The aim of today’s holiday is to give you a chance to “admit you’re happy.” A smile or laugh at some of the absurdities of life as well as a true appreciation for the good things all around us makes each day better. So find your “happy place” and giggle along with today’s book!

There’s a Giraffe in My Soup

It seems that in such a fine establishment ordering the Special of the Day—Sonia’s Tomato Soup—would be easy, but for one little boy it is anything but. “Excuse me, waiter?” The boy politely summons the red-tuxedoed attendant, who is polishing crystal to a diamond sheen. “There’s a giraffe in my soup!” Offended, the waiter pokes his verrrry long nose in the air and says, “That simply cannot be.” But when he comes nose to teeth with said errant ingredient, he speeds with the giraffe on his tray through the kitchen door.

Ah, a new bowl of soup is delivered post haste! But as soon as the bowl is set on the table, a little frog pokes its bulging eyes over the rim. Only it’s not a frog, but an alligator with its chompers ready to reverse the dining experience. It’s even seasoning the poor boy with pepper! Once again the waiter comes to the rescue.

Before the waiter even lifts the cover from the next bowl of soup, a suspicious blue trunk emerges. The elephant flails in the small bowl of soup as the boy yells for help. “Save her! Save her! Please hurry!” Before the elephant drowns, the waiter is on the scene. The next bowl fares no better. “Yak! Yak! Yak!” the boy shouts. “Yuck? Yuck? Yuck?” the waiter thinks, insulted by the young food critic. But no, indeed a hairy, horned yak has invaded the soup.

Bowl after bowl is delivered and with bowl after bowl the boy encounters a walrus (that balances the chair and the boy on his nose), an ostrich (with its head in the soup), a koala bear (shhh…it’s sleeping), a snake (burp…it swallowed the boy!), and a whale (well…you can imagine). The bruised and sweating waiter slumps on the table with his last offering. “Here, huff at last. Your soup, huff roaring with flavor.”  “Lying? Lying? Lying?” the waiter has had enough and loses his cool. “Sure, I made a minor gaffe with the giraffe. Maybe I overlooked a whale. But when it comes to taste, I am a professional. Do not dare accuse me of…LION!! Why didn’t you say something!”

Trying to tame the lion with his platter and a fork, the waiter runs for the kitchen. He returns to the boy bandaged and on crutches to reveal that there has been a mix up. It seems the zoo was sent the restaurant’s food and the restaurant was sent the zoo’s animals. The little boy is magnanimous and ready to let bygones be bygones. “Let’s skip the soup. Maybe dessert?” The waiter agrees.

He wheels out the dessert cart to present “one mousse…with a cherry on top!” And while the whipped cream and sprinkles look appetizing, the hooves and antlers? Not so much. “Never mind!” says the boy. “I’m eating somewhere else!” He quickly hops on his Big Wheel tricycle to follow the parade of animals on their way back to the zoo.

Just as it’s impossible not to laugh at the perennial favorite restaurant joke—“Waiter, there’s a fly in my soup!” / “What’s a fly doing in your soup?” / “The backstroke”—There’s a Giraffe in My Soup creates giggles on every page. Ross Burach creates a great comedy team in the little boy who only wants a bowl of soup and the snooty waiter who aims to please. Their dialogue crackles with puns, misunderstandings, and witty banter. Mixed in to the recipe are the creatures—some clueless, some dangerous, and some just out of their element—that act as the catalyst for the animated facial expressions and frenetic action that propel the story. Vivid colors, a variety of typography, and some of the cutest zoo animals ever complete the entertaining effect.

There’s a Giraffe in My Soup is sure to be asked for again and again and would be a very welcome addition to any child’s library.

Learn more about Ross Burach and view his illustrations on his website!

Reader! There’s a book trailer in this blog post! 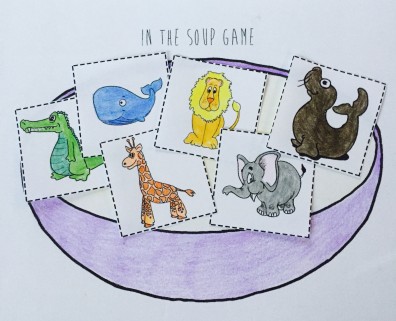 In the Soup! Game

Play this fun and easy game to fill your bowl with a variety of animals!