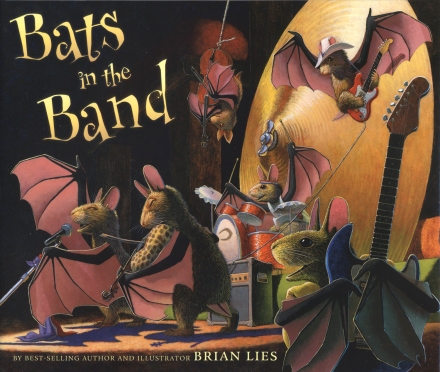 From the time that darkness falls on August 27 until the sun rises on August 28, people in more than 30 countries organize walks, talks, and all kinds of educational and fun activities related to bats and their conservation. Why not find an event in your neck of the woods—or cave—and celebrate this most unusual and beneficial animal!

Bats in the Band

Huddled together a colony of bats sleeps through the winter, but as the icy weather warms they stretch their wings and take flight to find food. As they swoop through the air chasing the echoes they hear, these animals that live by echolocation sense “that something’s not right. / And then when a bugle blast shatters the night, / that one lonely note tells us just what is wrong: / We’re hungry for sound—we’ve been silent too long.”

The bats swarm to a summertime theater now quiet and dark except for a small glow that invites  them inside. They enter the building—passing hawkers of T-shirts, posters, and hats—and set up the stage and the lights. Some bats have brought their own instruments while others improvise with the leftovers of last season’s concertgoers. “Behind the stage curtain, they’re getting in tune, / making up things out of straws, out of spoons.” 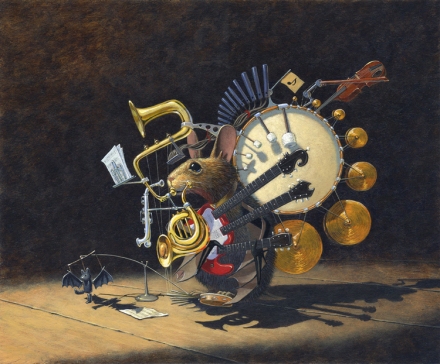 Finally, the conductor lifts his baton, and the concert begins. “We sing together as one voice. / It seems the very walls rejoice! / All together, rafters ringing… / it’s as though our souls are singing.”  Then the strings “change the mood to sweet and mellow” before a one-bat band takes over. “Next up, there’s a country song—/ some lonesome bat done someone wrong. / He’s  gone and broken someone’s heart. / Now everything has come apart.”

There’s even an entertainer for children far off in a corner where the pups can run and play. Now on stage a blues singer “cries of lonely days and empty skies” that make the bats cry. “It’s hard to figure—eyes get wetter, / …so how is it that we feel better?” There’s not much time for reflection though as a hard-rock band begins “blazing,” “pumping,” and “jumping.”

While everyone is dancing to the beat, the sun begins to rise signaling that it’s time for the bats to go. But in one last blast, all the musicians jam together. “The music soars. Finale’s here, the ending of the song. / It builds and builds—now here it comes! / It’s going…/ going…/ GONG!” With that last bang of the cymbal the bats, “worn out, wrung out, half asleep,” fly from the theater and out into the dawning day. In the air they discover the music in everything from “the roar of a car, or the bark of a pup—/ the sound of the rest of the world waking up.” As they fall into slumber up in their cozy rafters, the bats continue to sway unconsciously. “It’s not our intention, but you understand. / We’re dreaming of being the bats in the band.”

Brian Lies “Bat” books are well-known and well-loved. Bats in the Band continues the excellent storytelling and poetry of his other titles, this time to a rock-n’-roll beat. The idea of bats needing to hear sound after a long winter’s silence is brilliant, and these bats play almost as many different styles of music as there are species of bat. The rhyme scheme is true and musical, carrying the story well through its words and rhythm.

Lies’ illustrations remain as clever as ever. The two-page spread of the bats choosing and tuning up their instruments is a joy. Bats make a xylophone from keys hanging on a peg board and two nails for mallets. Instead of a harp, a bat plucks the tines of a plastic comb, and a bendy straw serves as a fine wind instrument. The string section plays while hanging upside down (of course!). The pups’ entertainer will bring a smile to readers’ faces, and the blues singer performs under cool blue lights.

Kids and adults will love lingering over the detailed pages, where allusions to actual concert atmospheres abound. Look for the bats holding aloft lightning bugs in a tribute to a long-held tradition.

Bats in the Band is a rockin’ addition to Brian Lies collection and will be welcome on any child’s shelf—whether they are completing the set or just starting it!

Visit Brian Lies‘ website to learn more about him, view his many books, and see a gallery of his artwork. 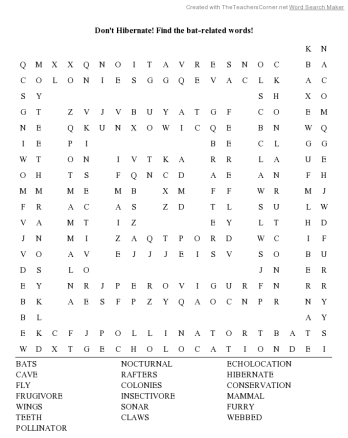 Find the bat related words in this printable Spiraling Bats Word Search that dips and soars like the flight of a bat! Here’s the Solution.