The Endangered Species Act was signed into law in by President Richard Nixon on this date in 1973.  The primary law in the United States for protecting imperiled species, the Act protects critically imperiled species from extinction as a result of the consequences of economic growth and development undeterred by concern for conservation. The US Supreme Court called it “the most comprehensive legislation for the preservation of endangered species enacted by any nation”. The purposes of the Endangered Species Act are to prevent extinction and to recover species to the point where the law’s protections are not needed, therefore protecting diverse species as well as the ecosystems in which they live or depend on. Today’s book reveals the story of a National Park that provides a unique refuge for many rare and endangered species. To celebrate the holiday, learn more about how the Endangered Species Act affects your state.

Thanks go to Albert Whitman & Company for sharing a copy of A Voice for the Everglades: Marjory Stoneman Douglas with me for review consideration. All opinions on the book are my own.

A Voice for the Everglades: Marjory Stoneman Douglas (Part of the She Made History Series)

“Long ago a trickle of water / spilled from a lake / and formed a tiny stream.” The stream spread until it covered almost half of the state of Florida, creating a shallow lake that moved like a slowly running river – “a river bursting with wildlife, / whispering to the world / to listen, to notice, to discover its wonders.” Mangroves and cypress trees grow from the water, the soil fed by the cycles of growing and dying sawgrass. The water, trees, and grass attract a “rainbow of birds” that wade in the shallows, hunting for food. “These are the Everglades. / The wildest, richest, and most diverse ecosystem in all the world – / every plant and animal needing another to survive.” 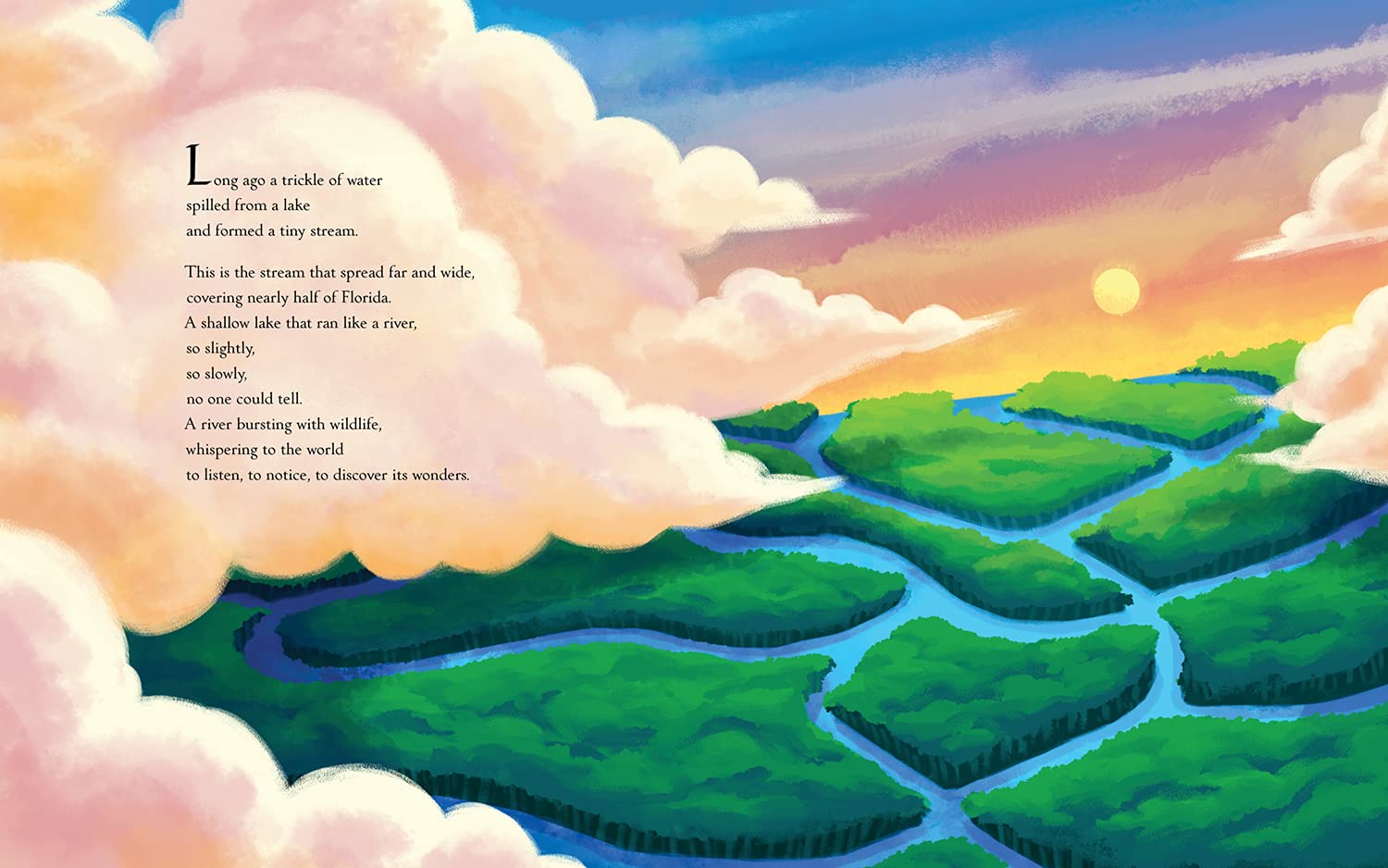 But leaders and developers wanted to drain the water to create land to build on, land they could sell, land with which they could make money. They pumped the water out and built dams and drains to make farmland, but the farmland turned dry and burned easily. The animals and birds fled. The ecosystem was “desperate for a voice to protect them.”

When Marjory traveled from Massachusetts to Florida and saw the beautiful scenery, she knew immediately that this was her new home. She made a friend, Ernest, and together they spent time paddling a boat through the Everglades, “watching whirling wheels of white birds dance” and spying panthers, alligators, turtles, manatees, and more of the animals that lived there. Where other people saw a swamp, Marjory and Ernest saw “treasure.”

Marjory and Ernest wanted to do something to preserve the Everglades. They studied the map and the formation of the Everglades. Marjory called it “a river of grass.” Ernest wrote a bill for the United States Congress to consider, and “Marjory wrote a poem, / hopeful it would move Congress.” Although lawmakers did tour the Everglades and see its miraculous sights, the bill did not pass. 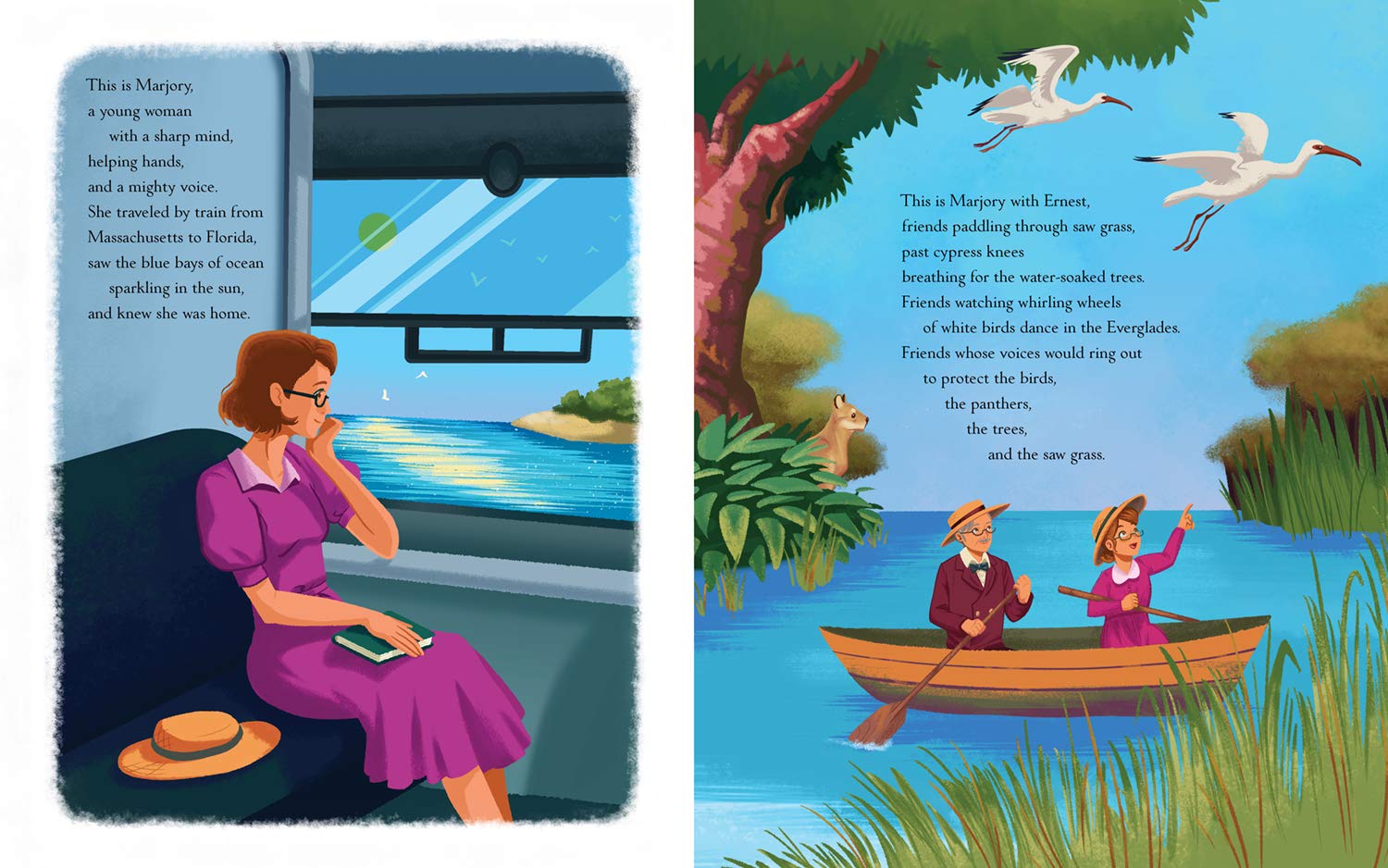 Marjory decided to write a book about the area she loved, and in 1947 The Everglades: River of Grass was published. Her book helped people see the marvels that lived within the Everglades: “the manatee munching seagrass / protecting her calf from harm”; “the red-bellied turtle, / laying eggs in the abandoned alligator nest, / dry and protected from water.”; the only place in the world where an alligator and a crocodile live together.”

At last people began to take notice – and care. Their voices joined with Marjory’s and Ernest’s and Everglades National Park was established that same year. “Yet only one-fourth of the Everglades was protected.” Marjory understood that “all the ecosystems needed one another.” When plans to build the world’s largest airport on land that was part of the Everglades, Marjory, now eighty years old, established the Friends of the Everglades, and their three-thousand voices convinced President Richard Nixon to stop the building.

Marjory continued to fight for the Everglades, giving speeches and putting hecklers in their place. When she was ninety-nine years old, Marjory could be found chipping away at a concrete drain to restore the land to its former waterway. At 105 years old, Marjory was awarded the Presidential Medal of Freedom. Adults and children sent her letters thanking her for saving the Everglades, but Marjory knew there would always be more work to be done to protect this unique ecosystem.

Back matter includes an extensive, illustrated discussion of the Everglades ecosystem, the nine different habitats that make it such a unique area, and many of the plants, animals, birds, and fish that call it home. More on the life of Marjory Stoneman Douglas and her legacy as well as how readers can help the Everglades are also included.

A compelling biography of a woman with vision and grit who took on a nearly impossible task and saved one of the world’s unique environmental treasures, A Voice for the Everglades: Marjory Stoneman Douglas will inspire young environmentalists and would serve as a captivating resource to begin studies about ecosystems, conservation, endangered and rare species, and many other topics revolving around nature science. Marjory Stoneman Douglas, whose perseverance, dedication, and voice still resonate today, continues to be a role model for children and adults alike.

Through Vicki Conrad’s lyrical text and light incorporation of a “This is the House that Jack Built” cadence readers see how people’s actions build on and affect each other – whether detrimentally (as the building plans; pumps, dams, and drains; and disappearing wildlife do) or beneficially (as Marjory’s and Ernest’s appeals to Congress, Marjory’s writings, and her continued advocacy do) and understand that once voice can make a difference. Conrad does an excellent job of portraying the beauty and uniqueness of the Everglades and giving kids a view of the many wonders to be found there.

In their vivid illustrations, Ibon Adarne and Rachel Yew depict the rich colors of the diverse flora and fauna found in the nine cohesive habitats, from the vibrant pink roseate spoonbills to the purple passion flowers to the elusive crocodiles and the breathtaking, fiery sunsets that blanket them all. Adarne and Yew also allow children to navigate the meandering waterways that weave through the mangroves and sawgrass in their slow, steady, and life-giving pace. The breadth of wildlife within the pages offer many opportunities for further learning and research at home and at school.

An enticing and educational look at one of the world’s most valued natural treasures – whose story and resources continues to influence nature studies and advocacy today – A Voice for the Everglades: Marjory Stoneman Douglas is a book that every school and public library will want to add to its collection and would be an inspiring inclusion for home bookshelves for nature lovers and homeschoolers.

Discover more about Vicki Conrad and her books on her website.

Travel to the Everglades and see the diverse wildlife that lives there with this printable coloring page!

You can find A Voice for the Everglades: Marjory Stoneman Douglas at these booksellers

To support our local independent bookstore, order from