Chana Stiefel is the author of more than 25 books for children, both fiction and nonfiction. Her most recent picture book is LET LIBERTY RISE (illustrated by Chuck Groenink, Scholastic, 2021), the true story of how children helped build the Statue of Liberty. Her next nonfiction picture book, THE TOWER OF LIFE, is the biography of Yaffa Eliach, a Jewish historian and survivor of the Holocaust who rebuilt her village in stories and photos to create the Tower of Faces in the U.S. Holocaust Memorial Museum in Washington, DC (illustrations by Susan Gal, Scholastic, 2022). Other picture books by Chana include MY NAME IS WAKAWAKALOCH!, illustrated by Mary Sullivan (HMH, 2019) and DADDY DEPOT, illustrated by Andy Snair (Feiwel & Friends, 2017).

Welcome, Chana! I’m really glad to have you joining me for a one-question interview this summer! As the Statue of Liberty National Monument is part of the National Park System, Let Liberty Rise! is a perfect book for celebrating Park and Recreation month, which encourages people to get out and enjoy America’s beautiful national parks and all they have to offer.

I know how much you love to connect with your readers. Can you talk about a poignant thing that happened during one of your visits this year?

My newest picture book Let Liberty Rise! How America’s Schoolchildren Helped Save the Statue of Liberty (illustrated by Chuck Groenink) launched from Scholastic on March 2nd. Soon afterward, I received a phone call from the youth director at a local synagogue asking if I’d be interested in doing an in-person reading to children on a Circle Line Cruise to the Statue of Liberty.

I nearly dropped the phone.

“It will be socially distanced and everyone will be masked,” she said. “The event will be on Passover [the holiday of freedom]. Maybe you can talk to the kids about the meaning of liberty?”

“So let me get this straight,” I replied. “You’re asking if I would like to read my book about the history of the Statue of Liberty to children in front of the statue herself?” Having received my second vaccine, my answer was an emphatic, “YES! OMG, YES!”

On April 1st, anchors away! My family and I joined over 100 people on the Circle Line’s maiden cruise in the wake of the Coronavirus, including Jim Morgan, owner of the Curious Reader bookshop, who helped me with a book signing. For the first time since the pandemic began, I shared with children (real, live children!) the story of how, in 1885, school children contributed their hard-earned pennies to build the pedestal of America’s most beloved statue.

And then, there we were! Floating on a boat at the base of the Statue of Liberty. It was magical. 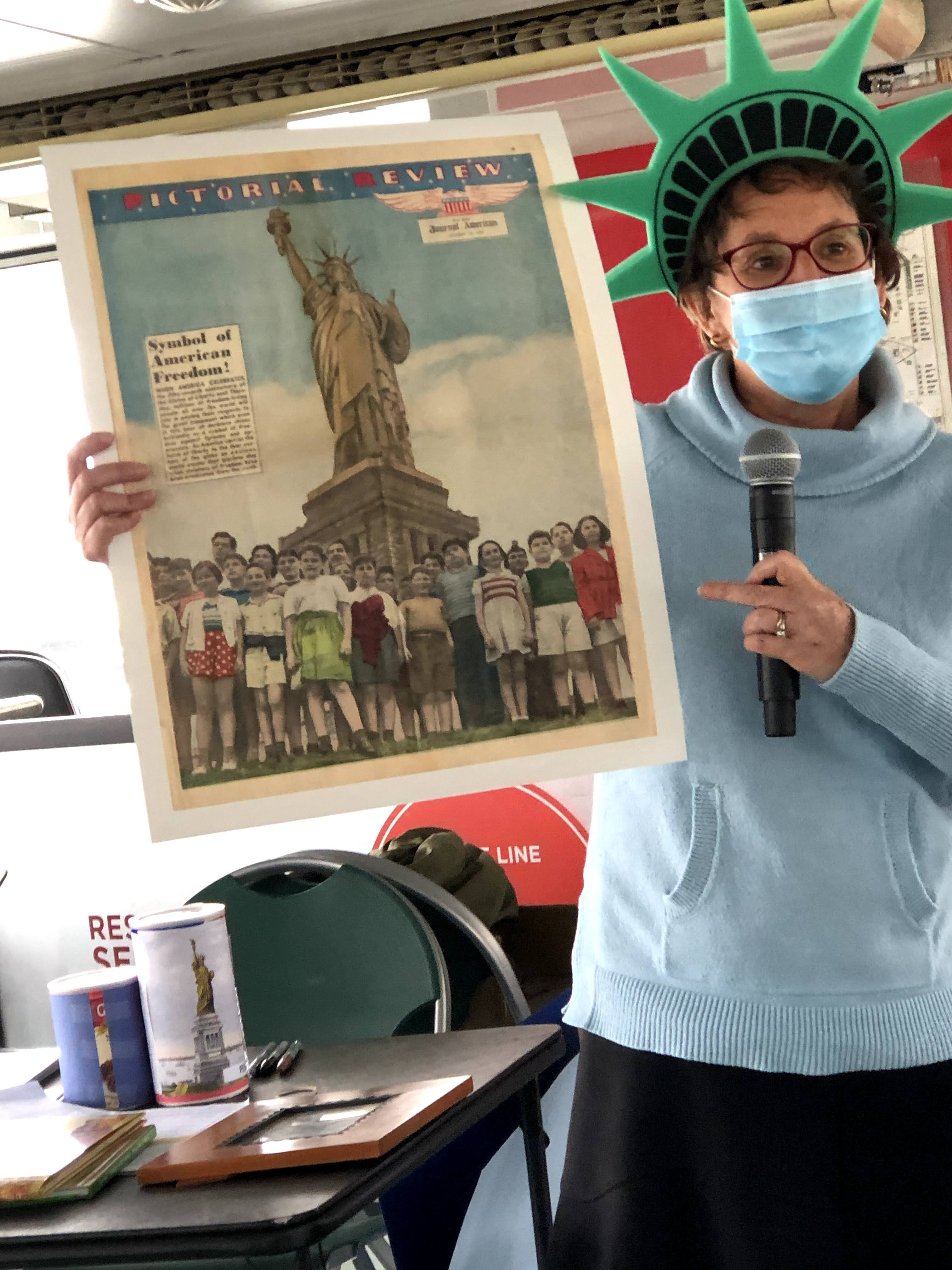 On our return to dock, I shared with the children the story of my late mother-in-law, Hannelore Guthof Stiefel, who escaped Nazi Germany as a young child. She arrived with her parents in New York City in 1941. One of our family’s most cherished possessions is a full page of the Journal American newspaper from October 24, 1943. It shows 11-year-old Hannelore in a red and white striped dress as a new immigrant standing with her classmates in front of the Statue of Liberty! Hannelore grew up and married my father-in-law Arnold Stiefel, also a German Jewish immigrant, who then returned to Germany as an American soldier. They moved to Bergenfield, NJ, where they became the 18th family to join Congregation Bnai Yeshurun (CBY)—the very same synagogue that invited me on the boat cruise. CBY, by the way, now has over 600 families!

So there you have it: At the tail end of this terrible pandemic, a live reading to children at the base of the Statue of Liberty with my family’s immigration story.

What a fabulous, unforgettable experience – for you and the kids! Thanks so much for sharing it and your wonderful pictures!

Let Liberty Rise! How America’s Schoolchildren Helped Save the Statue of Liberty

When Lady Liberty arrived in New York after a long voyage from France, her unassembled parts sat in crates instead of standing tall over the harbor. Why? No one wanted to pay for the pedestal needed to give her a strong foundation. Upset about people’s disinterest, Joseph Pulitzer announced that he would publish the names of every person who donated to the cause – no matter how much or how little they gave. Children answered the call, and their pennies, nickels, and dimes rolled in, eventually adding up to the $100,000 needed to build the pedestal.

Now everyone could see America’s monument to “freedom and hope,” and the Statue of Liberty welcomed the immigrants who sailed to our shores in steamships from around the world. Today, Lady Liberty still stands “thanks to the contributions of people all across America — and children just like you.”

Chana Stiefel raises children’s empowerment, excitement, and pride in what they can achieve in her uplifting true story of how children were instrumental in building the foundation for the Statue of Liberty. Her straightforward, conversational storytelling shines and the inclusion of quotes from children’s letters at the time will impress and charm today’s kids.

Chuck Groenink’s delightful mixed-media illustrations inform readers on every page about the time period surrounding, the personalities involved in, and the scale of the project to build the pedestal for the Statue of Liberty. Images of kids donating their hard-earned change, knitting socks to sell, sacrificing candy and trips to the circus, and creating special clubs to raise money will remind today’s charitable readers that they are carrying on a proud tradition to make a difference to their community and their country.

Discover more about Chana Steifel and her books on her website.

You can learn more about Chuck Groenink, his books, and his art on his website.

Check out these other picture books and middle grade books by Chana! 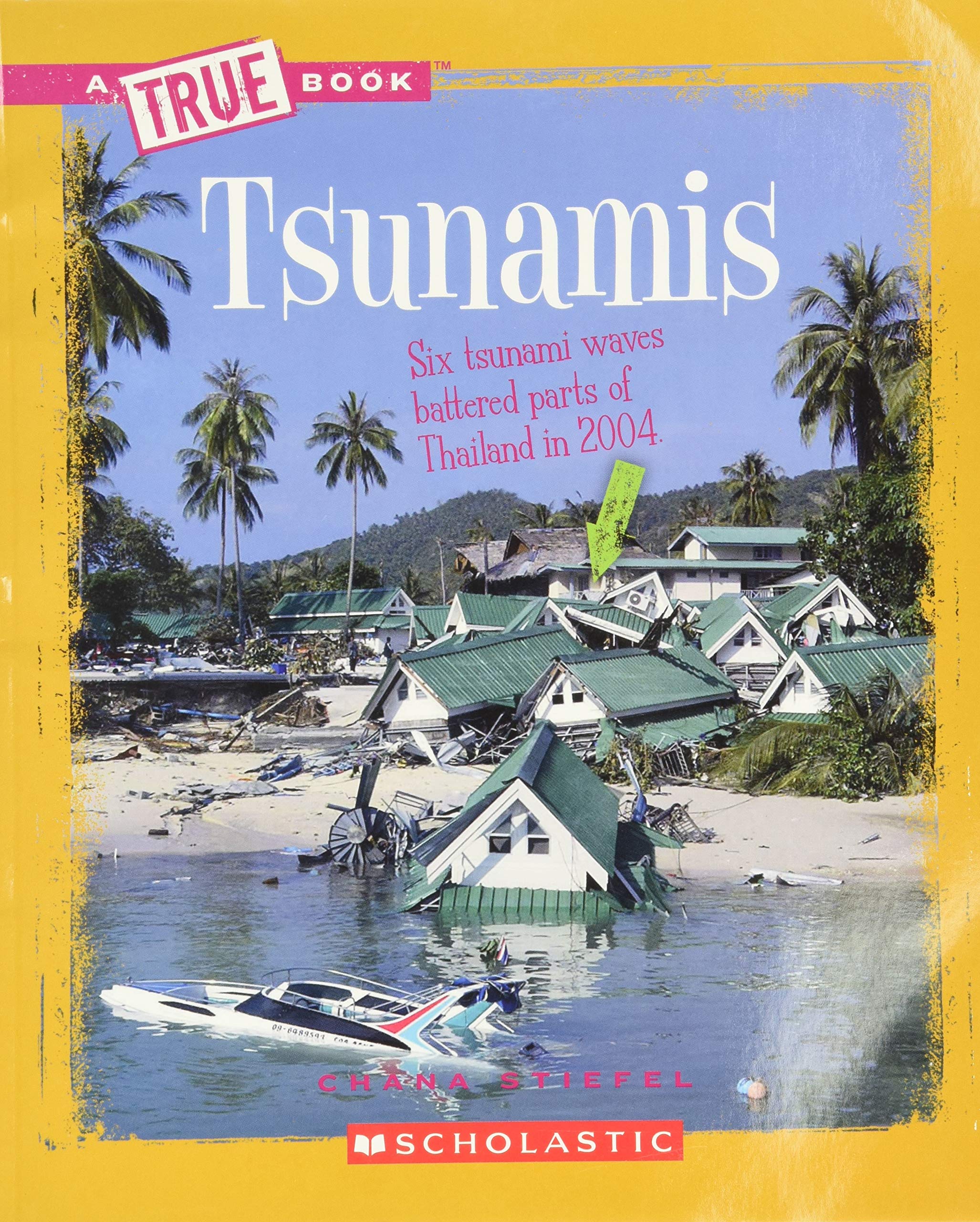 You can find Let Liberty Rise! at these booksellers