Things are good! Really, they are! Sometimes it’s kind of hard to think this way, but Positive Attitude Month encourages people to see the bright side of things. A positive attitude can give you more strength and resources to face the hard stuff while letting you enjoy the good stuff. Because there is good stuff out there just waiting for you—really!

Bear is patiently waiting at the bus top. He’s been there since the sun came up. It’s no bother because he’s expecting his best friend, Goliath. While Robin builds her nest, Bear tells her about Goliath. He’s stronger than Bear and smart too. “‘He can count to eighteen!’” Bear exclaims proudly. Nighttime comes, but Goliath doesn’t. Bear curls up on the bus stop bench and goes to sleep.

Another morning dawns and as Bear inspects a spider web and Robin’s babies peep, peep for food, Robin suggests some bad news: “‘Your Goliath isn’t coming.’” Bear is positive his friend will arrive, though. “‘He is definitely coming. You’ll see,’” Bear counters. Later, while Bear has left his post for a minute, the robins announce that someone has come. Bear has a foolproof sniff test to determine if it is Goliath. When the answer comes back that this creature does not smell nice, Bear growls, “‘Then it’s not Goliath.’” 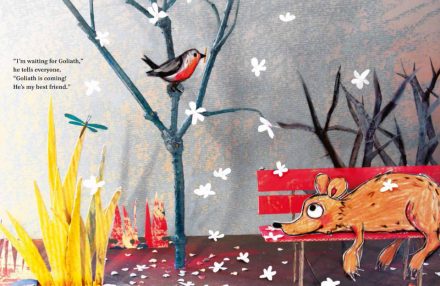 Finally, a bus arrives but no one gets off. Bear is starting to get lonely because the robins have all flown south for the winter. To keep himself occupied, Goliath sometimes dances or plays with the snowflakes that begin drifting down. Sometimes he even forgets what he’s there for. As winter settles in, Bear grows more and more tired. He lies down under the bench and goes to sleep. He awakes to warm air and sunshine.

Suddenly, “he hears a faint noise like a hand sliding slowly across paper. Goliath is coming!” A little snail slithers up full of apologies for being so late, but Bear is just happy to see him. He has big plans for the two of them. After so much time spent on the ground, they take to the swing at the park and soar.

As an avid reader of Samuel Beckett’s work, I couldn’t help but smile when I saw the title of Antje Damm’s new book. As in the play Waiting for Godot, readers of Waiting for Goliath wonder “who is the mysterious visitor?” Unlike Vladimir and Estragon, though, Bear does finally meet up with his friend—much to the delight and surprise of little readers.

Some expectations may be set when Bear describes his best friend as stronger than he is, very smart, and nice-smelling; there’s also the matter of his name. Put these all together and most kids may imagine a big, friendly giant of a buddy. On the other hand, time seems a bit wonky. It’s been a year since Bear first took a seat at the bus stop. What could be taking this enormous creature so long to get there? So maybe readers will adjust their guess. Just like Bear, kids are also waiting to discover who is coming.

During that year, readers are treated to Damm’s very original collage-diorama photographs. With unending patience Bear, whose head, body, and legs seem articulated from separated bits of paper, sits on a red cardboard bench. The paper bus stop sign and trash can are attached to a thin wooden skewer. Cardboard grass springs from the ground, and the tree takes center stage through a year of seasons demonstrated by the robin’s building a nest, raising a family, flying away for the winter, and returning once more. Along the way, colors change, new creatures enter and leave, and Bear changes position. Goliath’s appearance comes as a cheerful surprise, and as the two go off to play together, readers will feel that the wait was definitely worth it.

Waiting for Goliath would be an adorable addition to children’s home libraries for happy story times and times when waiting gets…..long. 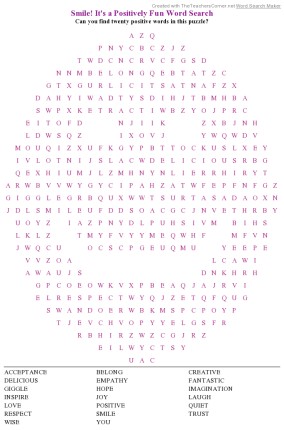 Positivity makes you smile! And this puzzle is full of positivity! Can you find the twenty upbeat words in this printable Smile! It’s a Positively Fun Word Search Puzzle? Here’s the Solution.