This month we celebrate something that you can’t see or hold but which is real all the same. What is it? An idea! Ideas are amazing things. Sometimes seemingly conjured up out of thin air; sometimes borne out of necessity as in today’s book; and sometimes the “Eureka!” result of long, hard work, ideas fuel our arts, sciences, education, and home life. So today, write down those ideas you have while driving or commuting to work, while in the shower, when you’re daydreaming, or just as you turn off the light to go to sleep. You never know what they might become!

The Floating Field: How a Group of Thai Boys Built Their Own Soccer Field

Like all of the villagers living on the small island of Koh Panyee, Prasit Hemmin’s home was built on stilts. His father was a fisherman, and every morning Prasit helped him load his boat before school. Today was an exciting day, and Prasit hurried to meet his friends at Uncle’s coffee shop. They had big decisions to make: “Who will carry the poles? Who’s on which team? Who gets to kick off first?” The full moon had come and later the tide would go out. 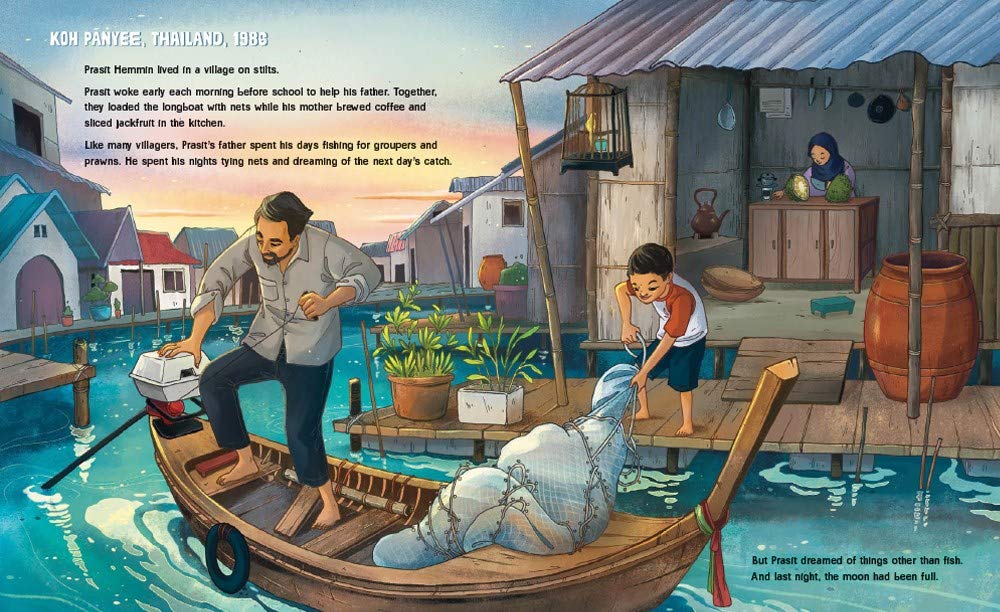 By the time school was over, the sandbar with its glittering sand was ready, beckoning to the boys to come play. They set up their goal and dropped the ball then “they dug in their toes and chased it across the hard-packed ripple of sand. They weaved in between other players to get open. And when they got close, they took a shot. GOAL!” The boys played until the sun went down and the fisherman’s longboats returned home. Then they “could only dream about playing until the tides were low enough once more.”

Fortunately, the World Cup was being held this month, and the boys watched the games on the small TV at Uncle’s coffee shop—“the only one on the island.” The boys decided that they needed a team of their own. But where would they play? Prasit looked around at their floating village and had an idea. They could build their own field. The next day, they collected materials and got to work. With planks and barrels, they built a platform. When it was ready, they tethered it in place, painted the lines, and put up goals.

Every day, Prasit and his friends played on their floating field, learning some fancy footwork to avoid rough spots on the boards. The villagers who once thought they were crazy for building the field now stopped to watch. One day the boys heard about a tournament being held on the mainland, and they signed up. On the morning of the tournament, just before they left for the mainland, the villagers surprised them with new uniforms and “the Panyee Football Club was born.”

The boys stood nervously on the field before their first game began, but once the ball was in play, they knew just what to do. “They passed it down the field. They weaved in between other players to get open. And when they got close, the took a shot. GOAL!” The Panyee Football Club won several games, but by the afternoon, the weather had turned and rain pelted the field. While their opponents knew how to play on the soggy field, the Panyee boys didn’t. At halftime they were down 2 – 0. Prasit had an idea.

Back on the field, the boys ran barefoot, just as they did at home. They were quicker and more agile, and they were able to tie the score. But with only minutes left in the game, the other team scored—and won. “But that day, in their very first tournament, the Panyee Football Club came in third place.” On the boat ride home, the boys celebrated, eager to get back on their floating field “where they could play the game they loved, whenever they wanted.”

Extensive backmatter includes an Author’s Note, complete with photographs, reveals some unusual places soccer is played and more about how this story came to be; a note from Prasit Hemmin about his childhood experiences and the future success of the football club he and his friends started; and a glossary of soccer vocabulary in English and Thai with pronunciation tips. There is also a list of resources for further reading.

Soccer fans and sports lovers of all kinds will find the story of Prasit Hemmin and the soccer field he and his friends designed enthralling. The idea that these boys could only play their favorite game twice a month will be eye-opening for kids used to daily or weekly practice, and their ingenious solution will inspire them to greater problem-solving. Through Scott Riley’s detailed storytelling, readers gain knowledge about life on the small island of Panyee as well as how the boys built their floating field. Riley also showcases the camaraderie between the boys and the pride of the villagers, making this a beautiful story of community.

Through various perspectives, Nguyen Quang and Kim Lien’s gorgeous and vibrant illustrations introduce readers to the island of Panyee with its dense collection of homes and businesses that left no room for a soccer field. The blue ocean water shimmers under the sun and ripples where longboats skim over the surface. Immersive images take kids into the Hemmin home and Uncle’s coffee shop, where Prasit’s mother makes breakfast while Prasit and his father ready the fishing boat for the day. Depictions of the boys playing soccer on the sandbar and later on the floating field they built are exciting and full of action. Soccer players may be fascinated by the proportions of the floating field and its goals and appreciate the precision with which Prasit and his friends scored. The contrast between the island and the mainland soccer field will also give readers an appreciation for the Panyee Football Club’s accomplishment in winning third place in their first tournament.

A stellar addition to any child’s library as well as to classroom and homeschool geography, STEM, and multicultural lessons, The Floating Field: How a Group of Thai Boys Built Their Own Soccer Field is highly recommended for home, school, and public library bookshelves.

Discover more about Scott Riley and his book on his website.

To learn more about Nguyen Quang and Kim Lien, their books, and their art, visit their website, Kaa Illustration.

Learn more about this unique village with this video about Koh Panyee!

You can find The Floating Field: How a Group of Thai Boys Built Their Own Soccer Field at these booksellers