Established in 2014 and sponsored by the U.S. Court Tennis Preservation Foundation with support from world-wide national tennis governing bodies and associations, today’s holiday aims at raising interest in the game of tennis. One goal of the day’s celebrations is to have simultaneous matches, tournaments, and exhibitions at tennis clubs, schools, and universities around the world. Those who participate are encouraged to upload images to social media with the hashtag #itennisday. Why was June 20 chosen for this holiday? It commemorates the Tennis Court Oath of June 20, 1789, on which date nearly 600 people packed a tennis court near the Palace of Versailles during the French Revolution in a show of hope and solidarity. A painting of the event by Jacques-Louis David honors this pivotal protest. To celebrate, grab a racquet and head to a court near you.

Thanks to Page Street Kids for sending me a copy of Serena: The Littlest Sister for review consideration. All opinions about the book are my own.

On that day when “Serena stood in Arthur Ashe Stadium and kissed the trophy,” her fans, sisters, and parents cheered. How had that day come about? It started thirteen years earlier when Serena, then four years old, joined her older sisters on the tennis court where their dad coached them. As he showed Serena how to swing, her sisters celebrated when she hit one and ran after the ones she didn’t. Mostly, the equipment they used was old and donated. Sometimes the balls had even lost their bounce, but “their father explained that it was good practice for Wimbledon—a Grand Slam tournament where the balls bounced lower because the tennis court was made of grass.”

When they weren’t on a real tennis court, the girls played a pretend game of tennis on the sidewalk. Serena loved when she won these games “because, well, Serena loved being the star.” As they grew older, their father never allowed them “to use the word can’t.” Their mom told them, “‘Whatever you become, you become in your head first.’ So the girls dreamed of what they could become.” While the other sisters became a nurse, a lawyer, and a singer, Venus and Serena became top tennis players.

Venus was taking the tennis world by storm with her hard hitting, speed, and 100-miles-per-hour serve. Serena wanted to play in tournaments too, but her father said she wasn’t ready. But one day, Serena noticed an application for a tournament Venus was playing in. Serena filled it out and sent it in. At the tournament, Serena snuck off to play on one court while her parents watched Venus on another. Serena ran her opponent ragged and won the match.

Serena thought her father might be angry, but instead he was proud and began teaching her how to play against her next opponent. “Serena won all her matches, moving up and up until…she faced her big sister in the final match.” During the match, Serena asked Venus to let her win one game, but Venus ignored her plea. Later at home, though, Venus traded her gold trophy for Serena’s silver one. “Serena cherished that trophy.” Serena idolized Venus and did everything she did until her father reminded her that she was her own person. Some people didn’t think Serena would have the success Venus did, but her oldest sister told her, “‘You’ll have your day. And it’s gonna be even bigger.’” 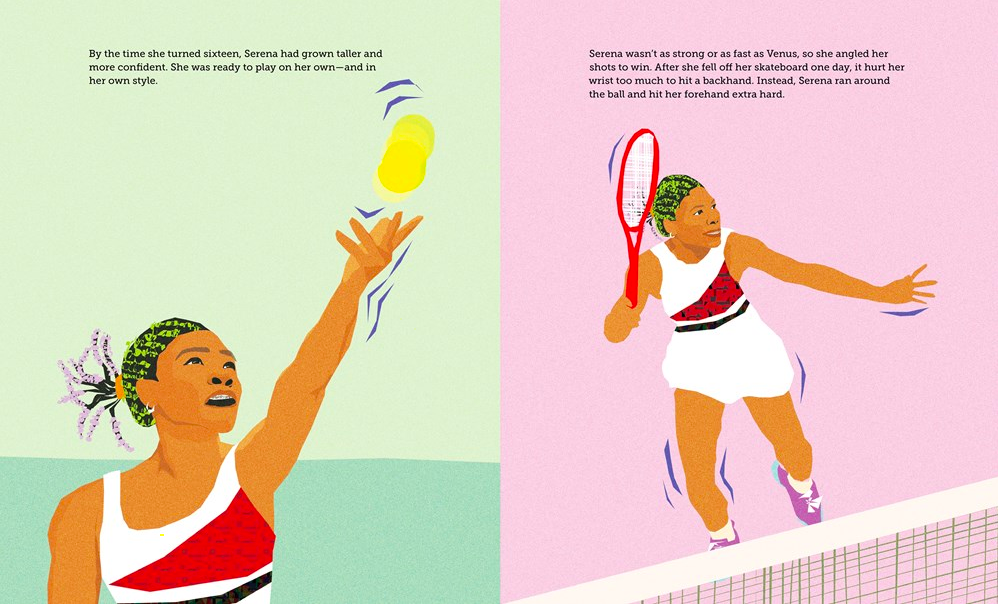 After several years of winning, Serena, Venus, and her family moved to Florida for training. On those courts the girls stood out for their skin color, their beaded braids—and “their powerful strokes.” When Venus was fourteen, she was allowed to enter professional tournaments. She won her first match. When Serena turned pro, she didn’t win. The two teamed up as doubles partners, and by the time she was sixteen, Serena had grown in both height and confidence. She had her own style of play too.

The sisters continued to play as a doubles team, and in 1999 they won the French Open Doubles competition. Venus was eighteen and Serena was seventeen. That same year, the sisters entered the US Open, the tournament Serena had long dreamed of winning. Surprisingly, Venus was knocked out early, but Serena kept winning her matches. In the finals she met the player who had beaten Venus. Serena served eight aces and “her fierce forehand earned her point after point.” Serena won the match and became “the first black woman to win a Grand Slam singles tournament in more than forty years.” At the awards ceremony, Serena thanked her dad, her mom, and her sisters for all of their support. The crowd cheered as cameras flashed. “And one of the many headlines of the day read, Little Sister, BIG HIT!”

An Afterword highlights other victories Serena and Venus have enjoyed during their careers, follow-ups on their sisters, and quotes from each of the five sisters.

Karlin Gray’s masterful biography of Serena Williams shows young readers the determination, confidence, and strong familial bond that followed Serena throughout her life and made her one of tennis’s most influential women players. The family’s remarkable life and focus on what one can achieve will inspire all kids, no matter what their dream is. Choosing seminal events in Serena’s and Venus’s life, Gray follows Serena’s reputation on the court as she loses and wins matches, building suspense until that day when she accomplishes her goal and wins the US Open. Her inclusion of articles and comments that cast doubt on Serena’s future success demonstrates that even the greats face opposition and naysaying, and Serena’s sister’s advice to ignore it is sound.

Monica Ahanonu’s textured, collage-style illustrations leap off the page with vibrant images full of action and the girls’ personalities. As the girls race onto a court for practice, their eager expressions show their love of the game and being together. Even as a four-year-old Serena has the steely-eyed gaze of a champion as she watches the bouncing ball and lines up for her swing. Ahanonu’s use of various perspectives and shadowing create dynamic scenes on the court, and tennis lovers will be thrilled at the many illustrations of Venus and Serena playing their sport. The bond between the sisters is evident in images of Serena interacting with one or more of her sisters. Those who remember Serena’s win at the 1999 US Open will recognize her joy.

Perfectly aimed at young readers who are the same age as Serena and Venus when they began developing their skills and sport, Serena: The Littlest Sister is an inspirational biography of a present-day role model that is sure to spark an “I can” attitude. Adults who have followed the Williams sisters’ rise to tennis stardom will be equally enthralled with this beautiful biography. The book would make a stirring addition to home, classroom, and library collections.

Discover more about Karlin Gray and her books on her website.

To learn more about Monica Ahanonu and her work, visit her website. 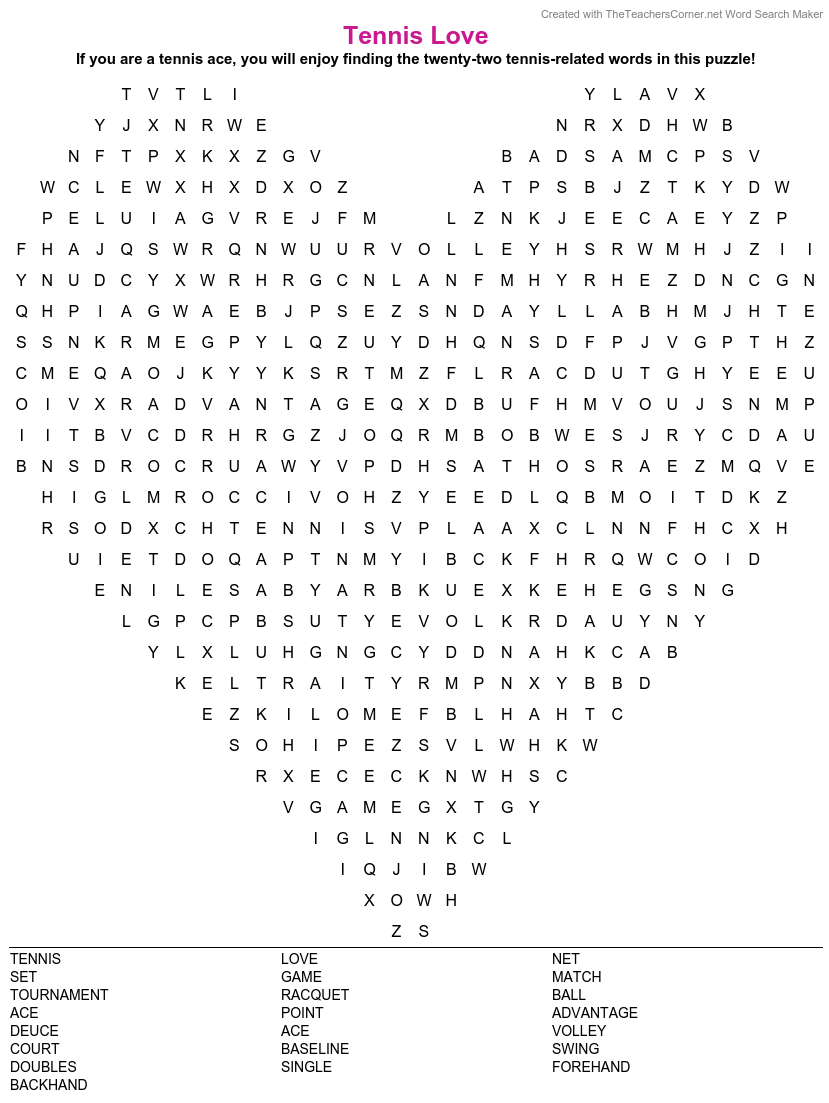 You can find Serena: The Littlest Sister at these booksellers