Today’s holiday recognizes the spirit of inventors—those women and men, girls and boys who look at life just a little bit differently and not only imagine the “what if?” but make it happen. Inventors come from all backgrounds and with all different kinds of experience. Today, we celebrate those pioneers of the past, present, and future! If you have a creative mind, today’s the day to tinker around with your idea. Inventions don’t always have to change the world. Have a better way of organizing your closets, a new game to play with your pet, or a new recipe to use the leftovers in the fridge? Go for it—and be proud of yourself!

Women in Science: 50 Fearless Pioneers Who Changed the World

“Nothing says trouble like a woman in pants.” With this revealing attitude from the 1930s, Rachel Ignotofsky introduces her scintillating biographies of 50 intelligent, self-confident, persevering, and inspiring women working in engineering, math, medicine, psychology, geology, physics, astronomy, and more sciences from ancient history through today. The book begins with Hypatia who lived in Greece in the late 300s to early 400s CE and became an expert in astronomy, philosophy,and mathematics, making “contributions to geometry and number theory.” She became one of Alexandria’s first female teachers, “invented a new version of the hydrometer,” and can be found among the intellects in Raphael’s painting “The School of Athens.” 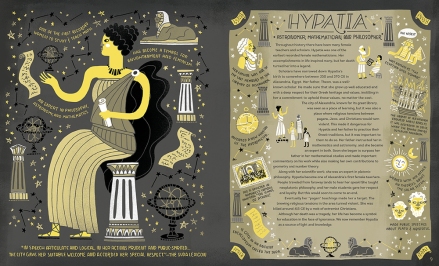 Zipping ahead to 1647 readers find Maria Sibylla Merian, considered one of the “greatest scientific illustrators of all time.” Her specialty was entomology. By carefully documenting the lifespan of butterflies, she taught people about the science of metamorphosis, publishing a book on the subject filled with notes and illustrations in 1679. Later she scoured the rainforests of South America, gathering information on never-before-seen insects from that region. Her book, The Metamorphosis of the Insects of Suriname “was published in 1705 and became a hit all over Europe.” Maria was so famous, her picture appeared on German money and stamps.

Other women in the nature sciences include Mary Anning, who as a child discovered the first complete ichthyosaur skeleton and went on to become a paleontologist; Mary Agnes Chase, a botanist and expert on grasses; Marjorie Stoneman Douglas, who as a conservationist helped save the Florida Everglades; and Joan Beauchamp Procter, a zoologist specializing in reptiles who discovered the Peninsula Dragon Lizard in 1923; and more.

One of the earliest women astronomers and mathematicians was Wang Zhenyi, born in China in 1768. Creating her own eclipse model, she proved her advanced “theories about how the moon blocks our view of the sun—or the earth blocks the sun’s light from reaching the moon—during an eclipse.” She also measured the stars and explained the rotation of the solar system. At the age of 24 she published the 5-volume Simple Principles of Calculation. Zhenyi died at the age of 29, but in her short life she published many books on math and astronomy as well as books of poetry.

Women in Science includes many other women who have looked to the stars and mathematics for their careers. Some of these are: Ada Lovelace, the first person to write a computer program; Emmy Noether, who helped Albert Einstein develop his theory relativity, created the field of abstract algebra, and “made new connections between energy and time, and angular momentum”; Cecilia Payne-Gaposchkin a quantum physicist in 1900s England who “discovered that the sun is made mostly of hydrogen and helium gas” and in 1956 became Harvard University’s first astronomy professor; Mae Jemison, who in 1992 became the first African-American woman in space and later started her own technology consulting firm as well as founding BioSentient Corporation, and a science camp for kids; plus many others.

The book also features Engineers, such as Hertha Ayrton who improved electric lights by inventing “a new rod that made a clean and quiet bright light” and the Ayrton fan that blew away mustard gas during World War I; and Lillian Gilbreth, who used her theories of “organizational psychology” in inventing the foot pedal for garbage cans, shelving for refrigerators, and even the “work triangle” for kitchens “that determines the distance from the sink to the stove” and saves time. There are Geneticists such as Nettie Stevens who discovered the “X” and “Y” chromosomes, and Barbara McClintock—the pants wearer from the beginning of the post—and the first person “to make a complete genetic map of corn” and discover jumping genes, or “transposons.”

The field of Medicine has benefited from women such as Elizabeth Blackwell, the first woman doctor; Alice Ball, a chemist and the first African-American woman to graduate from the University of Hawaii, who helped cure leprosy with her chemical work; and Gerty Cori who discovered how our bodies covert glucose, helping us better understand diabetes. In 1947 she became the first American woman to win a Nobel Prize. 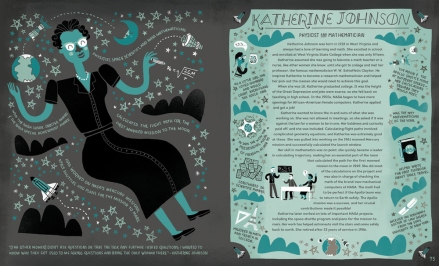 And this list only begins to scratch the surface of all the fascinating stories of women who overcame social, political, and personal obstacles to follow where their intelligence took them. Inspirational, entertaining, and undeniably eye-catching Rachel Ignotofsky’s Women in Science presents expertly written, one-page biographies that hit all the high (and sometimes unfortunate low) points in these scientist’s lives. The striking layout of both the text and illustrations keep readers riveted to the page, The left-hand side contains a representational drawing of the scientist surrounded by the subjects and materials of her work as well as trivia about her and a quotation. On the right-hand page, small illustrated facts frame the woman’s life story.

Interspersed between the biographies are pages offering a timeline of women’s milestones, depicting lab tools, and graphing statistics of women in STEM. The back matter is impressive, with two more pages presenting 15 more scientists, a four-page, illustrated glossary, resources including films, websites, and books, and an index. Rachel Ignotofsky concludes her book by saying, “Let us celebrate these trailblazers so we can inspire the next generation. Together, we can pick up where they left off and continue the search for knowledge. So go out and tackle new problems, find your answers and learn everything you can to make your own discoveries!”

To discover more books by Rachel Ignotofsky, visit her website!

What Kind of Scientist Would You Be? Word Search

Scientists like the women in today’s book make inventions for every area of life! In the future you might become a scientist and develop something new or different. If so, what kind of scientist would you like to be? Find the names of eighteen scientists in this printable puzzle! Then pick one and write why you would like to be that type of scientist!