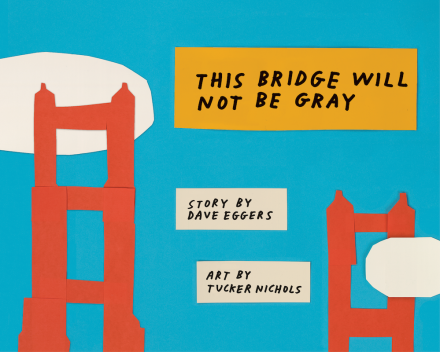 Bridges can do so much more than just take vehicles and people over waterways or highways. Many are beautiful structures that enhance the skyline or environment in which they’re found. Covered bridges, stone bridges, and soaring steel and cable bridges all inspire awe in their own way. Unfortunately, many older bridges are slated for destruction or replacement. To honor this month’s holiday, visit a historic bridge in your area or research famous bridges of the past and present.

This Bridge Will Not Be Gray

“In the beginning there was a bridge.” Well, to back up a bit there was a bay that led to the Pacific Ocean. The opening between the two shores that enclosed the bay was called the Golden Gate. “On one side of the Golden Gate was the Presidio, a military base at the top of the city of San Francisco. On the other side there were only hills, green and yellow, rising high above the sea.” Beyond these hills towns dotted the coastline.

People traveled between these shores by boat or by driving way out of their way. Many times people had thought about building a bridge across the bay, but they were afraid it would ruin the beauty of the land. At last it was decided that a bridge should be built. The year was 1928 and Joseph Strauss, an expert on bridges, was hired to design it. What he came up with looked more like the skeleton of a roller coaster, and while it would be strong, it would also be ugly.

People agreed that for such a beautiful spot, a beautiful bridge was needed. Joseph Strauss then asked for help in developing a plan for the bridge. Leon Moisseiff, known for designing the Manhattan Bridge in New York, came on board. Leon’s idea was for “a suspension bridge, one with swooping lines and tall towers.” The drawings were light and airy and…beautiful. People liked it very much.

“But still the bridge appeared a bit stern in style. So Joseph and Leon asked another person, named Irving Morrow, to help out.” Irving and his wife Gertrude had a different idea about what the bridge could be. With vertical fluting, “art deco flourishes,” pedestrian walkways, and curved lamps lighting the way, “the bridge could be both a bridge and something like art.”

Steelworkers in Maryland, Pennsylvania, and New Jersey built the pieces of the bridge. They were shipped to California by train and by boat. Finally, it was time to construct the bridge. Men had to dive deep into the icy waters of the Pacific Ocean and climb high into the sky while constructing it. It was estimated that it would take 4 years and thousands of workers to finish it.

First the tall towers were constructed. The day they were finished was one of “jubilation” and awe as“sometimes the things humans make baffle even the humans who make them. One aspect of the bridge that had not been decided was the color, and many people had opinions on that. “The Navy thought it should be yellow and black so that ships and planes could easily see it.”

“The Army wanted it to look like a candy cane for the same reason the Navy wanted it to look like a tiger with jaundice: so that it would be easily seen by planes and ships.” Most people, though, thought the bridge should be painted black, white, or gray like most other monuments, towers, and buildings. Right now, the bridge was orange—coated with a special anti-rust paint. As Irving Morrow watched the bridge go up, he thought this orange was a beautiful color.

He suggested that the bridge be allowed to stay this color. Others thought he was “nuts.” Never had there been an orange bridge before, “and for a good portion of the human race, because something has not already been, that is a good reason to fear it coming to be.” But the people of San Francisco began to see things Irving’s way. Still, gray seemed to be the safe choice.

Irving, who was usually a shy and quiet sort, began to get vocal about his color preference as the completion date of the bridge came closer. Other’s began to echo his thoughts and arguments. “This bridge will not be gray!” they said. At last “the powers that be” agreed with Irving. The bridge remained orange: International Orange, in fact.

But because the wind, rain, and sun are harsh on the orange bridge, it needs to be repainted every year. Every day some part of it is being painted by dedicated workers. Is that crazy? Maybe, “But people love to paint it, and people love to look at it. The Golden Gate Bridge, which is orange, is the best-known and best-loved bridge in the world” because it is “bold and courageous and unusual and even strange.”

San Francisco resident Dave Eggers has written a loving tribute not only about the very distinctive Golden Gate Bridge but to the equally distinctive, quirky, and even courageous Irving Morrow, other architects, and people of the Bay area who saw and championed art where others may only have seen function. Passages of straightforward narration are joined by rivets of whimsically inserted dialogue, soaring description, and moving insight to construct a lyrical story of vision and inspiration that both kids and adults will find fascinating.

Tucker Nichols’ paper cut illustrations are as playful and full of imagination as a kindergarten classroom. Using simple shapes and a gorgeous palette Nichols crafts portraits, collages, and landscapes that are movingly effective in depicting the San Francisco Bay area, the rising Golden Gate Bridge, and the personalities involved in this fun history of a beloved monument.

This Bridge Will Not Be Gray is a must for school and public libraries, a wonderfully inspiring addition to children’s bookshelves, and a colorful coffee table book for any home.

Click here to learn more about Tucker Nichols and his work.

Get out your markers, colored pencils, or crayons and color this printable Golden Gate Bridge Coloring Page!