Ever get tired of telling others to “have a nice day!” when you—or they–are not really feeling it? Do you work in the customer service industry (and who doesn’t in one way or another) and deal with difficult personalities on a daily basis but still need to smile and wish the person a good day? Well, today’s holiday was established to give us all a bit of relief and encourages people to end their interactions or conversations with the surprising “Have a bad day!” It’s probably safe to say that upon hearing this, even the grumpiest of grumps would have to smile—even a little bit—and acknowledge that maybe everything isn’t so terrible.

“Riverbend was a quiet little town—just a couple dozen buildings alongside a dusty road that led nowhere.” It was the kind of town the stagecoach passed through without even stopping, where nothing new ever happened. But one day Sheriff Ned Hardy did see something new—a bright light that flashed on and off in the western sky. He was sitting in the jailhouse, pondering this strange occurrence when Owen Buck, the blacksmith’s son, ran in with some news. “In between gasps, Ned Hardy heard the words ‘stagecoach’ and ‘something awful.’” 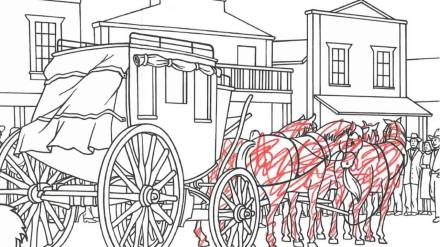 Outside, a crowd of townsfolk stared at the stagecoach, which was standing still at the end of the road. “The horses were covered with great stripes of some kind of shiny, greasy slime.” No one knew what this was or what had happened. Ned Hardy tried to remove the slime that hung from the horses “in loopy ropes or stuck out like stiff wire.” But as hard as he tried, the sheriff could not tear the stuff away from the horses’ bodies.

The stagecoach driver was nowhere to be seen, so Ned Hardy saddled his horse and went to search for him. Along the way he came upon the same strange markings he’d seen on the horses. It covered the ground and the cacti. He didn’t have much time to consider what he saw before he heard a sound nearby. The sheriff found the coachman lying behind a bolder. He was also “covered with the greasy slime. Thick stripes of the stuff ran right across his eyes and mouth.” Ned Hardy picked the driver up and put him on his horse for the ride back to Riverbend. As they passed over a ravine, they saw a herd of cattle, which also carried the odd, colorful markings. Once again the sheriff saw the flash of light over Riverbend. 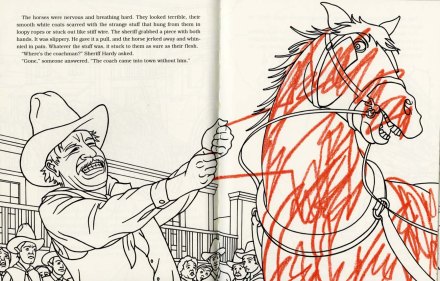 As the two rode back into town, they saw that even tidy Riverbend had not been spared. Some of the townspeople had been marred as well, and “they all told the same story: Without warning, the sky overhead had filled with a brilliant light, a light that froze everything it touched…’Like stepping out of a privy and looking straight into the sun at high noon,’ one of the cowboys said….When the light passed, they were covered with the greasy marks.”

Ned Hardy was not about to let his town down. He went outside to confront this mysterious foe. Inspired by his bravery, other townspeople joined him. Just then they saw the flash of light again. “‘Whatever evil thing has done this is out in those hills,’” Ned Hardy said, “pointing in the direction of the light. ‘I aim to ride out there and put an end to it.’” He took a posse out to the canyon, which was now a mess of greasy slime as well.

They rode on toward the horizon where the light always seemed to appear. But just over a hill they saw a most terrible sight. “There was a man standing perfectly still at the bottom of the hill. He was as tall as a cottonwood tree and as skinny as a broomstick. He looked like he was made entirely of the greasy stuff that now covered the countryside.”

Ned Hardy was sure this stranger was the cause of all their troubles. With the go-ahead from the sheriff, the posse advanced, ready to take their shot at capturing him. “But just as they came over the hill, they were frozen in the bright light that suddenly filled the sky” as a little hand scribbled away with red, blue, green, and purple crayons. “And then the light went out.”

For its outright cleverness and superb storytelling, Bad Day at Riverbend is one of my all-time favorite picture books. In his story set in the Old West, Chris Van Allsburg—master of the “what if…?”—has turned a coloring book into a suspenseful who-done-it for young readers. With the twang and tone of a Western movie and detailed line drawings, Van Allsburg empathizes with the coloring book characters, who are mystified by what is being done to them and their surroundings.

As Ned Hardy and his posse happen upon a stick figure drawn into their landscape, readers may begin to suspect who the perpetrator really is. The final pages reveal satisfying “Ah-ha!” moments as a child’s arm and hand appear from the corner wielding a stick of “greasy slime.” The following two-page spread shows a boy or girl wearing a red cowboy hat busy at work and surrounded by art supplies. The last page, on which a closed coloring book lays on a table, answers the question, “what was that bright light?”

Bad Day at Riverbend is the kind of unique story that would capture any child’s imagination and make a wonderful addition to a home library. It would also make a great gift for coloring book enthusiasts.

Find out more about Chris Van Allsburg and his books on his website.

Have a Bad Day Day Activity 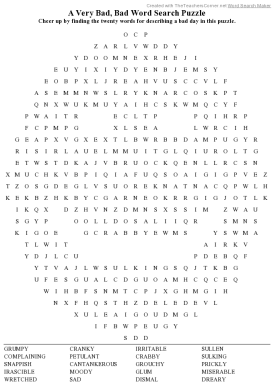 Some days are just bad…bad…bad! They make us feel sad, glum, dreary…Well, you know! Cheer up by finding the twenty words for describing a bad day in this printable A Very Bad, Bad Word Search Puzzle. Here’s the Solution