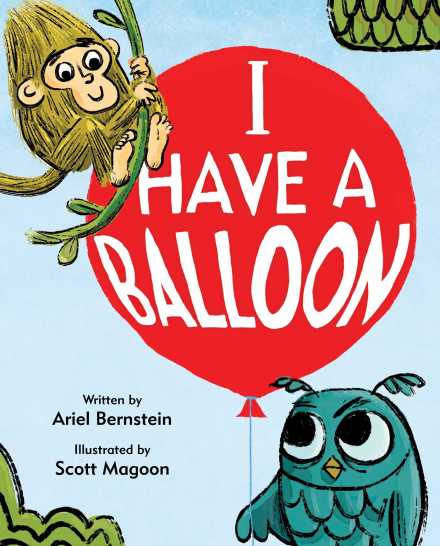 You know you love balloons! Just watching them flutter from mailboxes, bob in the air while tied to a toddler’s wrist, or even float up, up, and away into a blue sky can make you smile. Today’s holiday was established in 2000 by Jeff Brown, who thought these useful and playful favorites deserved a little recognition. Balloons first burst onto the scene in 1783 when Jacques Charles took the first flight in a hydrogen balloon. In 1824 Michael Faraday invented the rubber balloon, and the importance of this discovery cannot be overblown…or…well…you know what happens. To celebrate today’s holiday, why not visit your local party store or grocery store and pick one of the amazing specialty balloons on display—or if you’re a purist, put together a bouquet of colorful traditional balloons.

I Have a Balloon

An owl warily hangs onto his balloon as a monkey swings into the picture pointing at the owl’s prized possession. “I have a balloon,” the owl states. “That is a big balloon,” says the monkey. The owl proudly concurs as he repeats the monkey’s praise. But the monkey is not finished with his compliments. “That is a shiny red balloon,” he says. Yes, the owl agrees.

Perhaps, though, the monkey’s compliments are not entirely gratuitous. He adds that the shiny, red balloon would look swell with his shiny, red bowtie and imagines walking into school with such a perfectly matched outfit. In fact, he says, “The only thing I’ve ever wanted, since right now, is a shiny, big red balloon.” The monkey’s not without some sense of fairness, though, and offers to trade his teddy bear for the balloon. But the owl isn’t feeling it. 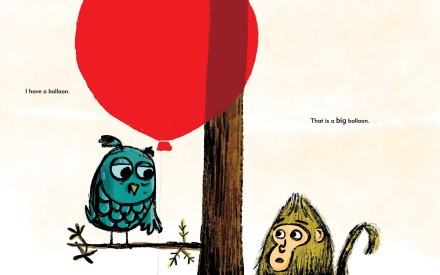 If teddy bears aren’t the owl’s thing, what about a sunflower? The monkey has one of those too, and it’s enormous—even bigger than the balloon! Is the owl interested in trading? No. Would he like “a robot? No.” “A picture of ten balloons? No.” How about a bowling ball and pin? No and No. Finally, the monkey pulls out a sock. Hmmm…the owl seems a bit intrigued. He can see the merits of this sock: it “has a star on it” and “a perfectly shaped hole.” The monkey has to acknowledge these fine qualities.

Is the owl wavering? The balloon doesn’t do anything—but the sock? There are so many things to do with a sock like that. “You can wear a sock on your tail or your foot or your hand or your ear,” and it makes a perfect puppet. Feeling victory in his grasp, the monkey offers the sock in exchange for the balloon, and the owl agrees. The monkey is surprised. You mean the “sock with a star and a perfectly shaped hole?” That’s the one.

Ariel Bernstein’s quick-witted owl and monkey may not end up trading objects, but they sure trade banter—much to the benefit of little readers. In the dynamic dynamics between the capricious monkey and the astute owl, there is much for children to talk and think about. While the monkey lives in the moment, bouncing from one desire to another, the owl plays a longer game, considering each of his options.

When the monkey hits upon the sock after and the owl accepts, kids may well wonder if the owl is using a little reverse psychology to redirect the monkey away from his balloon or whether he really wants that sock. Children might also think about an object’s value when seen through another’s eyes. In the end, both the monkey and the owl seem happy with their objects, raising another talking point on being satisfied with what you have. Bernstein’s funny, mirrored dialog is a joy to read out loud and also allows for various interpretations in tone that could lead to multiple readings and meanings. 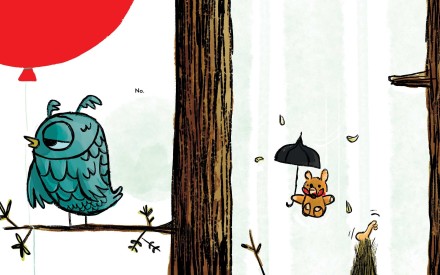 Scott Magoon sets the stage and the characters’ personalities on the first page as the adorable, coconut-shaped monkey swings in on a vine much to the wariness of the tolerant, blue owl. Humorous touches will keep kids giggling (the monkey attends Monkey C. Do elementary school) and provide an arc for this clever story. Children will notice that the branch that breaks in the first pages is bandaged together with the very useful sock later on. Magoon deftly handles the change in fortunes with wry looks, imagination bubbles, and plenty of action.  A little foot that appears on the second-to-last spread provides a bit of foreshadowing to the story’s final laugh.

I Have a Balloon is a terrific read aloud and would be a much-asked-for addition to classroom or public libraries and for any child’s home bookshelf.

You’ll discover more about Ariel Bernstein and her books as well as a Teacher’s Guide on her website!

Balloons Around the World Day Activity This mashup of two favorite activities—volleyball and balloon batting—makes a fun, safe indoor game for parties or playtime. All you need is a balloon, a strip of masking or duct tape and a few enthusiastic players.