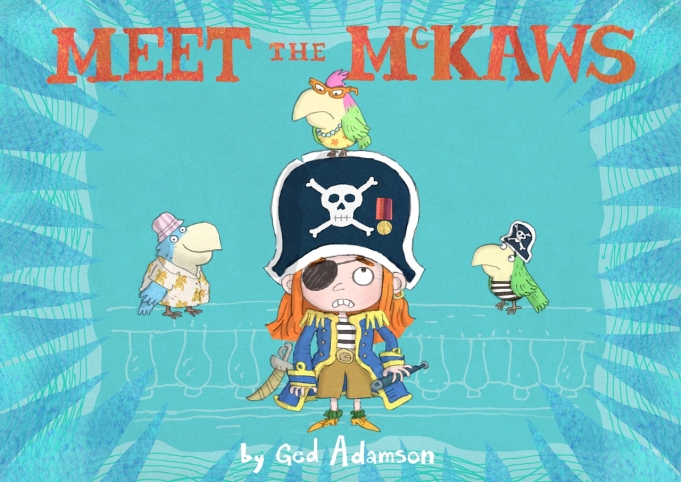 Perhaps these days we should consider making every month Humor Month, but until that happens, enjoy as many laughs as you can during April. No matter what you find funny or how you express your sense of humor, this month’s holiday allows you to indulge the more ridiculous aspects of life!

Captain Stan and Tiny McKaw, Stan’s parrot first mate, love everything about being pirates—“Sailing the seven seas, fighting battles, and searching for treasure! What could be better? Yes, life is pretty perfect for Stan and Tiny” until…Tiny’s parents come to visit. Mr. and Mrs. McKaw aren’t on board 5 minutes before the squawking begins. Mrs. McKaw takes exception to Stan: “‘He doesn’t’ look like much of a captain to me. He’s just a boy!’” And while Mr. McKaw is trying to apologize for his wife’s behavior, he lets out “a huge, disgusting BURP!”

Tiny’s mom is appalled at the state of the ship, calling it “a messy old wreck,” and Tiny’s dad starts in with a long, meandering story of his days as a pirate, complete with a treasure map, a deserted island, the Kraken, sword fights, canon fire, a treasure chest, and even a commendation. I think you get the picture. Problem is…Mr. McKaw never was a pirate.

Maybe a nice sit-down dinner will clear the air and get things started off on the right pegleg again. With a big grin the cook presents the special meal he has prepared in the McKaw’s honor, but after “just one mouthful, both the McKaws were violently sick. ‘Horrible! Horrible!’” cries Mrs. McKaw. The poor cook bursts into tears and runs back to the galley. Perhaps nighttime will bring a little relief. But no, Mr. McKaw snores and Mrs. McKaw nags in her sleep. 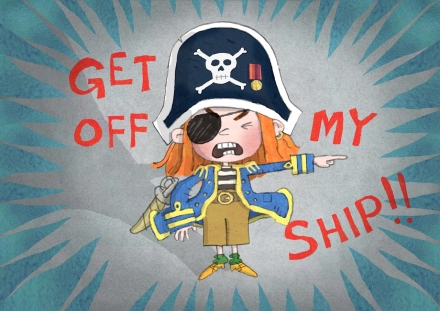 The next morning Captain Stan wakes up to the worst insult of all—guano dots his royal blue pirate coat. Even this offense, though, pales in comparison to what Stan sees next. Perched between his parents sits Tiny in a crisp white shirt and tie with his feathers slicked back. This is the last straw. “GET OFF MY SHIP!!” yells Captain Stan. Mr. and Mrs. McKaw waste no time in flying the coop, but there’s no respite for Captain Stan and Tiny for dead ahead is a colossal storm.

The ship is no match for the lightning, crashing waves, and fierce winds. The cook, the cabin boy, Captain Stan, and the remains of the broken brigand are washed into the roiling sea. “Just when all seems lost, however, Tiny gives a great SQUAWK! ‘It’s Mr. and Mrs. McKaw!’” cries Stan. “‘And my aunts, uncles, cousins…everyone!’” says Tiny. The parrots rescue everyone and fly them safely to nearby Blue Feather Island, which just happens to be Tiny’s home.

All the members of the parrot family help Stan build a new ship, and in the process he gains a new perspective on Mrs. and Mr. McKaw’s personalities. “Mrs. McKaw’s bossiness turned out to be very useful” as she delegates jobs, and Mr. McKaw keeps the crew entertained while they work “just by being Mr. McKaw.” The two are even hungry enough to eat up everything the cook prepares, much to his delight.

With a new ship finally complete, it’s time for the McKaws to take wing. Stan thanks them for all their help and apologizes for throwing them off his ship. On her part, Mrs. McKaw apologizes for being rude and thanks Stan for taking care of Tiny. And what about the new ship? It might be even better than the original with a bold parrot-emblazoned sail and a parrot figurehead pointing the way. As the crew sets sail, Captain Stan acknowledges, “‘You know, Tiny, I’m really glad I met the McKaws.’”

With the dash of a swashbuckler and the true aim of a compass, Ged Adamson depicts the high and low tides of family life in this high seas adventure. His humorous portrayals of personality traits that can drive family members crazy will resonate with kids and adults alike as they laugh through the travails Captain Stan and Tiny suffer during a visit by Tiny’s parents. In a sweet turn of events, though, Adamson reminds us that when storms come—in whatever form—the momentary squalls are forgotten, the anchor of family relationships is dropped, and everyone battens the hatches together.

Adamson’s vivid illustrations of Captain Stan in his sharp pirate garb, colorful (in more ways than one) Mr. and Mrs. McKaw, and the well-fitted wooden ship will delight pirate fans of all ages. Mr. McKaw’s imaginary stories are cleverly portrayed as chalk drawings on a black background, and the sea swirls with cool hues of blue and turquoise. Like Captain Stan, readers will be glad they have a chance to Meet the McKaws and will want them to visit again and again.

Discover more of Ged Adamson’s work on his website!

Meet Ged Adamson and learn about his inspirations, his writing life, and his other books in this funny and insightful Q & A!

Playing board games together can lead to some pretty funny times. Enjoy this printable Avast! Pirate Treasure Board Game! It’s Arrgh-uably the best game on the seven seas!

To use a tea bag to make the map look old:

To Play the Game