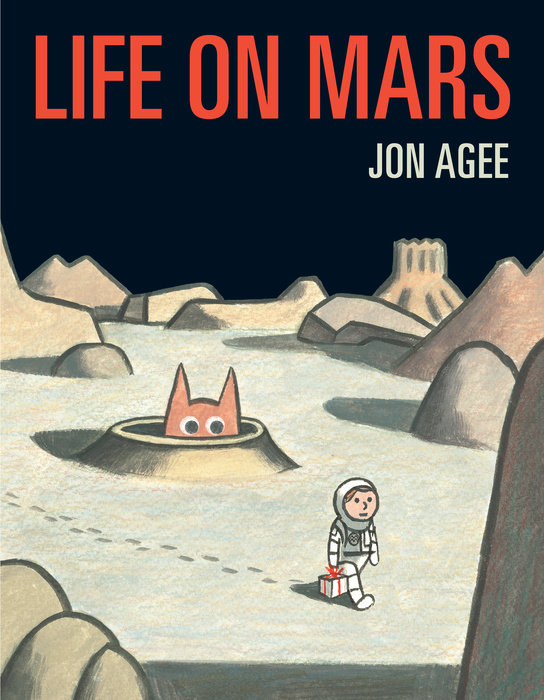 Humor month was established to promote all things funny and to raise awareness of the benefits of laughter and joy. The health benefits of an optimistic outlook are well documented. Lightheartedness also improves communication skills and boosts morale. Reading funny books is a fantastic way to find the humor in life—for kids and adults—and to encourage a love of literature. In fact, there’s even a Funny Literacy Program that can get you started! Click here to learn more and to find a list of funny books to celebrate with. You’ll notice that the Jon Agee—the author of today’s reviewed book—is at the top of the list.

A little boy travels in a rocket all the way to Mars to find life on this mysterious planet. He strolls confidently away from his ship, past craters and mountains, singularly focused on his mission even though he knows that everyone thinks he’s crazy and “nobody believes there is life on Mars.” The boy is so focused, in fact, that he doesn’t notice a head pop up from inside a crater.

As he weaves his way around the planet, the boy decides that Mars is “pretty gloomy,” and begins to doubt that anything could live there. He’s disappointed, too, because he brought chocolate cupcakes, and now it seems he’ll never get to share them. By now the pink creature is is following along behind, completely intrigued.

The boy stops with the Martian only a half step away. I was wrong,” the boy thinks. “Mars is nothing but miles and miles of rocks and dirt! It’s obvious. Nothing could possibly live here!” Disillusioned, the boy drops his bakery box and heads back to his rocket ship, determined to return to Earth. The Martian picks up the box, the size of a chocolate chip in his four-fingered hand.

The boy wanders and wanders, but can’t find his ship. Suddenly, as the Extraterrestrial looks on, the awful truth hits him—he’s lost! “Lost on Mars, where there is no life.” In that moment, though, something catches his eye. High up in the crag of a cliff, the boy spies a yellow flower. He climbs to the top and gazes at his “amazing discovery.” As he picks the flower and turns to go, he sees his cupcake box sitting on a nearby ledge. 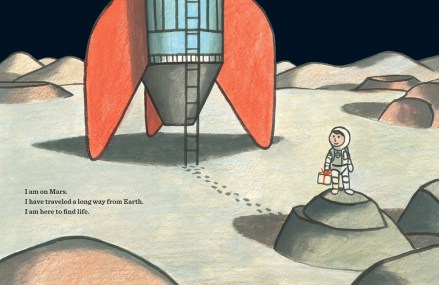 He picks up the box, ignoring the fleeting conundrum of how it got there, and resumes the search for his space ship. He climbs higher onto the cliff, where an even taller rock juts skyward. “I bet I’ll get a good view from the top of that mountain,” he tells himself. He steps up onto the Martian’s backside, and happily locates his ship.

With his flower and box in hand, the boy settles into the rocket. As it roars off into space, he unties the string, thinking that he “deserves a treat” after his adventure. But where did the cupcakes go?!

Jon Agee has such a wonderful way with quiet books in which the humor sneaks up on readers much like the alien in Life on Mars. Kids will love being in on the joke as the little astronaut wanders around the dark, lonely planet unaware that the very thing he seeks is right behind him. His discovery of the yellow flower and the moved cupcake box add suspense, and the final scene of the box full of crumbs is deliciously surprising.

The barren Martian landscape, set against the blackness of space, provides the perfect setting for the simple comic touches that propel the story. The first glimpse of the pink creature’s head in the crater sets the stage for the giggles to come, as single objects lead to the final joke. Readers will feel for the adorable creature as it copies the little astronaut’s expressions, scratches its head in bewilderment, and unwittingly becomes the stepping stone to the resolution of the boy’s search.

Check out more books and illustrations by Jon Agee on his website!

Begin the humorous adventure of Life on Mars in this book trailer!

This alien is enjoying a funny joke, and you’ll enjoy coloring this printable Happy Alien Page!