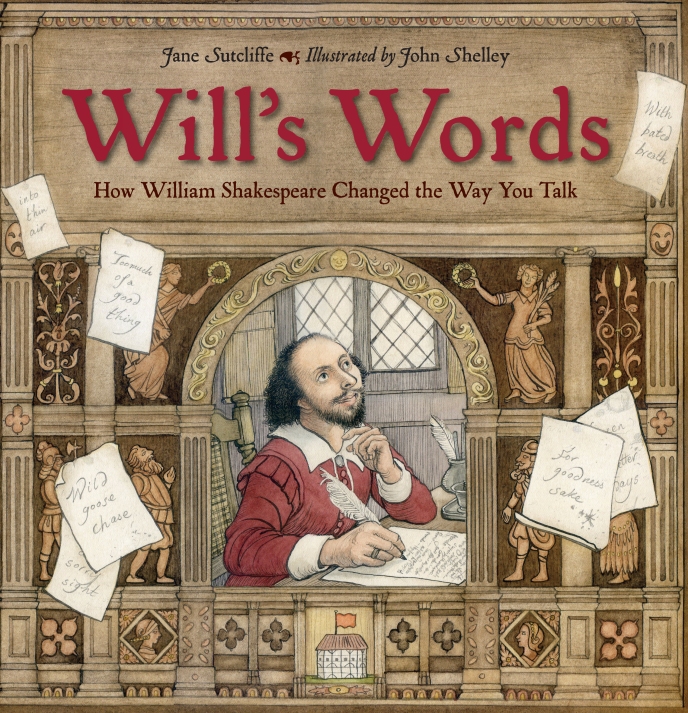 Today we spend some ink to extol the virtues of the fountain pen. Designed in 1636 (a mere 22 years after William Shakespear wrote his last play), the fountain pen sported two clever improvments over the quill pen. First, it contained a reservoir of ink that made frequent dipping in the inkwell unnecessary. Second, it’s metal nib didn’t require cutting the way a feather did to retain sharpness. While there are now many alternatives to fountain pens, there are those who prefer its smooth elegant lines for writing everything from notes to novels. Fountain pens are also collectable, and craftsmen around the world create beautiful, innovative works of art on these functional canvases.

Will’s Words: How William Shakespeare Changed the Way You Talk

“In 1606 London was a bustling, jostling, clanging, singing, stinking, head-chopping, pickpocketing wonder of a city.” With that phenomenal sentence Jane Sutcliffe begins this fascinating and ingenious look at the Globe Theatre and the experience of attending a play in William Shakespeare’s time.

In addition to all the qualities of London mentioned above, the town was also a “play-going city.” Every day of the week except Sunday, a play—or maybe even two or three—was performed, and as many as 18,000 people attended plays every week! They just couldn’t get too much of a good thing!*” And everyone loved the plays written by William Shakespeare! 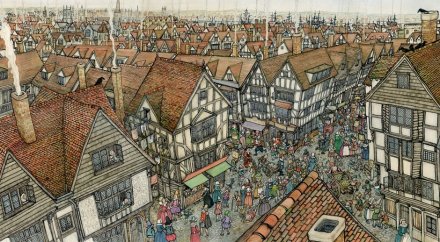 How did a day at the theater begin? Well, at 1:00 a banner was raised from the roof of the playhouse, and men, women, and children streamed through the streets toward the Globe. It cost a penny to get in, but if you paid more you got a chair, and if you paid a little more than that you were seated in the Lord’s Rooms. The Lord’s Rooms were actually for fashionable people who wanted to be seen but didn’t really care what play they were seeing.

All the actors were…well…actors. There were no actresses in those days. Men played women’s parts as well as men’s. And if you think phones and talking are problematic in today’s theaters, you would have been aghast at the audiences back then! They were not well behaved at all!

There were plays to please all tastes—comedies, tragedies, histories, and romances—all full of complicated plots and plenty of twists and turns. While the stories may have been intricate, the sets were not. But the bare-bones sets were made up for in gorgeous costumes and even some special effects accomplished through trap doors and ceiling holes. Sounds full of amazement, right? Good thing too because these plays could go on for hours, and most people stood through the whole thing, rain or shine! 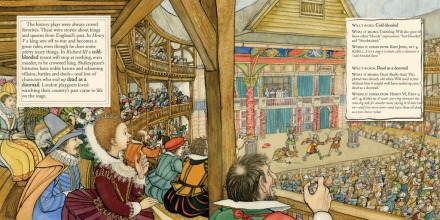 William Shakespeare’s plays ended when the last line was spoken, his influence continued. Theatre-goers repeated the lines they’d heard long after they left the Globe. They used Will’s words so much that his new phrases became part of the common language, and we still use them today!

Jane Sutcliffe inserts a tongue-in-cheek apology before the main text, explaining how she wanted to tell the world about the Globe Theatre in her own words, but that William Shakespeare’s words kept getting in the way. Yes, using another writer’s words is a no-no—but if they’re Shakespeare’s words? Words we use every day? Hmmm… Sutcliffe’s lively history of the Globe Theatre and Old London’s theater culture is conversational, humorous, and highly informative.

The left-hand page tells the story of the Globe with phrases and words coined by William Shakespeare sprinkled throughout and set in bold type. On the right-hand page readers learn the meaning of those words and phrases (some have changed a bit since Will’s time) and which play they come from. A final note from Sutcliffe at the end of the book reveals a bit more about the playwright. A timeline of Shakespeare’s life and a bibliography are also included.

John Shelley’s incredible illustrations of London and the Globe Theatre will take your breath away. The streets teem with vendors, knights, shoppers, kids, Ladies, and Lords. If you look closely at the intricate paintings you’ll also spy the seamier side of Old London—a pickpocket, a criminal in the stocks, a tavern brawl, a cat snatching a free meal, a woman about to empty a chamber pot on her unsuspecting downstairs neighbor’s head, and…could that be a dead rat?— and that’s only on the first page!!

Subsequent pages show the waterfront with its sailing vessels, a peek into Shakespeare’s study and a look at the printing press, an aerial view of London, the Globe Theatre with its thatched awning, actors donning wigs and costumes, the audiences enjoying the plays and the fun of a day out. Each illustration is alive with color and movement, texture and design, expressive faces, and all the sights, sounds, and aspects of Old London. Kids will love lingering over each page picking out the funny events going on in the lanes, in the theater seats, and on stage.

So hurry to get your own copy of Will’s Words and enjoy it to your heart’s content! You will definitely get your money’s worth!

*Italicized words and phrases were invented by William Shakespeare

To learn more about Jane Sutfcliffe and her other picture books and books for early and middle grade readers visit her website!

View a portfolio of picture book illustration and other work by John Shelley on his website!

William Shakespeare might have missed out on the new technology of fountain pens, but he sure did a great job with the quills of the day. Try your hand at making a quill pen—you may not be able to write with it, but it sure will look cool on your desk! 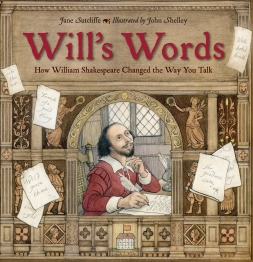 You can find Will’s Words at these booksellers