Being “in the dog house” means that somehow you’ve upset someone, made them mad or in some other way fallen out of favor with them. Maybe you owe them an apology or at least an explanation. Today’s holiday gives people a chance to say “I’m sorry” and patch up any hurt feelings. Like the bear in today’s book, you may find yourself out of the doghouse and on the path to better friendships!

The Bear Who Stared

Bear loves to stare…and stare…and stare. One morning he emerges from his den to find a family of ladybugs having a picnic breakfast. He can’t help but gaze at them intently. “‘What are you staring at?’” the daddy ladybug demands before he and his family pack up to find a more private leaf. Bear continues on his way. In a bit he climbs a tree and stares at a bird feeding her chicks. “‘Can I help you?’” the mother bird asks, but Bear remains silent. The chicks don’t like Bear interfering with their meal, so the mother bird angrily tells him to “‘sshhhooooo!’” 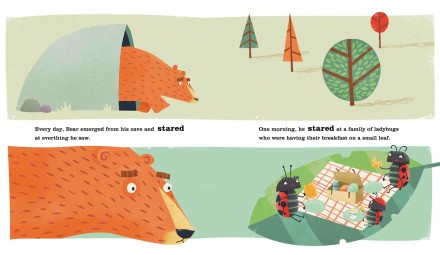 At the bottom of the tree Bear spies a badger hole and sticks his head inside. The badger, particularly irritated at Bear’s badgering stare while he is shaving, bites poor bear on the nose. Sore and dejected, Bear wanders through the forest to a large pond. He sits down on a log to ponder his situation. He doesn’t mean to be annoying, he’s “just curious but too shy to say anything.”

A little frog floating on a lily pad in the middle of the pond pipes up, “‘I’ve seen that look before.’” Bear stares at the frog and the frog stares back. “‘Not much fun being stared at, is it?’” he says. Bear confesses that he just doesn’t know what to say to anyone. Just then Bear catches a glimpse of another bear staring back at him from the mossy water of the pond. This bear looks exactly like Bear, except that he is green and wavy. Suddenly, the green bear smiles. “‘You see?’” says the frog. “‘Sometimes a smile is all you need.’” The frog dives off his lily pad into the pond, and the green bear disappears too.

The next day Bear leaves his den and discovers the ladybug family breakfasting again. As soon as they spot Bear, they begin to gather their things. “‘Hello!’” Bear says with a big smile on his face. The ladybugs are surprised and happy. “‘Oh, hello!’” replies the dad, smiling back. With renewed confidence Bear wanders into the forest. He smiles at the birds and smiles at the badger, and they smile at him in return. Bear makes a lot of new friends that day. And there’s even that friend down at the pond who likes to stare as much as he does!

Duncan Beedie highlights the awkward feeling many kids—and even adults—often feel in social situations. Nothing pops immediately to mind to say and yet there’s a desire for connection. As Bear discovers, staring is not the answer—so what is? In The Bear Who Stared Beedie offers a simple, but universal solution through an engaging and humorous story. Bear, sporting a bemused expression that aptly depicts his predicament, is such an endearing character that readers will wish they could give him a hug as he suffers slights from the woodland creatures.

The full-bleed, oversized pages put readers at eye level with bear and his subjects, and the very up-close look into Bear’s staring eyes will make kids laugh. The green, rust, and blue palette on matte paper is bold, but muted, giving the pages an organic, environmental feel that is perfect to carry the story.

The Bear Who Stared is a funny story time read with a heart that kids will ask for again and again.

Check out more of Duncan Beedie’s illustration and animation work on his website!

Get Out of the Doghouse Day Activity 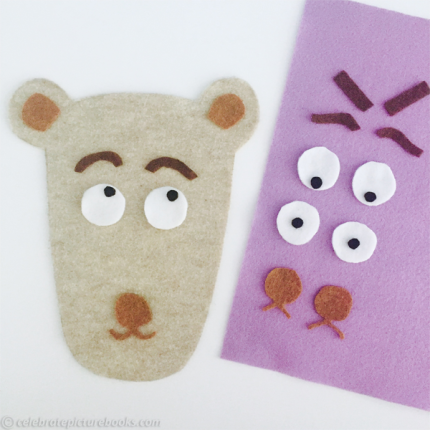 Sometimes it’s hard to manage or even recognize various emotions that land you in the doghouse. With this easy-to-make felt (or paper) set, you can try out different emotions and talk about them, make up stories to go with each facial expression, or play a fun game. Below, you’ll find a couple of ideas!

Or: Color and play with the paper set

To Play a Game

Roll the die to collect parts of the bear’s face. The first player to create a full face is the winner.

For a Fun Story Time

Give the bear different faces and make up stories of why he looks that way!