Today’s holiday celebrates those undergarments that make our outerwear look and feel better and that make kids of a certain age giggle with delight. Established in 2003 by Freshpair, the leading online retailer of underwear for men and women, the day promotes a feeling of confidence in your wardrobe from the foundations out. Of course, kids are just concerned with having a bit of fun, especially if it includes wearing their underwear on their head—as you’ll see in today’s book!

Ah! There’s a “bare bear” ready to depart the bathroom after a bath, but his dad says, “‘Stop right there! You should be wearing underwear!!!’” The precocious tyke and future linguist puts on an innocent face and asks, “‘Under where?’” He banters with his dad about all the places his underwear might be until his dad points directly to them and gives his son a verbal map: “‘Right there! / On the chair, / there’s a pair / of underwear!!!’”

There may be a valid reason the little bear doesn’t want to don his underwear as there’s a “‘big tear.’” Luckily, there’s also a “‘spare.’” Now that the little bear has a good pair of underwear, he’s suddenly forgotten “‘where to wear this underwear.’” And so he starts his fashion show, demonstrating that a simple pair of whitey tighties can double as a vest, a leotard, and several good ways to hide. Then this clever bear proves that any hair salon would be proud to offer the historical, retro, and cool styles he’s brushed up on with a cottony twist.

With his underwear at the ready, the bear also becomes two superheroes before his dad intervenes again with: “‘What the heck’s goin’ on in there?!’” Oh no! Little Bear has to hide from the flooded mess he’s made. He turns out the light, dives in the tub, and waits…. A scare for dad and a thorough soaking for both later, the little bear reaches for a “‘dry new pair’” under his father’s watchful eye.

Dry and dressed, the young bear is ready for bedtime story time. After a tell-tale yawn, Dad carries his son carefully to bed. But is his little one really asleep or is he about to start this rhyming game all over again?

With twenty different rhymes for “underwear” Jenn Harney ingeniously weaves a story that’s positively hilarious. The little bear’s exuberant play is infectious and silliness at its best and will have both children and adults laughing out loud. The pitch-perfect banter between father and son during this raucous bath time as well as the fast-paced rhythm makes this book a delight to read aloud.

As the little bare bear splashes through a puddle left over from his bath, Harney demonstrates that she knows what bath time is really all about for kids. Hanging from the chair’s seat, the necessary underwear is in full view of readers, inviting them to join in as the little bear jokes with his dad. His clever clothing, super heroes, and hair styles (a multilayer bouffant is creatively held together with two toothbrushes and decorated with his rubber ducky) will no doubt encourage fun—and funny—imitations. The characters’ spot-on facial expressions add plenty of comic depth to the story while also revealing the loving relationship between the two.

Underwear! will be a favorite, often-asked-for addition to home and library bookshelves. The book’s agile use of rhyme and rhythm make it a joyful book for classroom story times and writing and reading lessons as well.

To learn more about Jenn Harney, her books, and her art, visit her website.

These socks had fun tumbling and turning in the drier, but they were each separated from their twin! Can you find the matching pairs in this printable Sock Tumble Matching Game? 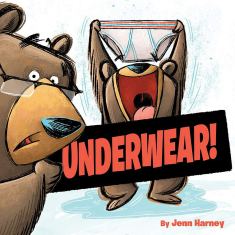 You can find Underwear! at these booksellers