Plant the Seeds of Greatness Month was established to help people remove barriers to their success and make changes to better their lives. Whether you want to learn a new skill, take care of your health, meet new people, or pursue a job or profession you’ve always dreamed of, this month is a perfect time to get started!

Who Says Women Can’t be Doctors? The Story of Elizabeth Blackwell

Once upon a time there were no women doctors. Women weren’t even allowed to be doctors. Sounds like a fairy tale, doesn’t it? But it was the truth. Then Elizabeth Blackwell, came along. Elizabeth was not like other girls of the 1830s. She loved to explore and take on challenges. She could lift her brother over her head, and to toughen herself up she slept on the hard wood floor. To get a better look at the world she once climbed to the roof of her house and leaned waaaaay out with a spyglass. What did she see? Maybe she saw her future. But it wasn’t what she imagined at the time. Blood made her queasy, dissection was disgusting, and being sick just made her want to hide from all the fussing. 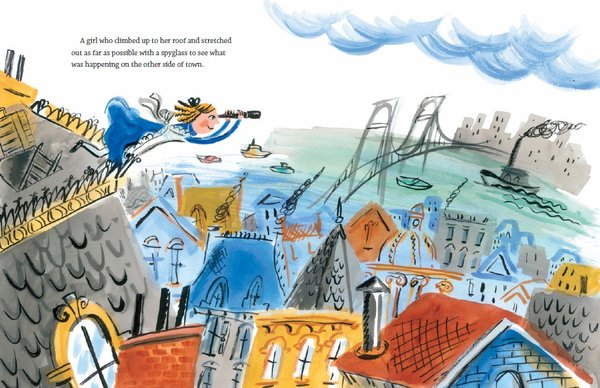 A comment by a sick friend, however, puts a bee in Elizabeth’s bonnet. Mary Donaldson tells Elizabeth that she would much rather have been examined by a woman than her male doctor, and then says, “You should be a doctor, Elizabeth.” What a crazy notion, right? Well… Elizabeth can’t stop thinking about it. She asks around. Some people think it’s a good idea, but impossible; others simply think it’s impossible. They believe women aren’t strong enough or smart enough and they laugh at her. By this time, though, Elizabeth is determined.

She applies to 28 medical schools, and they all say, “No.” But one day a “Yes” arrives in the mail. Elizabeth packs her bags. As she nears the school, Elizabeth sees that the townspeople have all come out to see her. They aren’t there to welcome their new medical student, though; they just want to whisper and point and stare. Surely, Elizabeth thinks, her classmates will be happy to see her.

But she receives the same reception on the college campus. In fact, she learns that the only reason she was accepted was because the men voted to let her in as a joke! Elizabeth knows how to handle it. She studies hard and gives her opinions, and soon she wins the respect of her fellow students—even if the townspeople still don’t accept her.

On January 23, 1849 Elizabeth Blackwell graduates from medical school with the highest grades in the class. She has become the first woman doctor in America! Many people hope that she will be the last. But as we know…she was Not! 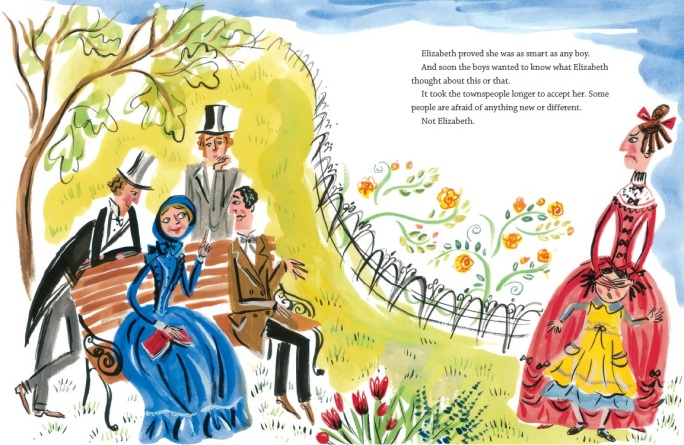 Tanya Lee Stone magnificently imbues this short biography of Elizabeth Blackwell with enough mystery, conflict, and history for even the youngest readers to understand the type of girl and woman Elizabeth was as well as the challenges she faced. Stone has deftly included details of Blackwell’s life that  make her instantly recognizable and relatable to children. This biography is not only historical nonfiction, but a universal story for all generations. Blackwell may have started out as a reluctant dreamer, but once she dared to believe she accomplished more than she or anyone could have imagined. It is what we want for all our children.

Marjorie Priceman’s illustrations that swirl with words, are angled on the page, and float in white space are as topsy-turvy as the world Elizabeth Blackwell created with her courage and life’s work. Blackwell’s boldness is echoed in the rich colors and strong lines of Priceman’s gouache and India-ink paintings, and the emotions she stirred in others—from derision to horror to admiration—are cleverly and exceptionally drawn in a minimal style on the characters’ faces.

Learn more about Tanya Lee Stone and her work—both fiction and nonfiction—for children and teens on her website!

Elizabeth Blackwell believed in herself and became the doctor she wanted to be. With this craft you can make a doctor figure or color your own clothes to make your figure any profession you are dreaming of! 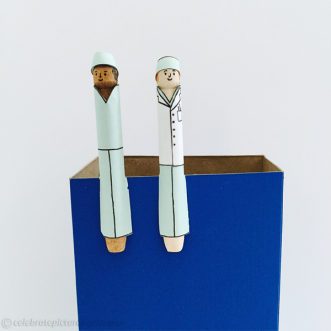