National Aviation History Month and is dedicated to exploring, recognizing and celebrating America’s great contributions and achievements in the development of aviation. Human-powered flight has come a long way from its earliest roots in kites and gliders. Hot-air balloons and biplanes gave way long ago to more and more sophisticated airplanes, jets, and rockets that blast into space. To celebrate the month, visit a local museum or read up on some of the pioneers of early flight—like the courageous woman in today’s book.

Entertained crowds knew Ruth Law for the loops, the spiral dives, and even the dip of death that she performed in her airshow. But for Ruth these stunts were like standing still. She “longed to fly to get somewhere…somewhere far away.” She decided to make a trip from Chicago to New York City. There weren’t too many aviators brave enough to attempt such a long flight in the type of biplane Ruth flew. They feared that if something went wrong with the engine, they’d never realize it in time to land. But Ruth knew her plane inside and out and figured she “could anticipate what would happen to the motor by the sound of it.”

A trip like the one Ruth envisioned posed another problem, though. Her small biplane held only 16 gallons of gasoline—not enough to make the journey. She asked Glenn Curtis, who built her plane, if she could buy his latest model. This much bigger plane held 205 gallons of gas and had already proven itself for long-distance flight. But Curtis refused. He didn’t believe Ruth could handle the “powerful machine on such a long flight.” 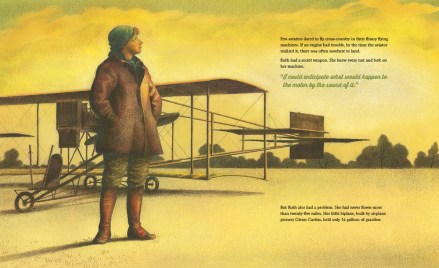 Ruth was not to be deterred. She added three more gas tanks to her plane so that it could hold 53 gallons, installed a cover to protect her legs, and created a scrolling map of the route. Aviation experts said she would fail, but Ruth disagreed. “‘What those men can do a woman can do. I can do,’” she said. On a windy November 19, 1916, Ruth took to the cockpit to begin her nonstop flight. Although she was a little afraid of what lay ahead, she took off, believing that “the scare is part of the thrill” of any experience.

Ruth had counted on the strong wind to help push her farther faster, but just as quickly as it had blown up, the wind stopped. Ruth wondered if she would have enough gasoline after all. Flying over one landmark after another, Ruth felt exhilarated. As she passed over Cleveland, Ohio, though, “the oil gauge registered zero pressure. Something was wrong!” The sounds of her plane’s motors told Ruth a different story. She kept flying.

Soon she was passing over Erie, Pennsylvania—the site of the record-breaking flight by Victor Carlstrom. Even the icy stings of the frigid air couldn’t diminish her excitement. In a moment she was east of Erie and had broken Carlstrom’s record. The thrill of her achievement was tempered, however, by the sputtering of her engine. While there was still a little gas in the plane, it was “too low to feed into the engine.” Ruth tipped the plane forward to give it more gas. Two miles from Hornell, New York, the nearest landing spot, “the engine grumbled its last roar, leaving her with nothing but the silence of the wind.”

Ruth steered the plane as it glided into Hornell—512 miles from Chicago. She was the new American nonstop flight record holder. Ruth’s original plan had been to fly to New York City, so after refueling and grabbing a bite to eat, she took off once again. Weighed down by the full gas tank, the plane barely made it over a hill and tall trees in her path. This was as close to crashing as Ruth ever came—or ever wanted to be.

People along the route had already heard about Ruth Law, and they came out to watch and wave. With darkness closing in, Ruth decided that she would have to land short of New York City. She touched down in Binghamton, New York and took up the rest of the flight the next morning. As a thick blanket of fog obscured her view, Ruth flew lower and lower to get her bearings. When she finally spied the tip of Manhattan, she glided in and “circled around the Statue of Liberty toward Governor’s Island.” Of Lady Liberty, Ruth said, “‘She smiled at me when I went past. She did!…I think we both feel alike about things.’”

Cheered by a celebratory crowd and brass band, Ruth landed on the welcoming earth. Despite the icicles that hung from her hair and the numbing cold, Ruth smiled and waved. She realized then that not only had she broken an aviation record, she had made a point for all women. She later put her thoughts into words: “The sky was my limit and the horizon my sphere. It’s any woman’s sphere if she has nerve and courage and faith in herself.”

An Author’s Note about Ruth Law and her life, complete with photographs, follows the text.

Heather Lang’s thrilling account of Ruth Law’s record-breaking flight from Chicago to New York will have young aviators on the edge of their seat. Law’s flight was filled with suspense from its inception as an idea in a young woman’s mind to its final touchdown, and Lang deftly incorporates the facts as well as Law’s feelings into her well-rounded story. Along the way, readers learn about Ruth and also about early aviation. Ruth Law’s own words, included throughout the story, will inspire children as they see that even though she lived long ago, her thoughts and ideas still ring true today.

Young readers will be fascinated by Raúl Colón’s glowing illustrations of Ruth Law and her flying machine. His detailed drawings of Law’s biplane give children an excellent view of the open-air craft, fostering a true understanding of the courage it took for her to undertake such a flight. Images from Law’s viewpoint in the cockpit allow readers to vicariously travel her path to self-realization and a record-breaking flight.

Check out Heather Lang’s website for more about her and her books. You’ll also find links to a video and photos about Ruth Law, a map of her route, and information about her plane as well as a Teacher’s Guide.

Fly along with Ruth in this Fearless Flyer book trailer!

Head in the Clouds Biplane

If you love airplanes and flying, you’ll have fun making your own plane from recycled materials! Use your creativity to decorate your plane while you imagine yourself flying through the clouds on a beautiful day. Younger children will have fun sharing this activity with an adult or older sibling too!

To assemble the biplane

To assemble the front wheels

To make the back wheel