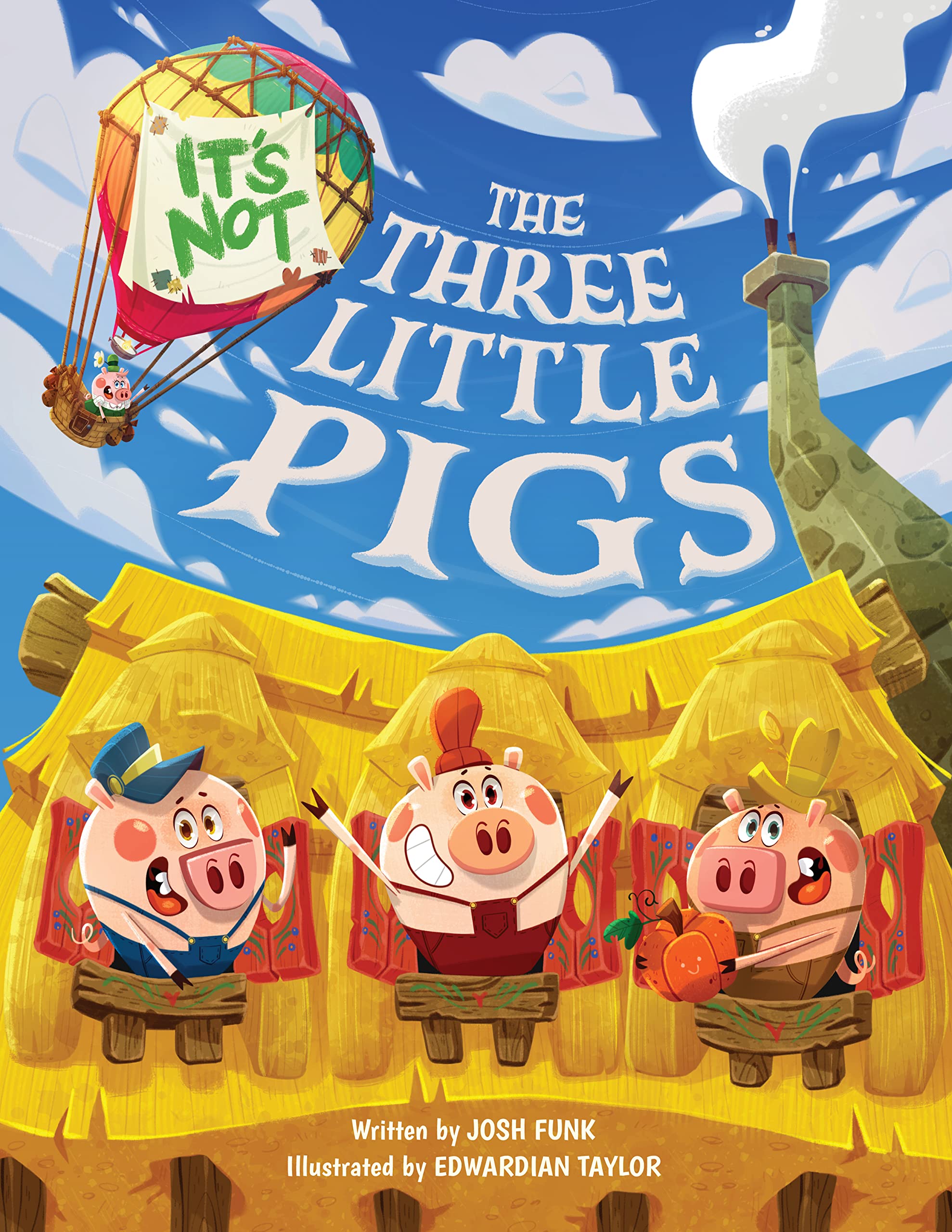 I’m excited to be a stop on the book tour for Josh Funk and Edwardian Taylor’s latest, It’s Not the Three Little Pigs. November is the perfect time to celebrate this fourth book in the It’s Not a Fairy Tale series as this month we celebrate Picture Book Month, Family Stories Month, and Family Literacy Month. And today is National Author’s Day, a day that one character in today’s book will definitely be interested in! You’ll see!

Thanks to Two Lions and Barbara Fisch at Blue Slip Media for sharing a copy of It’s Not the Three Little Pigs with me for review consideration. All opinions about the book are my own.

It’s Not the Three Little Pigs

“Once upon a time, a little pig family lived in a little pig house.” You know how this story goes, right? And even though one of the pigs objects to being called “little,” it still has their mom sending her three sons “out into the world to seek their fortune.” Sure, the young pigs don’t know what this means, but the roving, and apparently insightful, narrator explains the realities of life – that they need to find their own place to live and get a job. It seems these three aren’t entirely clueless, though, as Alan wants to be a builder, Alfred has his sights set on winning an Oscar, and Alvin… well, two out of three isn’t bad… dreams of being a pumpkin.

Wait! Alan, Alfred, and Alvin have a sister?! (Who knew?) And she wants to be a storyteller. The narrator is surprised to meet this interloper, but offers to let her tag along. Alison is an enterprising pig and jumps at the chance to help tell the story. And so she begins: “It was a dark and stormy night. The three intrepid pigs began their quest to the magical land of—”

But the narrator, the real storyteller here, rejects this version of events and sets Alison straight: she can add bits here and there, but she can’t tell the whole story. So the pigs go their separate ways, and … finally … we’ve come to the part you know, where the first little pig builds a house of straw. But what do you think of these days when you hear the word “straw?’ Yeah, that’s what Alan thought too, so he designed a beautiful, sturdy cottage from plastic drinking straws he found littering the environment.

The narrator wants to stick to the original story, though, and builds the haystack straw house himself—even, as Alan points out it “isn’t structurally sound at” and “there’s no bathroom.” He finishes it just a moment before the wolf comes knocking at his door with the familiar “Little pig, little pig, let me come in.” Unsuspecting Alan’s ready to invite him in until the narrator warns him about the wolf’s true intentions and tells him he’s supposed to say “Not by the hair of my chinny chin chin.” Alison finds this rejoinder completely ridiculous, and by the time she’s done schooling Alan on the reasons, the wolf has disappeared. 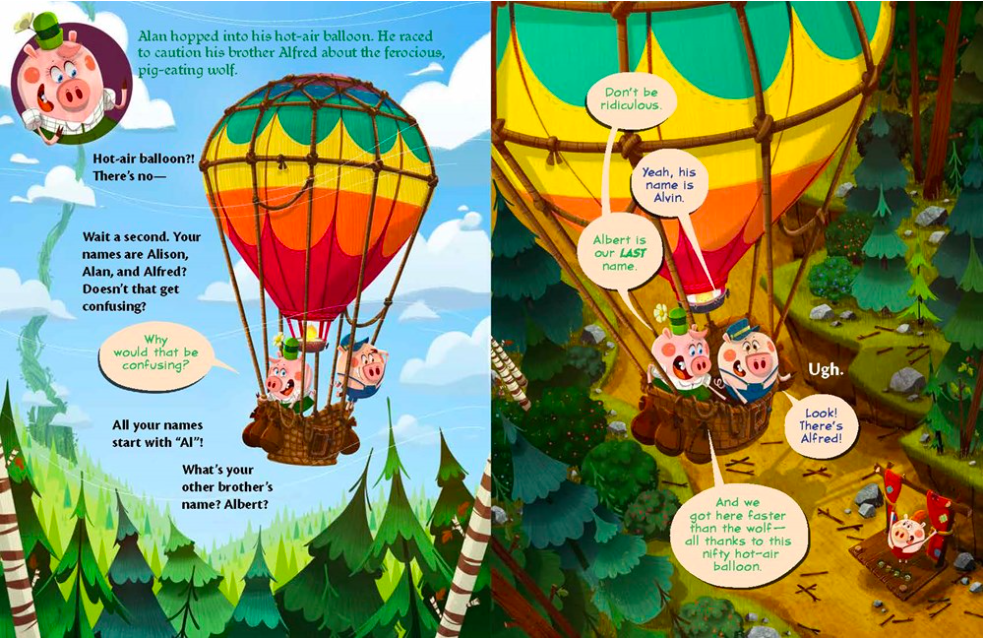 Hearing that the wolf is no doubt on his way to Alfred’s house, Alan and Alison hop into a hot-air balloon and take off. They find Alfred on a stage made of sticks, singing, dancing, and acting. Seems a stage is as far as his building inclinations will take him, so Alan gets to work again, and, before the wolf even appears on the road, he’s constructed a topnotch cabin. When the wolf does come nosing around, Alfred, the consummate professional actor, follows the script and says the “chinny chin chin” line, but he can’t figure out how the wolf is going to blow the house down without magic or fairies or anything this fairytale is supposed to have. In fact, Alison finds this whole story boring and repetitive and without any kind of coherent lesson.

But now it’s time to rush off again to save Alvin, who they find living next door to Cinderella’s castle in a pumpkin house, magicked into existence by Cindy’s fairy godmother. At last, the wolf catches up to them. But who wins out in the end: the retro-loving narrator? Alison and her quest for magic and fairies? Or readers who get to ham it up with some very familiar friends?

In a welcome return to fairytale land, Josh Funk brings mayhem and a modern touch to the traditional The Three Little Pigs by adding a welcome fourth little pig who updates the story while pointing out the nonsensical silliness of the original with opinionated asides and giddy improvements that will have kids huffing and puffing with laughter. Funk’s freewheeling imagination conjures up an alternative countryside universe full of fun gadgets that move he story along at jetpack speed. Snappy dialogue full of wit and personality make It’s Not the Three Little Pigs a rollicking read aloud, and older kids may enjoy taking Alfred’s lead and turning the whole tale into a play. As with the other stories in the series, Funk ends his fable embracing friendship, cooperation, and just plain magical fun.

Edwardian Taylor imbues Alan, Alfred, and Alvin with just the right mix of cluelessness and competency to bring out all the comedy in Funk’s writing, while Alison exhibits enough confidence for all of them. Kids will love giggling and poring over Alan’s blueprints for his house designs, which Taylor has loaded with puns, hilarious comments on the materials used, and references to other fairytales. Small details add even more humor and interest to the vibrant, action-packed pages, and dialogue color-coded to each character’s outfit makes it easy for readers to follow who’s saying what. Fans of the It’s Not a Fairy Tale series know that a true showstopper awaits them on the final spread, and here, as the stars twinkle, kids will be hooked on picking out old friends who have come to celebrate these four little pigs.

Whether your child is a fan of the It’s Not a Fairy Tale series or just discovering it, It’s Not the Three Little Pigs is a hilarious fractured fairy and parody that both kids and adults will want on their home bookshelves and is a must addition to school and public library collections. The book would also be a hit for writing workshops as well as lessons on fairytales and analyzing and comparing literature.

Like the characters in his books, Josh Funk doesn’t like being told how stories should go―so he writes his own. He is the author of a bunch of picture books, including My Pet Feet, illustrated by Billy Yong; the popular Lady Pancake & Sir French Toast series, illustrated by Brendan Kearney; How to Code a Sandcastle, illustrated by Sara Palacios; and Lost in the Library: A Story of Patience & Fortitude, illustrated by Stevie Lewis. He lives in New England with his wife and children. Learn more about him at www.joshfunkbooks.com and follow him on Facebook:  Josh Funk Books | Instagram: @joshfunkbooks | Twitter: @joshfunkbooks.

Edwardian Taylor is the illustrator of multiple children’s books, including Hey, You’re Not Santa!, written by Ethan T. Berlin; Goldibooks and the Wee Bear, written by Troy Wilson; the Toy Academy chapter books, written by Brian Lynch; and the It’s Not a Fairy Tale books, written by Josh Funk, among other titles. He lives in Texas with his partner and their three dogs. Learn more about him at www.edwardiantaylor.com and follow him on Tumblr, Instagram, and Twitter @edwardiantaylor. Ham it up with your own pig and piglets that are easy to make with this fun craft!