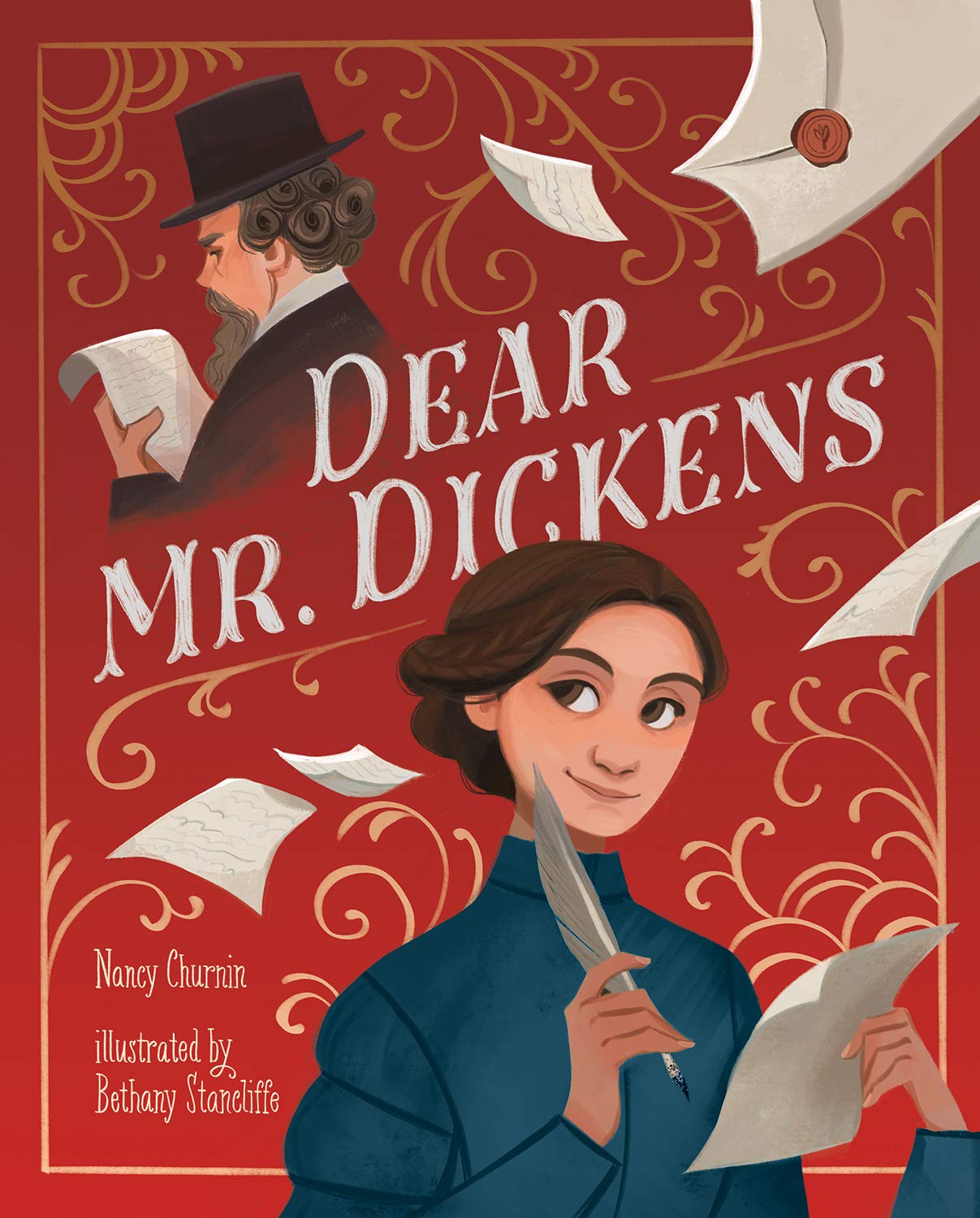 Many young wishers know all about writing letters in December, so it should come as no surprise that a letter-writing day be included in this month’s calendar. Today’s holiday celebrates all forms of personal communication written by hand and remembers correspondences from the past that have given us such insight into our favorite poets, novelists, historical figures, and more. Sure, email might be faster, but there’s a certain luxury in taking the time to write your thoughts on paper as well as an palpable excitement in holding a heartfelt letter in your hands. Today’s book also reminds us that letters can often change minds, hearts, and actions.

Like most people at the time, Eliza Davis looked forward to every new story Charles Dickens published in his weekly magazine, All the Year Round. And when he began publishing books, she eagerly read those too. “What made Charles Dickens a hero in Eliza’s eyes is that he used the power of his pen to help others.” After people read about the harsh conditions children faced at workhouses, they demanded change. And when they “were moved to tears by tales of families struggling in desperate, dirty conditions, they gave what they could to charities. As did Eliza.”

But while reading Oliver Twist, there was one aspect of the story that distressed Eliza. As a follower of the Jewish faith, she was disturbed by Dickens’ portrayal of Fagin as an “‘old shriveled Jew'” who taught Oliver how to steal. Fagin was “described…as dishonest, selfish, cruel, and ugly.” And each time she read “the Jew,…the word hurt like a hammer on Eliza’s heart.” Prejudice against Jews in England was already bad, and Eliza felt Dickens’ stories would made conditions worse. 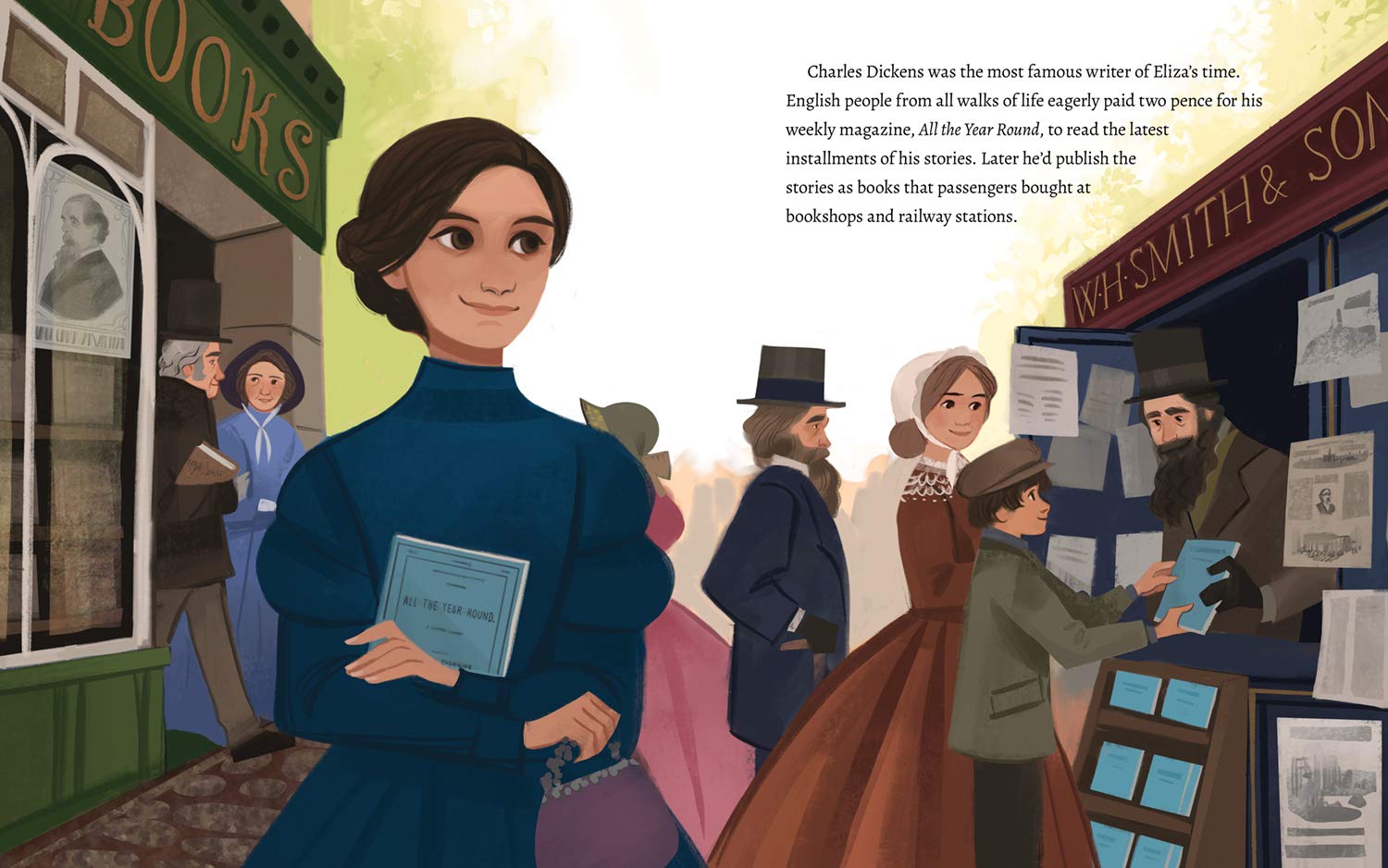 She decided to write a letter to Charles Dickens, but she worried about his reaction. In her letter she said that his “portrayal of Fagin encouraged ‘a vile prejudice.’ She asked him to ‘atone for a great wrong.'” As she posted her letter, she wondered if she would get a response. About two weeks later, Eliza did receive an answer to her letter. In it Dickens replied that Fagin was based on real criminals and that there there were “other bad people in the book who are not Jewish.” He took exception to her request to atone by saying that “any Jewish people who thought him unfair or unkind…were not ‘sensible’ or ‘just’ or ‘good tempered.'”

This time Eliza did not receive an answer. She knew that Dickens was working on a new novel, and when it began to appear serialized in monthly installments, she hurried to buy them, wondering if there would be other Jewish characters and how they would be depicted. When, as she read Our Mutual Friend, she realized Dickens had included another Jewish character, she trembled, wondering what they would be like. 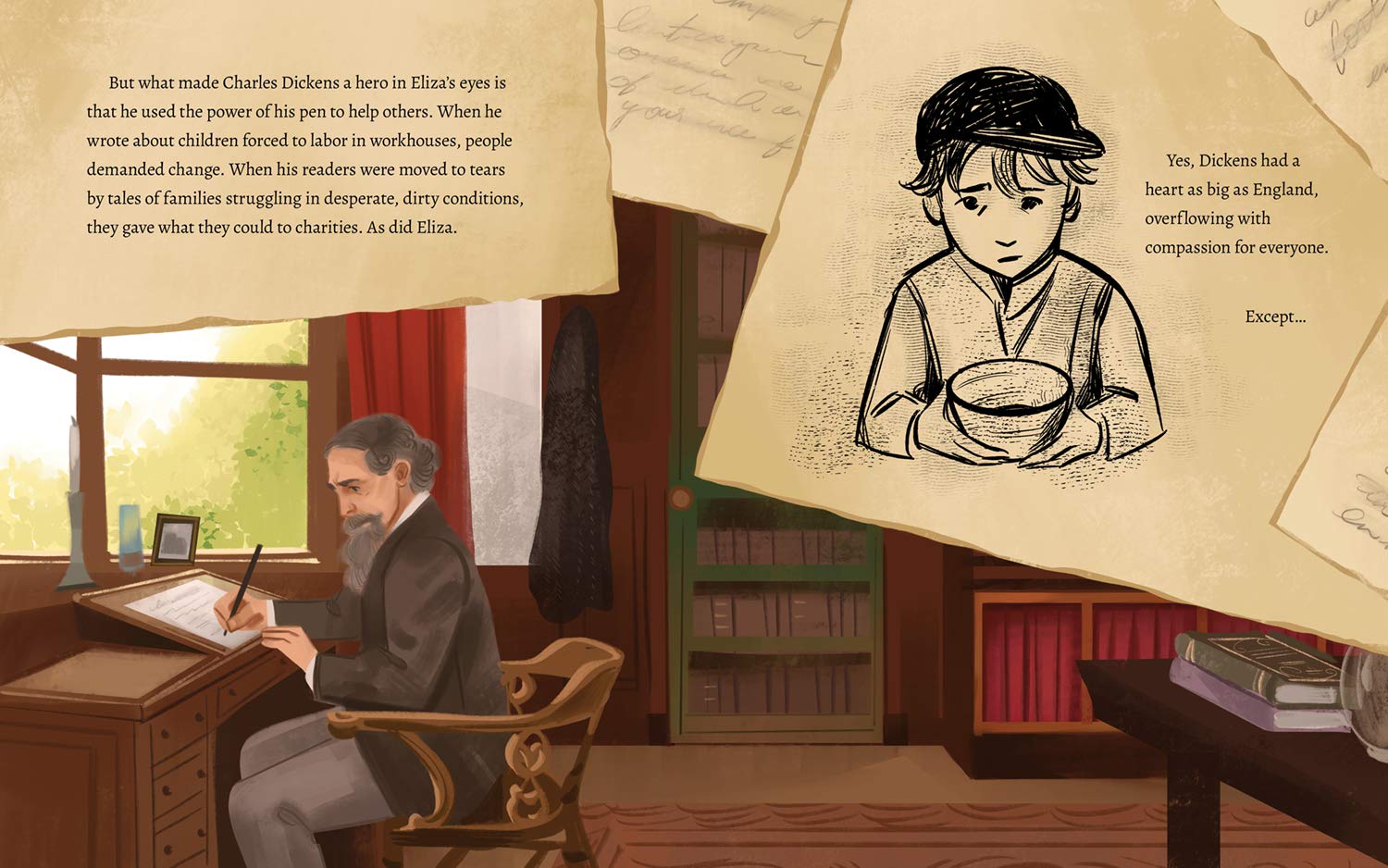 Eliza was elated to see that Mr. Riah – named after the Hebrew word for friend, re’a – was “generous and loyal” and that a young girl he helps remarks about the Jews, “‘I think there cannot be kinder people in the world.'” She immediately sat down to pen another letter to Charles Dickens. This one thanking him for his great compliment to her and the Jewish people. He wrote back with much pleasure and revealed that in the future he wanted his work to reflect his true friendship with Jewish people.

To show his sincerity, he published essays condemning prejudice and in the reprint of Oliver Twist, he replaced mentions of “the Jew” with Fagin’s name so as to “make it clear that Fagin didn’t represent all Jewish people.” Eliza sent Charles Dickens one more letter – this time with the gift of an English-Hebrew Bible – praising his ability to right a wrong, and Dickens responded with one more letter thanking Eliza for speaking up.

An extensive Author’s Note reveals more about the history of prejudice against Jewish people in England from the 1200s until 1846, when attitudes began to change and a repressive law was repealed. Nancy Churnin also includes more details about Eliza Davis the communications between her and Charles Dickens, and Dickens’ daughter upon his death. Source Notes and acknowledgments are also included. 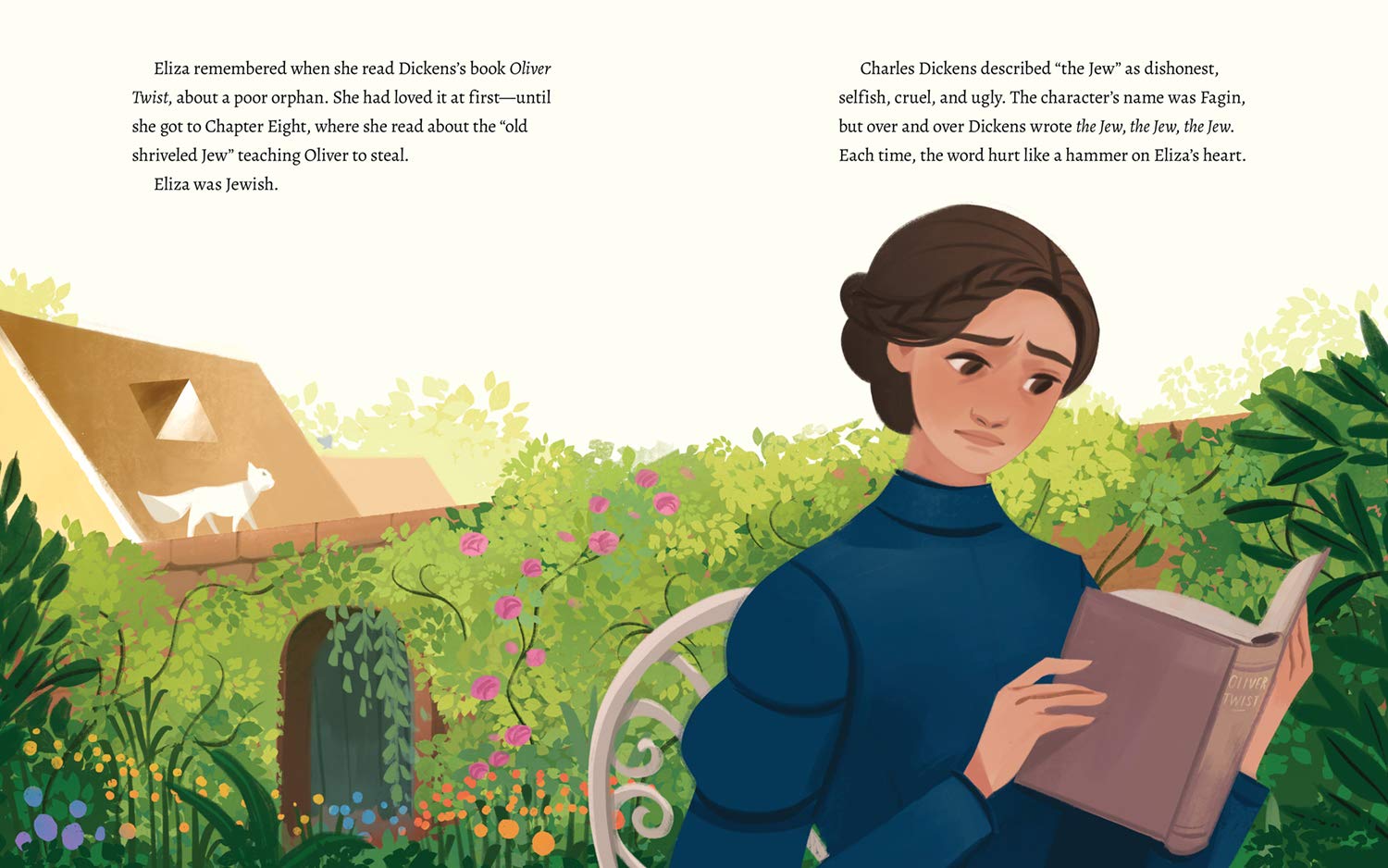 Nancy Churnin’s compelling story about the facts surrounding the correspondence between Eliza Davis and Charles Dickens shines a spotlight on a little-known, but important series of events in the life and inspiration behind Dickens’ growth and responsiveness as a writer. Eliza Davis, who acted on her convictions with confidence and courage, makes an inspiring role model for children who may want to voice their opinions on wrongs they see, read, or hear about.

Churnin’s introduction of A Christmas Carol, a novel that most children and adults know, allows readers to understand the important and influential connection between a person’s thoughts, words, and writing and their actions. It also provides a deeper resonance to Eliza Davis’s reminder to Dickens of his past, present, and future and to Dickens own change of heart from his first reply to Eliza to his portrayal of the Jewish character in Our Mutual Friend and his other actions.

Bethany Stancliffe takes readers back to the the 1800s in her rich illustrations full of details of the period. Kids will be interested to see how authors published their work at the time. Her faithful depictions of Eliza Davis and Charles Dickens informs readers on the influence that a young person had on such an established and lauded author. Eliza’s pleasure in Dickens’ stories and her pain on encountering the prejudicial portrayal of Jewish characters is clear, which makes her dilemma all the more meaningful. The final spread, in which Eliza Davis and Charles Dickens, facing each other, are connected by the letters they exchanged.

An important story about a beloved author and the woman who influenced his work and life, Dear Mr. Dickens will spark conversations on issues of prejudice, standing up for ones beliefs, personal change, courage to address wrongs, and many other topics. The book is highly recommended for home bookshelves and a must for school and public libraries.

Discover more about Nancy Churnin and her books on her website.

To learn more about Bethany Stancliffe, her books, and her art, visit her website. 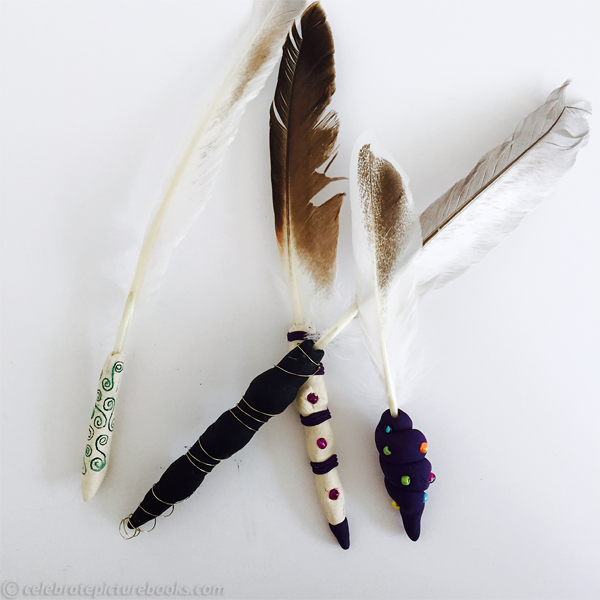 Writing a proper letter is more fun with a fancy pen! you can fashion your own quill pen or liven up a ballpoint pen or a marker with this craft!

You can find Dear Mr. Dickens at these booksellers