This week Juneteenth became America’s eleventh federal holiday when President Joe Biden signed the Juneteenth National Independence Day Act into law on June 17. Juneteenth commemorates the end of slavery and celebrates the historical date of June 19, 1865, when Union army general Gordon Granger came to Galveston, Texas to read “General Order #3,” which proclaimed the emancipation of all those held as slaves in Texas. On the one-year anniversary of the proclamation, freedmen in Texas organized the first Jubilee Day, which became an annual event. Celebrations later spread across the south and then nationwide. The day includes parades, festivals, music, readings by prominent African-American writers, educational events and barbecues, complete with refreshing strawberry soda. You can learn more about Juneteenth and the symbolism of the flag on Oprah Daily.

As nighttime falls, Mazie would like to go outside to play, but she’s told it’s too late. Later, she’d like a cookie, but when she asks the answer is “‘Not now, little one. It’s too close to bedtime.’” And when she wants to stay up late, she’s reminded of the bedtime rule. Mazie’s dad notices that she’s feeling a little grumpy and asks why. “‘I can’t go where I want, have what I want, or do what I want,’” Mazie says. To cheer her up, Mazie’s dad tells her that tomorrow she can celebrate. 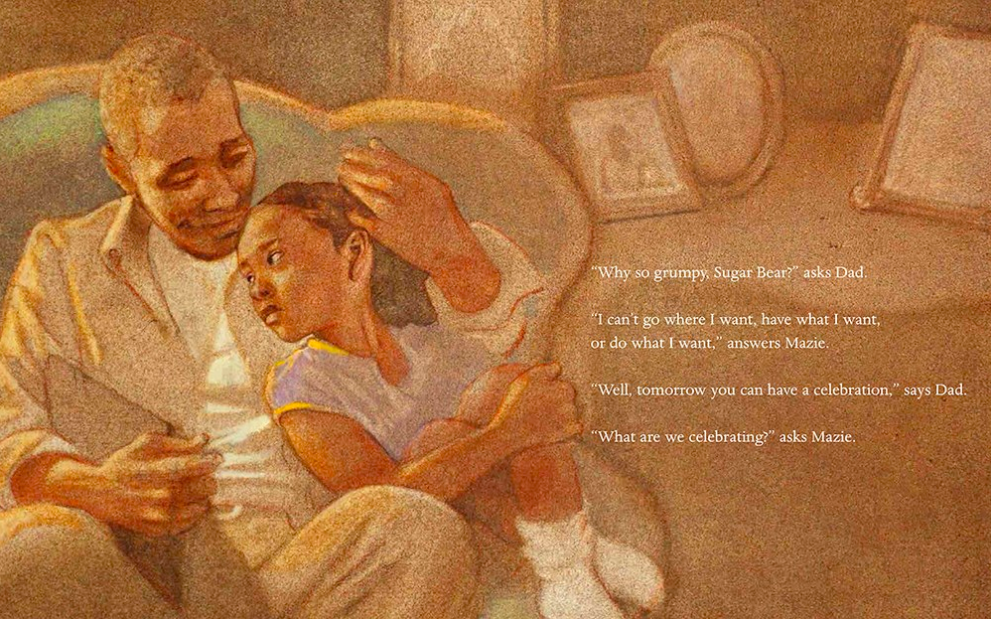 Mazie’s dad lifts her into a big hug and tells her that tomorrow they will celebrate the day when her “great-great-great grandpa Mose crossed into liberty.’” He tells Mazie about Grandpa Mose’s life as a slave working in the cotton fields from sunup to sundown, all the while thinking about freedom. Before they slept, they prayed and planned for a better future. And, finally, it came.

On June 19, 1865 in Galveston, Texas, Grandpa Mose heard President Abraham Lincoln’s proclamation that the Civil War was over and that slavery was abolished. Cheers rang out from the crowd gathered there. Then “‘the cheers became dancing. The dancing became celebrating. It went on and on into the night.’” 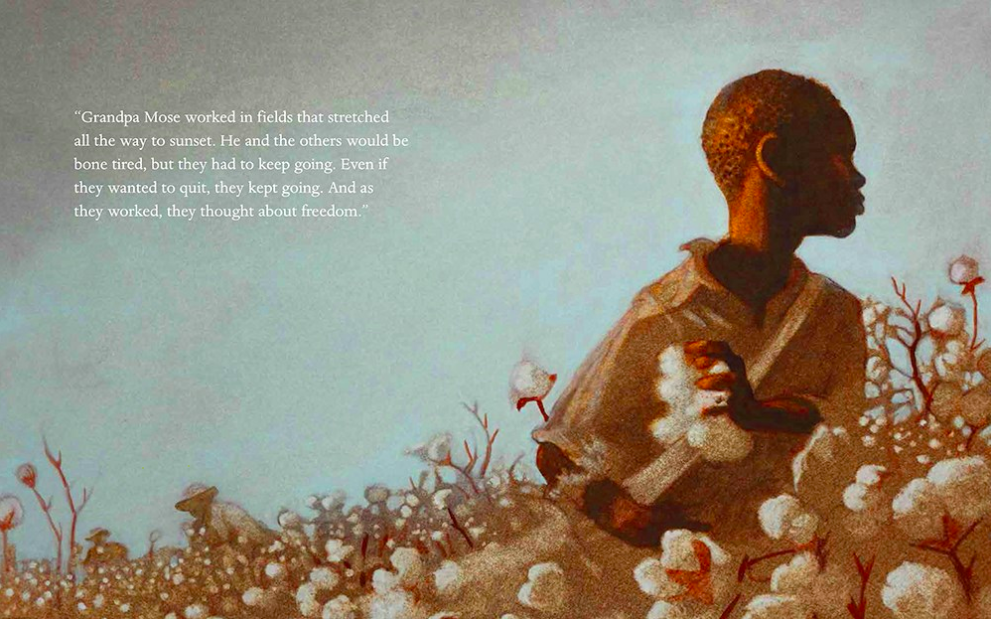 Now when Grandpa Mose worked, he was paid for his labor. He saved and made that better future he had long prayed and prepared for. Life for Black people continued to be hard as they struggled for equality, lobbying for jobs, schools, voting rights, opportunity. “‘But they never gave up.’” Mazie’s Dad tells his daughter, “‘and every year on Juneteenth, they celebrated and remembered.’”

Black people moved forward, with higher education, talent, and perseverance woven with forgiveness. They became heroes and leaders—even the President of the United States. Now, Mazie’s dad says, it’s her time to celebrate where she’s come from and where she’s going.

A short note about the history of Juneteenth follows the story.

Floyd Cooper’s beautiful and soft-hued paintings accompany his straightforward storytelling with emotional resonance as Mazie snuggles close to her father in a big chair and listens as he tells her about her great-great-great grandpa Mose, who was among the first slaves to be emancipated on June 19th in 1865. Cooper focuses on the perseverance, faith, and optimism that filled the hearts of Mazie’s ancestors and the generations of Black families who followed. His paintings span the more-than-150 years since Lincoln’s proclamation, with powerful depictions of newly freed men and women standing proudly in their best clothes as if posing for a photograph; the types of jobs Black men were able to get in the mid 1900s; a freedom march of the 1960s; and another grandfather passing down the stories to a younger generation gathered at his feet.

Cooper’s image of a Black woman raising her hand in university classroom of all-white students and his simple mention of those who have become leaders—with an illustration of Barack Obama taking the presidential oath of office, provide opportunities for further discussion and research. Mazie’s father’s exhortation for his daughter to celebrate now is paired with images of today’s kids laughing and smiling while they enjoy a cookout, cheer, dance, and parade, while always holding their past close to their hearts.

A gorgeous book to celebrate not only Juneteenth but the accomplishments and history of Black Americans, Juneteenth for Mazie is highly recommended for all readers and should be included in school and public library collections.

To learn more about Floyd Cooper, his books, and his art, visit his website.

You can celebrate our newest federal holiday with these two printable Juneteenth coloring pages!

You can find Juneteenth for Mazie at these booksellers