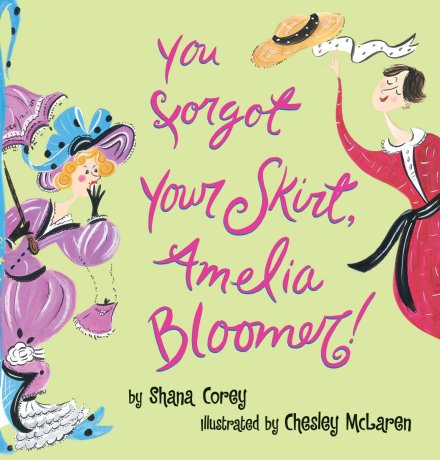 Does summer make you feel forgetful? The hot, hazy weather and more relaxed schedule can loosen up that school-time vigilance and well… make you forget things. But that’s okay! I Forgot Day was established to give people an opportunity to make up for lapses in memory. If you’ve forgotten a special event, birthday, or anniversary, it’s not too late to apologize and let the person know you haven’t forgotten them—just that particular date. Of course, there are also things that may have slipped your mind that bear remembering or lessons from the past that should not entirely be forgotten. Today’s holiday is a good time to embrace those memories—just like today’s book shows!

You Forgot Your Skirt, Amelia Bloomer!

“Amelia Bloomer was not a proper lady.” But that was all right with her because she “thought proper ladies were silly.” Amelia found it silly that proper ladies couldn’t vote and were not supposed to work. In response, she protested as a suffragette and began her own newspaper called The Lily which only published news about women. Amelia hired other women to work there.

But to Amelia, the silliest thing of all was women’s long dresses. They “were so heavy, wearing them was like carting around a dozen bricks.” She thought women looked like “walking broomsticks. They acted like broomsticks too because their skirts swept up all the mud and trash from the street.” And the corsets they wore choked off their breathing and made them faint. To keep those long skirts standing out, they also wore wire frames that got squashed and squeezed in doorway after doorway. “Even little girls had to wear proper dresses. So they couldn’t run and jump and play.” 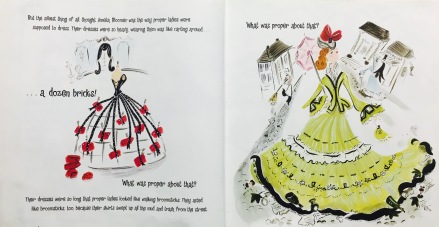 Amelia Bloomer was determined to do something about it. Then one day, Amelia’s friend Elizabeth Cady Stanton came to visit and brought her cousin Libby. “Libby looked remarkable” because “she was not wearing a dress!” Libby thought proper dresses were silly too. Libby’s dress was shorter and not so poofy, and underneath Libby was wearing a kind of pants. Amelia immediately sewed herself such an outfit.

When people saw Amelia in her new outfit, they gasped. “‘You forgot your skirt, Amelia Bloomer!’ called a little boy.” But Amelia didn’t listen to them. She felt so free that she “ran and jumped and twirled.” She wanted all women to know about these wonderful clothes, so she wrote about them in The Lily. Women all over the country loved them and wanted to know where they could get them. 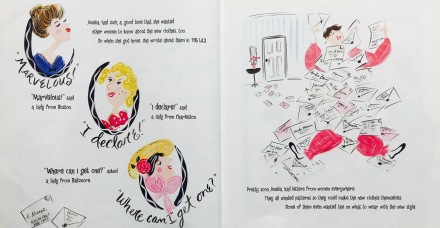 Amelia was flooded with letters from women asking for the pattern so they could make an outfit for themselves and for advice on how to accessorize. “Some people called the new style of clothes the American Costume. Most people just called them Bloomers.” Of course, there were many proper gentlemen who disliked the bloomers. Some thought they would just “lead to more rights for women.”

After some time, bloomers went out of style. “Proper ladies and gentlemen everywhere breathed a sigh of relief.” They were sure women’s clothing would go back to “normal,” and that everyone would forget about Amelia Bloomer and her improper ideas. “Well… what do you think?” 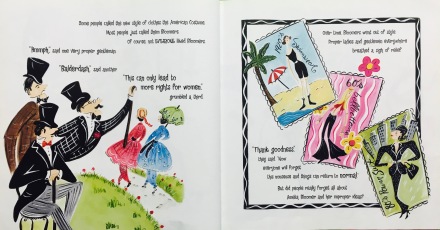 These days it does seem ridiculous that women once had to live in such restrictive, and even dangerous, clothing. Although children may see pictures of Victorian dress, they might not be able to fully appreciate all that was going on under those voluminous skirts. It’s with a sly wink to those times and people’s attitudes that Shana Corey presents her biography of Amelia Bloomer. Through her light touch, Corey highlights not only the early women’s rights movement but nudges children to keep vigilant to see that freedom and rights continue to come to all.

Chesley McLaren’s bright, delicate illustrations bring a Victorian vibe while reveling in fresh colors and offbeat perspectives. Kids may grow wide-eyed to see a woman holding onto a bedpost as her corset is drawn tight and other women fainting as a result of this necessary item. McLaren also exposes the “dirty” truth as a woman’s hem sweeps along apple cores, bones, bottles, and paper as she walks. An image of a hoop framework festooned with bricks, gives kids an idea of how much these dresses weighed. Proper ladies and gentlemen in their stuffy clothes may point, stare, and harrumph at Amelia in her comfortable bloomers, but Amelia gets the last laugh as she floats, twirls, and moves freely in her trendsetting pants. The influence Amelia Bloomer had on future fashions and the rights of women is delightfully shown in postcard-type snapshots of styles from the 1920s,1960s, 1980s, and in a two-page spread of a park today.

Awarded many accolades as one of the best books of 2000, You Forgot Your Skirt, Amelia Bloomer! can be found at public libraries and from used booksellers. The book makes for an entertaining yet educational way for kids to learn about history.

Discover more about Shana Corey and her books on her website

To learn more about Chesley McLaren, her books, and her art, visit her website.

Four kids have forgotten their sunglasses! Can you follow the paths to match each child with the right pair in this printable puzzle?

You can find You Forgot Your Skirt, Amelia Bloomer! at these booksellers