Established in 2012, National Bike to School Day raises awareness for communities to provide safe biking and walking routes for children and young people. Nearly 3,000 cities and towns across the country have planned events to get people to leave their cars at home and enjoy fresh air and exercise on their way to school. Although only a one-day holiday, National Bike to School Day encourages communities to continue developing safe ways for children to walk to school, including walking buses and bike trains. To learn more about events in your area or how you can get involved in making your own community safer for walking and biking visit walkbiketoschool.org.

Abrams Books for Young Readers sent me a copy of Born to Ride for review consideration. All opinions are my own. I’m happy to be partnering with Abrams Books in a giveaway of the book. See details below.

Born to Ride: A Story about Bicycle Face

Open the cover of this remarkable picture book to a two-page illustration and you might notice something unusual—for our time. What is it? Read on and see…

As Louisa Belinda Bellflower gazed out her window at a man riding a bicycle in Rochester, New York, in 1896, she wished that she could ride one too. But girls and women weren’t allowed to ride bicycles, just as they weren’t allowed to vote or wear pants. Louisa’s brother, Joe, had a brand-new bike, and “riding it looked like a whole lot of fun.”

One day, Louisa took off her frilly skirt and put on her brother’s pants and asked him to teach her how to ride. There were, however, a couple of concerns. One was what would their mother say? Another was the horrible medical condition, bicycle face. Everyone knew about it, and Doctor Brown was strict on this matter. He said, “‘girls aren’t strong enough to balance, that your eyes will bulge, and your jaw will close up from the strain of trying—maybe FOREVER.’”

Louisa considered this fate, but Joe didn’t have any of these symptoms. Even though she was a little nervous, she tried it anyway. Louisa fell again and again, but when Joe asked her if she wanted to quit, she continued. She began peddling again and soon had the knack for it. “With some alarm, she felt her eyes bulge, and her mouth widen—into a gigantic, joyous smile.” 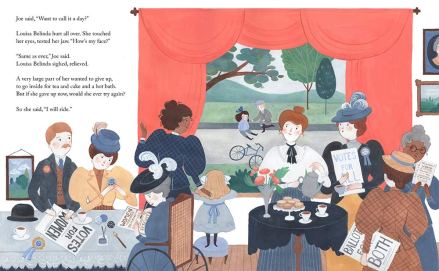 She rode back and forth down the path and when she got home, her mother said, “‘those pants look quite practical, Louisa Belinda,’” And Louisa turned a somersault just to show her she was right. Then Louisa’s mother asked Joe if Father’s bike was in good shape. Joe said it was, and their mother set about converting her skirt into a pair of pants. When they were finished, Louisa and her mother wheeled the bikes out side-by-side and took off. “‘Mother,’” Louisa said, “‘what will your bicycle face be, I wonder!’”

You only need to turn the page to see. Louisa’s mother is smiling and that original two-page spread has been transformed with lots of women and girls riding the roads that lead to the Votes for Women rally in the town green.

An extensive Author’s Note follows the text and explains the origin of “bicycle face” and other such imagined bicycle-related maladies as well as the opposition to women’s riding bicycles. Also included is a discussion on the women’s suffrage movement.

Both children and adult readers will be astounded at Larissa Theule’s eye-opening story that reveals just one of the many obstacles women have had to overcome in their quest for equal rights. Theule’s story, told through the eyes of a girl with pluck and self-confidence, is well targeted to her young audience with an engaging undercurrent of humor at the nonsensical reasoning behind the ban on women’s bicycle riding and even the constricting clothing of the time for girls and boys. As Louisa falls again and again while learning to ride, Theule infuses her story with the idea that perseverance wins out—a concept she not only applies to learning a new skill, but to the parallel story of women’s suffrage that runs throughout the illustrations.

Kelsey Garrity-Riley’s charming illustrations evoke the late 1800s, giving kids a view of history with Victorian-style houses; skirts, bloomers, and pinafores for girls and short-pant suits for boys; and an old-fashioned sewing machine. Adding depth and context to the story, Garrity-Riley follows Louisa and Joe’s mother as she paints “Votes for Women” and “Ballots for Both” signs and later hosts a women’s suffrage tea attended by white and dark-skinned women, a woman in a wheelchair, and one progressive man. Garrity-Riley cleverly combines images of Louisa’s indomitable spirit with these depictions of protest to reinforce the theme and lesson of the story.

To  jumpstart discussions about equal rights for all, Born to Ride: A Story about Bicycle Face is a unique and fascinating addition to home, school, and public libraries.

Discover more about Larissa Theule and her books on her website.

To learn more about Kelsey Garrity-Riley, her books, and her art, visit her website.

Ride with Me! Maze

Two girls want to ride bikes together. Can you help them find each other in this printable maze?

You can find Born to Ride: A Story about Bicycle Face at these booksellers

4 thoughts on “May 8 – National Bike to School Day”