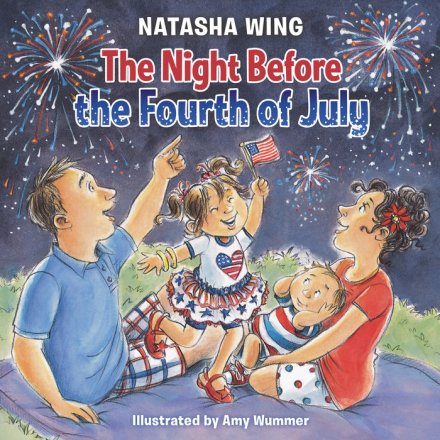 On July 2, 1776 the Continental Congress voted for Independence from Great Britain. Two days later delegates from the 13 American colonies adopted the Declaration of Independence, a document penned by Thomas Jefferson asserting the equal rights of all and establishing a democratic government. It went on to name the America’s grievances against Great Britain and to create from the colonies the United States of America. Independence Day was made a federal holiday in 1941. The day is celebrated with official ceremonies, parades, picnics, and fireworks displays.

The Night Before the Fourth of July

The Fourth of July is tomorrow, and one family is getting ready! While Dad hangs the American Flag on the front porch, Mom is decorating the fence with red, white, and blue bunting. While they sleep, the brother and sister dream about fireworks. The next day every one dresses up in patriotic stripes and stars to attend the town parade, complete with “marching bands and 4-H club goats.” Even the Mayor joined in the fun, tossing candy to the crowds from a convertible car, while “an Uncle Sam walking on stilts brought up the rear.”

After the parade friends and family came to the house for a barbeque, but as Dad flipped burgers and the table was laid with summer treats, gray clouds threatened overhead. Just as everyone “sat down it started to pour. ‘Grab the food!’ shouted Mom and [they] raced through the door. In hot dogs! In salads! In blueberry pie! In melon and corn! Keep those potato chips dry!”

Everyone piled into the kitchen and continued to munch. But what about the fireworks? They watched out the window at the rain pouring down. A Fourth of July without rockets and sparkle and light just wouldn’t be the same. But there was no need to worry. After the storm burst, the clouds went away and the sky turned blue.

As dusk approached they all drove to the park. Dad lit the sparklers and set the glow sticks alight. Soon, “the first firework was launched high into the night. It bloomed like a flower exploding with light.” People oohed and ahhhed, but for some little ears the booms were too loud. Then the band played the national anthem and Dad sang along, even if he was “way out of key.”

As the last notes faded into the air, it was time for the finale – a spectacular display of color and wonder. “When the last firework fizzled like fairy dust in the sky, [they] all cheered and shouted, “Happy Fourth of July!”

Part of Natasha Wing’s “The Night Before” series, this summer holiday book offers young readers all the excitement and fun of the Fourth of July from community events to family picnics to, of course, the fireworks that wrap up this patriotic celebration with flair. While maintaining some of the cadence of its Christmas cousin, The Night Before the Fourth of July is jauntily unique. Young readers will be captivated by the story’s joyous preparations and “Uh-oh! What now?” moment and will enthusiastically look forward to their own family traditions.

Amy Wummer’s engaging illustrations invite kids into a big family Fourth of July celebration with all the red, white, and blue decorations and glitzy fireworks. All young readers’ favorite parts of the holiday are here and warmly depicted as the family raises their flag, enjoys the flavor of summer delights, and joins the rest of the town at the annual fireworks show.

The Night Before the Fourth of July is a great book to keep on the shelf for the holiday itself (it makes a great take along to that wait for the sky to turn dark) and for other family story times. 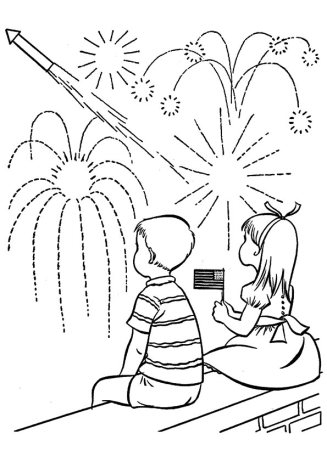 The fireworks display is one of the best parts of the Fourth of July. You can make this printable Glittery Fireworks Coloring Page as sparkly as the real thing by outlining the bursts with a sprinkling of red, white, and blue glitter! Just grab your colored pencils, crayons, or markers plus some glue and glitter and have fun!