One of the rights of passage for children going to school for the first time (or starting the next grade) is shopping for new clothes and supplies. These include pencils, paper, folders, three-ring binders, lunchboxes, and the backpacks to store it all in as well as a few new shirts, a couple pairs of pants, and maybe a jacket to take kids into the cooler weather. And of course a trip to the shoe store is paramount for those fast-growing feet! If only shopping could be as exciting as it is for the little boy in today’s book. With a little imagination it can be!

S.A.M. has an important missions to complete. He is “digging for the Lost City of Raisins…tracking down the treacherous green spitting bug…balancing on high places…and stealing home”—all while K is hanging out the laundry. K looks at S.A.M sitting on the ground with his box of raisins and says, “‘You need new shoes.’” And it’s true. S.A.M.’s red shoes are tattered and scuffed, and his toes are even poking out of the sole.

On the way downtown, S.A.M tells K that he can’t decide between rocket shoes and vanishing shoes as he reads a document titled Plans for World Domination. At the store they are met by a clerk carrying a tall stack of boxes. He assures the pair that he’ll help them in a minute, but with his eagle eyes S.A.M. thinks the “Shoe Store Man looks shifty and orders his agents to “‘frisk him.’” The Shoe Store Man turns out to be okay, and S.A.M. tries on lots of shoes. He finally settles on a pair with tiger stripes, and K gets the same for herself.

Time for lunch? “‘ROAR,’” answers S.A.M. All the shoe buying and secret agent prowling has made S.A.M. hungry. “He orders the double buffalo burger with a side of snakes and an electron float. “‘We are matching tigers,’” he says to K. K pokes her fork into a snake fry. “‘ROAR,’” she says.

The bus ride home is fraught with danger as S.A.M. foils an attempt by a spy in a stroller to steal the Plans for World Domination. “‘Phew! That was close,’” K says. The stairs to the front door seem unusually steep and tiring, and S.A.M is feeling “whoozy.” There’s only one explanation, he decides: his electron float must have been spiked. S.A.M drifts off into a short nap where he dreams of “beautiful poisonous butterflies and dangerous inflatable frogs.”

Later he has a secret meeting with Agent Coyote, Agent Ted, and Agent Pig. Their mission is to decode the Plans for World Domination by three o’clock. S.A.M. then goes looking for K. He can’t find her anywhere—not in the Chamber of Silence (the closet), not in the Holding Cell of Dispair (the bathroom), not in the Torture Chamber (the piano room), and not in the Rocket Silo (the utility closet). She’s not even in the Darkest Valley of Doom (the basement). Just then S.A.M. hears thunder. 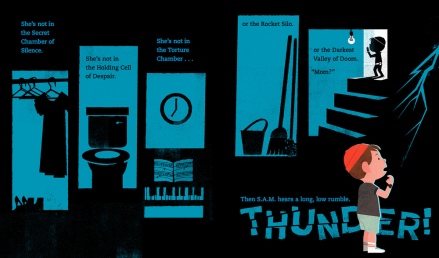 S.A.M. grabs his new orange and black striped shoes, ties up the laces and races to the rescue with the speed of a tiger. K is outside “bringing in the clouds.” Some are being torn away by the wind, and S.A.M. makes a flying leap to save them. As the storm rages outside, S.A.M. and K relax inside with “steaming mugs of lava topped with dollops of candied gardenia and pearls” while discussing S.A.M.’s latest mission. It’s lucky, he says that his “Team of Expert Spies warned him about the storm.” 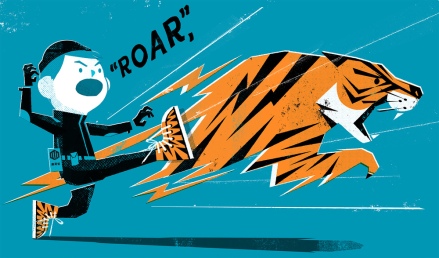 Tim Wynne-Jones channels every kid’s dream of being a spy in this funny send up of an ordinary day of shopping and doing laundry. Using clever acronyms and a full dose of imagination, Wynne-Jones turns raisins into gemstones, French fries into snakes, fluffy laundry into clouds, and a boy into a secret agent man with tiger shoes and abilities. K is a supportive sidekick, encouraging S.A.M’s ingenuity and quick thinking and playing along with his day-brightening shenanigans. S.A.M.’s names for the various rooms in the house will make kids laugh, and they will also love his sweet little boy alter-ego.

Brian Won deftly and humorously shifts between S.A.M.’s secret missions and his reality, depicting S.A.M.’s imaginary world in blue, black, and white and his real world in vivid color. Crafty juxtapositions include an image of the Shoe Store Man, his arms loaded with boxes and his face peeping between them on the left-hand page while on the right-hand page, S.A.M. in his spy gear shuffles along a wall of shoe-display shelves where two illuminated eyes search the darkness. Another occurs when S.A.M and K are having lunch. The top two-thirds of the two-page spread is cloaked in darkness, snakey French fries, an exploding drink, and cool costumes while the lower third shows their regular clothes and new matching tiger sneakers. The tiger unleashed by the new shoes is a vibrant flash in this book that moves as smoothly between life and fancy as a wild cat on the chase.

Check out Tim Wynne-Jones’ website for a vast array of books and other fun stuff!

A gallery of work by Brian Won is awaiting you on his website!

Get Ready for Kindergarten Month Activity

It’s fun and easy to design your own shoe laces for your favorite sneakers or boots or even for tying up hair styles, decorating your room, or you name it!