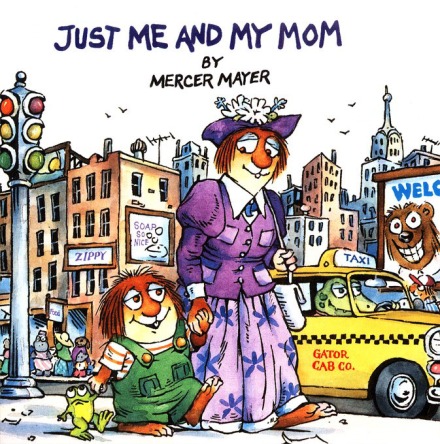 We always love our moms, but on the second Sunday of May we celebrate everything they do for us. On May 9, 1914 President Woodrow Wilson signed a proclamation establishing Mother’s Day as “a public expression of our love and reverence for the mothers of our country.”  First envisioned to honor all mothers instead of primarily your own, the day has become a personal holiday in which families celebrate in their own unique and meaningful way.

Just Me and My Mom

Little Critter and his pet frog were having a day out with Mom, traveling into the city on the train. Little Critter even got to buy the tickets himself. He’s also learned some manners and tried to help his mom get on the train, “but the steps were too high,” so his mom helped him instead. Soon they were all settled in and waiting for the conductor to punch their tickets. “But when the conductor came by, the tickets were gone. So Mom paid the conductor some more money.” 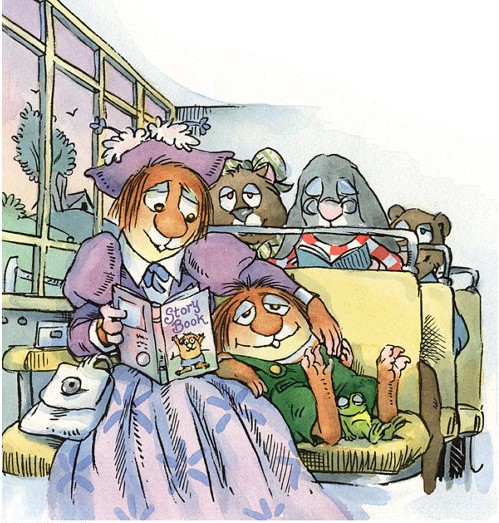 They disembarked into a very busy city. All the crowds, sounds, and sights were a little overwhelming, but Little Critter was only thinking of his mom. He “held her hand so she wouldn’t be scared.” Their first stop was the Museum of Natural History with its rooms full of dinosaur skeletons and eggs that are so tempting to touch.

In the next room there was a Native American exhibit, complete with mannequins wearing costumes to try on. Little Critter dressed up “just for Mom. But the museum guard didn’t like that.” The guard quickly showed them into another room where the Aquarium was. “There were lots of fish in a big tank of water.” Somehow Little Critter’s frog joined them. During the seal show, Little Critter became part of the program. He didn’t mean to end up on stage, he just wanted “a closer look at the seals.”

The art museum had weird pictures, and lunch at the fancy restaurant ended before it even began when the maître d’ threw them out for having a frog at the table. They “decided to have a hot dog from a stand. That was more fun anyway.” Then came the boring part. “Mom wanted to go to a big store full of dresses and stuff like that. Yuck.” Little Critter even had to be fitted for a new suit. When they passed the toy department, Little Critter found the enormous teddy bear he had “always wanted but Mom said, “‘It’s time to go.’” 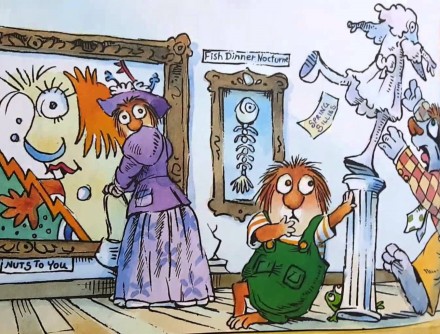 Finally, it was time to head back to the train station. They took a taxi and Little Critter “got to ride in the front seat. The taxi driver drove real fast. That was cool.” At the ticket window Little Critter’s mom had a good idea. She bought the tickets herself because she “didn’t have enough money to buy more tickets if these got lost.” All in all, what would Little Critter say about his day? “We had fun, just me and my mom. I even stayed awake all the way home—well, almost.”

With an eagle eye and perfect pitch, Mercer Mayer reveals the way it is for parents and kids—with plenty of laughs sprinkled in. In Just Me and My Mom, the day may be full of mishaps and shenanigans, but Mayer is always focused on the sweet intentions of Little Critter and the loving relationship between mother and child. Mayer’s city bustles with his well-known animal characters who are colorful in so many ways. Kids will recognize and giggle at Little Critter as he plays ball with the seals, picks up the dinosaur egg, scowls at the tailor, and enjoys a high-speed taxi ride through the city. Adults will appreciate the mortified looks on Mom’s face and also understand her ready smiles.

You can enjoy tons of fun on the Little Critter World-Wide Network, including activities, movies, apps, a sing-a-long, and more! 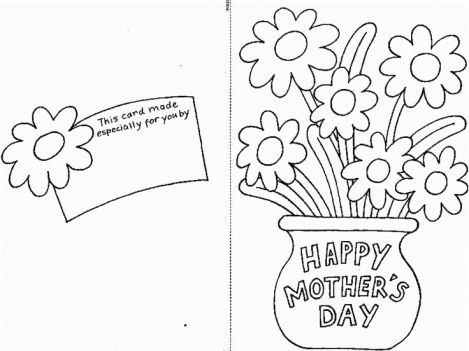 Here’s a pretty vase of flowers for you to color for your mom! You can make it even more personal by writing one thing you like best about your mom in the center of the flowers. Get your printable Happy Mother’s Day Card here!