The definition of spiritual wellness is unique to each person. When you think deep down about what gives your life purpose, meaning, and happiness, what do you find? This month encourages people to discover if their beliefs, activities, work, family relationships and friendships are all in harmony. It’s also important to take care of you, by taking time to reflect each day and to plan fun and relaxing activities. Springtime and Easter are opportunities for renewal, making March a great time to consider your spiritual wellness.

Zonderkidz sent me a copy of today’s book to check out. All opinions are my own.

The Berenstain Bears and the Easter Story

Written by Jan and Mike Berenstain

On the way to Sunday school one spring morning, the warm sun was shining, daffodils were blooming, and birds were feeding their babies, but all Brother, Sister, and Honey Bear could think about was Easter candy. As they entered their classroom, Brother said his favorite Easter candy was chocolate bunnies, Sister said hers was marshmallow chicks, and Honey Bear cried “‘Jelly beans!’” Then Missus Ursula revealed that her favorite was black jelly beans, but also that Easter is about more than candy.

Brother and Sister said they knew that. Easter was about “‘stuff in the Bible,’” Brother told Missus Ursula. “‘Yeah,’ agreed Sister. ‘Bible stuff.’” And Honey Bear added, “‘Stuff!’” Missus Ursula thought the cubs’ understanding could use a little more rounding out, so she took them into the next classroom, where the older bear cubs were putting on a play.

The stage was set with props of palm trees, rocks, and buildings from the Holy Land, and cubs were dressed in costumes. One of the performers began telling the Easter story. “‘Long ago, in the Holy Land, there was a man named Jesus. He traveled the countryside teaching about God and what God wanted for his people.’” The narrator went on to tell about Jesus’s miracles and how “‘he could do these wonderful things because he was the Son of God.’”

Because many people listened to Jesus and followed him, government officials and others were angry. They didn’t believe he was the Son of God and were afraid that Jesus wanted to become the king. One day Jesus rode into the city of Jerusalem on a donkey and crowds greeted him with shouts of “‘Hosanna!’” The leaders of Jerusalem believed Jesus was becoming too powerful.

One night while Jesus was praying in a garden, “‘soldiers were sent to arrest him. They took him away to prison.’” Later, he was questioned by a “‘wicked judge…who wanted to show everyone that Jesus was not a king.’” Then “‘he ordered for Jesus to be put to death by hanging on a wooden cross.’” On the day Jesus died, the skies became black and the wind howled. Everyone was afraid.

After Jesus died, he was taken by his friends and put in a tomb. A huge stone was rolled in front of the entrance. For two days Jesus lay in the tomb. “‘On the morning of the third day after Jesus died, some women who knew Jesus came to weep at his tomb.’” When they got there, they saw that the stone had been rolled away. Jesus was no longer in the tomb. “‘An angel told the women not to be afraid. He told them that Jesus was alive once more.’” 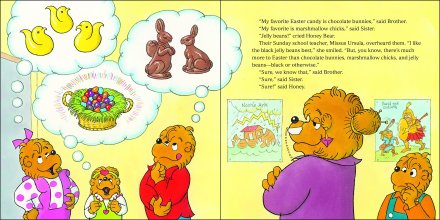 In the days and weeks after Jesus rose, he visited his friends. “‘They were amazed and fell down and worshiped him. Jesus told them they should spread the good news about what had happened.’” After visiting with his friends, “‘Jesus rose up to heaven to be with God, his Father.’” Following the play, the cubs understood that Easter is about more than candy. But “‘does this mean we shouldn’t eat any Easter candy?’” Brother asked.

“‘Certainly not!’ laughed Missus Ursula’” and confessed that she’d miss her jelly beans too. But she reminded the cubs that after they got their Easter baskets, they go to church to celebrate the real meaning of Easter. “‘Hooray!’ the cubs said. ‘And Hosanna!’ added Missus Ursula. ‘He is risen!’”

A page of colorful stickers depicting images from the story are included, and discussion questions and fun activities related to the book follow the text and may inspire kids to put on a play of their own.

Since the early 1960s, the Berenstain Bears have been delighting readers with their shenanigans, wit, and always-close family relationships. In The Berenstain Bears and the Easter Story, part of the Living Lights series, these beloved characters talk about and reveal to children the deeper meaning of Easter, with a focus on Jesus’s resurrection. The straightforward telling of the Easter story through a Sunday school play is welcome for parents, caregivers, and other adults who are looking for a book to share and a way to talk about both the religious and the fun aspects of this holiday with children. The dialogue-rich structure also lends a personal touch to any reading, letting the adult sound as if they are telling the story themselves.

The illustrations of Bear Country are bathed in the warm glow of spring as the sun rises over the Bear’s tidy treehouse home. Brother’s, Sister’s, and Honey Bear’s dreams of candy will enchant little ones as will the familiar scene of walking into church on Easter morning. Depictions of the play are vibrant and detailed but with a homey and childlike feeling to the props and acting.

For adults looking for a traditional, Bible-centered telling of the Easter story with engaging  characters that children will respond to, The Berenstain Bears and the Easter Story is a superb choice for home and church libraries.

A little bit of candy makes Easter or any spring day sweeter! With this Sweet Bunny Candy Jar, you can give a child, a friend, or even yourself a special treat that will make you hoppy!

To Make the Body and Face

To Make the Hat

To Insert the Ears