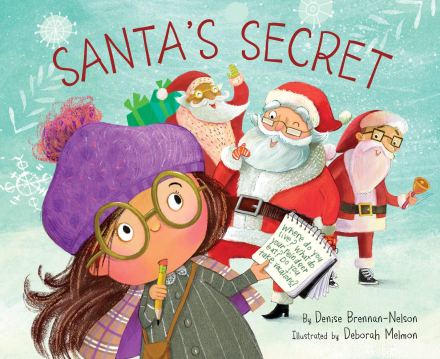 It’s that time of year when kids across the country visit with Santa to tell him what they’d like for Christmas. Today’s book takes a look at the age-old question—who is the real Santa?

Singing carols all the way, a family drove to the city “all festive and bright” to watch the parade. The little girl climbed on her father’s shoulders to get a better view, especially of Santa in his sleigh. After the parade, the family walked through the city, looking at the beautiful decorations. But on the corner, the girl sees another Santa ringing a bell.

As she declared, “‘That’s not the same Santa!’” everyone turned toward her and stared. The girl’s mother told her that Santa needs helpers, but she wanted to know who the REAL Santa was. Grandma whispered, “‘It’s Santa’s secret, just as it should be.’” But the little girl was determined to learn the truth.

At Santa’s station, the girl waited in line to meet the jolly old elf, and when it was her turn, she asked him some pointed questions. She asked him his name, the names of the reindeer, and whether Rudolph had a favorite treat. Then the questions got tougher as she wanted to know “who helps you decide what presents to give,” whether he liked to fly and where he went, whether the elves lived with him, and more.

As Santa answered each question, the little girl wrote down his answers in her notebook. But she had one more question that she thought would catch him off guard. She asked him straight out if he was the real Santa. But his only answer was “a tug of his beard and a wink of his eye.” Then he asked her what presents were on her list.

Over a mug of hot chocolate with marshmallows, the girl considered her notes and wondered if she had enough information to solve her case. As she puzzled and pondered, she caught a glimpse of a man who had a full white beard munching a cookie and reading a book. His coat pocket held carrots and his black boots were topped with striped socks.

She approached with her notebook, but before she could ask, “He said, ‘Reindeer like barley and berries to eat.’ / ‘But carrots,’ he added, ‘are their favorite treat.’” Then in the moment when she turned to look at her mother, the man disappeared without a trace, except for his mug of hot chocolate. Back home, the girl didn’t know if she’d seen the real Santa that day, but she agreed with her grandma that that is “‘as it should be.’”

Between trying to figure out which presents Santa will bring and wondering about the real Santa, most little ones become sleuths around the holidays. Denise Brennan-Nelson’s charming tale gives lyrical voice to that burning question about Santa’s identity while preserving the wonder of this childhood mystery. Brennan-Nelson’s jaunty rhymes and rhythm are a joy to read, as traditional Christmas sights and activities combine with the cozy warmth and community of a coffee shop to convey the homey feelings of Christmas. Her open-ended finale is sweet and just “‘as it should be,’” inviting young readers to wonder if they have seen the real Santa during their holiday jaunts.

Deborah Melmon’s cheery illustrations make sparkling use of “new” Christmas colors, brightening the pages with pinks, lime greens, teals, and purples along with the traditional red, green, and blue. Melmon’s diverse city backdrop provides a glowing setting for the little girl’s encounters with multiple Santas. The girl’s curiosity and inquisitiveness will resonate with kids, and they will cheer her on as she interviews Santa. Her questions provide Melmon with plenty of opportunities to show Santa and his reindeer in novel and kid-pleasing ways.

Discover more about Denise Brennan-Nelson and her books on her website.

To learn more about Deborah Melmon, her books, and her art, visit her website.

Get Ready for Christmas Activity 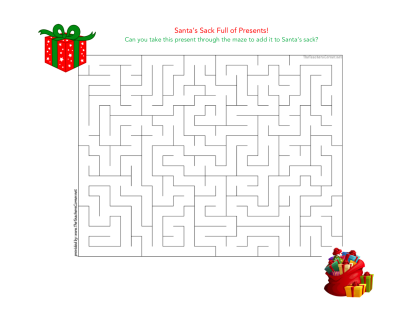 Santa has one more present to put into his sack. Can you help him take the gift through the maze in this printable puzzle? 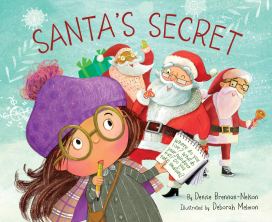 You can find Santa’s Secret at these booksellers

3 thoughts on “December 5 – Get Ready for Christmas”