The world’s oceans offer beauty, resources, and mystery. This month we celebrate these vast wonders while committing ourselves to their preservation. Pollution, climate change, and habitat destruction all threaten the fragile ecosystems that exist in and near the sea. We also remember the communities that rely on the oceans for economic stability as well as the men and women who work to protect the oceans and their unique creatures.

By the Fan Brothers

Finn gazed out his window at the sea. His grandfather, who would have celebrated his ninetieth birthday that day, would have told him it was a perfect day for sailing. They could have gone to the place his grandfather told him about where “ocean meets sky.” To honor his grandfather, “Finn build a boat. A boat fit for a long journey. One they had planned together.”

When Finn grew tired, he lied down for a nap. Upon waking, he felt the boat rocking and saw that the adventure had already begun. Magical clouds—a whale, a clipper ship, an anchor, and elephant, and an old captain’s pipe—floated above him. But Finn grew lonely as the boat sailed into the night. A “great, golden fish” noticed Finn and approached the boat.

“‘Do you know where ocean meets sky?’ Finn asked the fish.” The fish answered in the form of a riddle and offered to show Finn the way. They sailed to the Library Islands, where books were stacked like skyscrapers on which a hundred birds perched. Next they came to an island of enormous seashells. “And crossed a sea of moon jellies dancing.”

As the moon jellies soared into the sky to meet floating craft of all kinds, Finn wondered if he had found the place he had been looking for. Suddenly, his boat “began to lift from the water… or had the water fallen away?” His little boat joined the other fantastical ships, hot air balloons, and air ships that plied misty waves around a huge, floating whale. More and more ships, fish, kites, sea creatures, and even a castle joined the throng that soared past the full moon.

When the golden fish began swimming toward the moon, Finn followed. In the moon’s shining roundness, he saw the face of his grandfather, and “he wanted to say goodbye.” Although Finn had many questions for his grandfather, he turned when he heard his name called from far away. His grandfather sent Finn on his way home.

Finn’s mother nudged him gently, waking him for dinner—Grandpa’s dumplings. Before going inside, “Finn looked out across the sea to that magical place far away, where ocean meets sky” and thought “it had been a good day for sailing.”

The Fan Brothers’ distinctive mastery with mystical storytelling, combined with stunning illustrations that awaken the imagination in children and a wistful yearning for bygone dreams in adults, transforms a story about a boy’s feelings for his departed grandfather into heartening reassurance that a loved one is always with us in memories of moments, teaching, promises, and activities shared. Readers will be enticed to linger over every page of Finn’s mysterious and enchanting dreamscape, and the tender ending anchors the story in a tangible way that Finn and his family honor his grandfather.

Ocean Meets Sky casts a spell that lasts long after the covers have been closed and will beckon to be read again and again.

Discover more about Eric and Terry Fan, their books, and their art on their website. 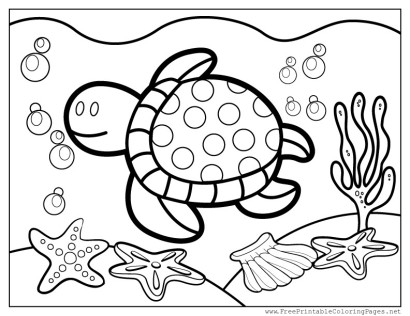 The ocean is full of amazing creatures. Here are three printable coloring pages to dive into!

You can find Ocean Meets Sky at these booksellers