For young readers there may be nothing more exciting than discovering a new series to fall in love with. Add in magic, danger, laugh-out-loud humor, and unique characters kids can really care about and the potion is complete. Today’s book is just such a wonder – enchanting for reading on one’s own or for exciting family story times.

On a stormy night, Cordelia Hatmaker is woken up to learn that the family boat, the Jolly Bonnet, has sunk and none of the crew – not even her hearty father, Captain Prospero Hatmaker– has survived. Knowing her father has survived worse at sea, Cordelia doesn’t believe her father is really gone and is determined to find him. Despite the family’s tragedy, the Hatmakers must present the Concentration Hat to King George to help him focus on signing France’s peace treaty. When they arrive at the palace, they find King George standing on the throne baaing like a sheep. A doctor dismisses the Concentration Hat and declares the king unwell. King George is sent away to the seaside to recover. Cordelia asks the Princess if she’d spare a ship to search for her father, but Lord Witloof, the royal family’s advisor, claims they can’t spare any ships since France threatens to go to war. The Princess commissions the Hatmakers to Make a Peace Hat and it must be ready in three days for her meeting with the King of France.

After learning that the Jolly Bonnet’s cabin boy has been found alive, Cordelia sneaks out to meet him. He hands her her father’s telescope before passing out. Rolled up inside the telescope, Cordelia finds a piece of paper that has had its ink washed away.

Cordelia is able to escape and the newspaper boy makes Cordelia exchange clothes with him. When he gives Cordelia his hat, all of “his” long hair comes spilling out of it. The newspaper girl then pretends to be Cordelia and allows herself to get captured by the police while Cordelia hides.

Cordelia, Goose, and some other friends sneak into the Peace talks. Lord Witloof puts Rage Clothes on the Princess, and she starts insulting the King of France. After a struggle, Cordelia pulls off all the Rage Clothes from the Princess and the Princess apologizes to the French King. He accepts and they both decide to sign the peace treaty. Lord Witloof tries to fire a cannon at the King of France because he wants to start a war so he can sell cannons, but Cordelia knocks him overboard.

The Princess declares all the Makers who were imprisoned free and King George, who Lord Witloof had imprisoned, is set free as well. Cordelia realizes that the King is wearing dangerous magical shoes that make him act crazy and she pulls them off. The King is relieved to be back to normal and throws a party for the Makers at the Guildhall. After receiving a medal, Cordelia announces that she thinks The Makers should all work together. That night Cordelia discovers her father drew her a map in magical ink that can only be seen in starlight. Her father may still be alive after all…. 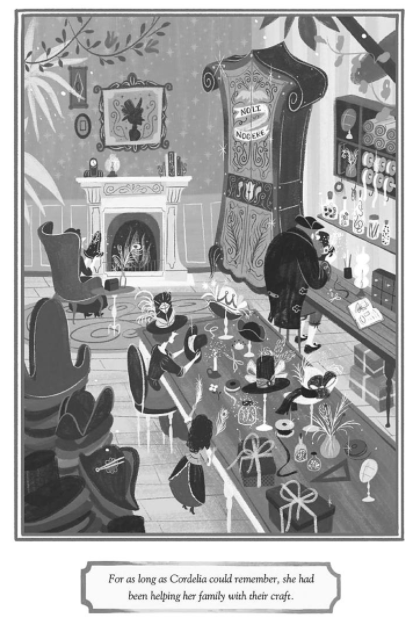 Tamzin Merchant’s fantastical London showcases her whimsical and elegant storytelling style. Steeped in adventure, humor, and friendship The Hatmakers is a magical read for all lovers of fantasy. This story follows some real historical events, including King George III and his issues with France, but also weaves in fantastical plot points, such as King George III “going mad” from wearing addleskin snake boots.

Merchant’s characters really pop off the page with their variety of personalities. Cordelia’s tenacity and feistiness carry through the narration and bring home the fact that she will follow her heart no matter what. Even though her family hates the Bootmaker family, Cordelia never allows their prejudice to ruin her friendship with Goose Bootmaker. And even when no one believes her father is alive, Cordelia never stops searching for him. Merchant’s side characters are just as delightful as her main character from anxious-but-loyal Goose Bootmaker to charismatic Sir Gushforth to stalwart Great Aunt Petronella. Each character adds to the tension of the story while sprinkling humor along their way.

The magic system is woven through the plot and setting so seamlessly that, like Cordelia, you’ll be begging to go into the Hatmaker workshop too. The Hatmakers Make each hat magical by adding special ingredients. To Make the Peace Hat they use lullwool felt, pax pearl shells, cordial blossoms, and sage ribbons. They then stitch on a rune symbol for peace. But another important aspect of the magic is that it must be balanced. If there is one magical item that is too powerful, it can overwhelm someone and harm them. Cordelia learns this lesson when she Makes a hat for Sir Hugo Gushforth to help him with his stage fright and embellishes his hat with a tail of an upstart crow and a Loquacious Lily. The unbalanced hat causes the actor to jump into scenes he doesn’t belong in and shout monologues to unsuspecting pedestrians.

Middle grade readers will love traipsing around Merchant’s whimsical London from the secret palace passages to the abandoned guildhall filled with its dusty mannequins and stone Maker with a crumbling hat. The Hatmakers workshop alone is a world onto itself with ticklish floorboards, invisible cabinets, and grouchy, toe-tripping hearthrug. The workshop is filled with fascinating ingredients like Dwam Threads, Moonwing Feathers, and Sooth Crystals. And let’s not forget the alchemy parlor where great-aunt Petronella reigns over multicolored fires, crystal lights, and telescopes propped out the windows. I can definitely sympathize with Cordelia who can’t wait for her lessons to end so she can spend the rest of her day in the workshop.

Parental Considerations: This story contains mild violence. Cordelia also recounts the death of her mother. Additionally, child homelessness is touched upon in this book.

The Hatmakers is a fast-paced, playful read that will make a great addition to your fantasy collection.  If your kids enjoy Jessica Towsend’s Nevermoor and Natalie Lloyd’s A Snicker of Magic then The Hatmakers is a must read.

To Learn more about The Hatmakers and its sequel The Mapmakers click here.

You can find The Hatmakers at these booksellers