Today’s holiday is simple, and one, I think we’d all consider pretty aww-some. Penguin Awareness Day was established so that we can learn about and appreciate these flightless birds that always look as if they’re ready for a party. To celebrate, why not visit a local aquarium or zoo, watch a favorite penguin-centric movie or show, or read a penguin-inspired book—like the one I’m reviewing today!

Elliot preferred a tuxedo over his dad’s green-checked suit and quiet over chaos, but when his dad suggested they go to the aquarium for Family Fun Day, he politely accepted the invitation. Once there, though, Elliot’s dad settled in on a bench with his National Geographic magazine and let Elliot explore. He bypassed the shark tank, jellyfish exhibit, and hands-on tide pool, and found himself in the Penguin room. “In their tidy black feathered tuxedos with their proper posture, they reminded Elliot of himself.” Elliot even liked the audio display about the explorer Ferdinand Magellan, who discovered the Magellanic Penguin in 1519.

At lunchtime, Elliot found his dad and asked if he could have a penguin. “‘Sure,’” his father said, looking at a display of plush penguin toys. He gave his son twenty dollars. Elliot headed back to the penguin exhibit, waded over to the island, and chose the smallest penguin he could find. He snugged it into his backpack, collected his father, and went home. When his dad asked about his penguin, Elliot just told him it was in his backpack, and that was that.

“In his room, Elliot dialed the air conditioner down to its coldest setting. To create a skating pond for Magellan, he brought his wading pool upstairs and filled it with water. Soon Elliot and Magellan were skating round and round. Later, Elliot went to his father’s office and told him he had to go to the library to do research on Magellan. His dad told him, “‘When I was in third grade, I got Captain Cook.’”

Elliot rode his bike to the library with Magellan in the basket. The librarian helped them find information on penguins, and then on the way home they stopped at the store for ice and a snack. When they got home, Elliot’s dad asked how the research went. “‘Great! Magellan was perfect,’ Elliot said. ‘Just like Captain Cook,’ his father said.”

For dinner, they had anchovy pizza. Later, when Elliot’s father wanted ice cream, he almost caught Magellan napping in the freezer, but the little penguin had “politely moved the carton to the front of the freezer shelf.” In the morning, Magellan wanted to swim, so Elliot filled the bathtub and let him dive and paddle. Elliot had just left him alone, when his father announced he was going to “have a bit of a soak.” He was just pushing the door open when Elliot tried to stop him. “‘Wait! I left my penguin in there,’” he said. His dad promised to put him out of harm’s way and try not to splash.

Elliot ran to the bathroom, though, when he heard his father shout. Elliot found his dad neck deep in water with Magellan perched on his knee. “‘Young mad, where did this penguin come from?’” he wanted to know. “‘The southern tip of Argentina,’” Elliot answered. His father agreed and pointed to the big, green tortoise, waiting next to the tub. “‘As for Captain Cook,’ he added, ‘he came from the Galápagos Islands.’”

Toni Buzzeo’s instant classic father/son bonding story makes full humorous use of sly misunderstandings—but are they between father and son or with the reader? Clever word play keeps readers on ice, waiting to find out when Elliot’s father will discover Magellan and what will happen then. But alert readers may pick up on clues sprinkled throughout the story in both the dialogue and illustrations that lead to the perfect and satisfying ending. Elliot and his father may seem as if they’re on different wavelengths, but they are actually a well-matched pair of research-loving adventurers, and it seems that Dad is happy to pass down his experience to his son.

From the very first page, David Small’s black and white illustrations with touches of green, blue, and red establish both the setting and clues to the mystery, immediately making readers happily willing accomplices to Elliot’s efforts to satisfy and hide Magellan. Readers may begin to wonder if Elliot’s dad has a secret of his own, though, as he wears a turtleneck under his green, checkerboard patterned suit, lounges with his feet up on a rounded green footstool, and has office that boasts a turtle clock, tortoise anatomy posters, and a snack of chocolate turtle candies on a side table. Kids will love finding other turtle-inspired details, and they are sure to be charmed by the family camaraderie of Elliot, Magellan, Dad, and Captain Cook.

Sure to be a hit and a favorite for repeat readings, One Cool Friend is a terrific choice for home and classroom libraries.

Discover more about Toni Buzzeo and her books on her website.

To learn more about David Small, his books, and his art, visit his website.

Don’t throw away those empty spice bottles—instead make these cute penguins with their colorful hats who are just waiting to play! 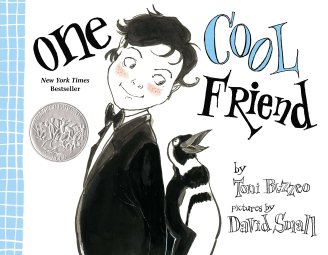 You can find One Cool Friend at these booksellers