Scott Brundage’s work has been featured in the New York Times, the Wall Street Journal, Scientific American, the Washington Post, and many others. He is the illustrator of A is for Astronaut: Blasting Through the Alphabet. He lives in New York City.

Today I’m happy to be talking with Scott Brundage about capturing the beauty and mystery of space, his talent for humor, and the surprising start to his art career.

The First Men Who Went to the Moon, written by Rhonda Gowler Greene, celebrates the 50th anniversary of the Apollo 11 moon landing. Your illustrations are astounding for their perspective and sense of action that captures the thrill and wonderment of the time. Can you talk about the research you did, how you approached creating these images, and your process?

Well thank you for those generous words about my work. I’m happy people have responded to the illustrations so positively.

When researching this book, I was lucky enough to have A is for Astronaut fresh in my mind. The Apollo 11 mission is a bit more specific than A is for Astronaut, being a specific time and year, but I’d already learned a lot about how to find good NASA references.

I faced the same challenge as last time: since NASA’s photography is public domain and already gorgeous, what could I bring to this book that hasn’t been seen already? I couldn’t riff as much as last time, but I could at least try to capture what it might have been like to be in the Apollo 11 crew’s shoes (space boots?). Some illustrations  also were simply trying to capture the emotion that Rhonda Gowler Greene was expressing with her words. The moon is beautiful, but distant, cold and still. I wanted to show all of that if I could.

Which illustration in the book is your favorite and why?

I think the spread on pages 22-23 is my favorite, the one depicting all the footprints in the shadow of the planted flag. I like when I can get away with not quite showing the subject of a painting, but the audience knows what they’re seeing. And without getting too

artsy, I thought it was a good metaphor for the book itself. We went to the moon, left our mark, and came back. The footprints are still there on the cold surface in the shadow of our flag.

What were your favorite books as a child and whose art or illustration work did you admire growing up?

I had to ask my mom for this answer. I don’t remember having a favorite, all I could think of are cool picture books I appreciate now as an adult. Turns out, according to my mom, I much preferred to just look through our encyclopedia and then report dinosaur facts to whoever would listen.

How did you get into illustrating children’s books and what do you enjoy most about the work?

I got into picture books relatively organically, having touched on almost every other type of illustration market first. I started out doing small illustrations for magazines and newspapers. That slowly led me to book covers and middle grade chapter books that had a lot of interior black and white illustration. Along the way, I would help a couple independent authors with their self-published picture books. After a while, I just had a stack of children’s picture book illustrations in my portfolio. So when my agent asked if I was interested in doing a picture book with a real publisher, I was more than ready to jump in.

Picture books are great because you can really chew on a subject or set of characters way longer than you can for a book cover or spot illustration. I know way more about how space suits work, I’m familiar with a weird number of features on the International Space Station, and know exactly what color suits the Apollo 11 crew were wearing in their ticker tape parade. It’s really fun to get that deep for a book.

Is it true you got your start professionally by designing a bicycle helmet? How did that come about? What was your design?

This is true. My first paying gig was a Bell Helmet’s kid’s helmet design. My art school instructor, the great children’s book illustrator Brian Biggs, had a contact with the designer at Bell Helmets and set up a contest among his students to submit designs for a possible helmet. They’d pick the winner and see if it could get produced. I send in two designs, one of happy robots on an alien landscape, another of cute little lizards attacking a city. Somehow both designs won the contest  The timing, however, was a little unfortunate for the lizards attacking the city since it was just after 9/11, but the robots ended up adorning the heads of dozens of kids nationwide.

I was fortunate enough to review A is for Astronaut: Blasting through the Alphabet—your picture book with author and former astronaut Clayton Anderson. I was blown away by the stunning details—including spacecraft, the NASA control room, and space itself—on every page. What kinds of choices did you make in creating the illustrations to make the information come alive for kids?

A is for Astronaut was a blast to work on. I had a bit of freedom in interpreting each chapter, so a lot of it was figuring out I could make an image portray the idea of each letter clearly. For the more straightforward words like galaxy or blastoff, showing how it is to be a kid experiencing those awe-inspiring event/sights for the first time. And, when possible, if I could find a way to blend two words/ideas into a single spread, that was even more fun.

Your editorial illustrations have appeared in magazines, newspapers, and other publications, and you’re now working as an animator for the Showtime series Our Cartoon President. Do you have a natural knack for humor and infusing it into your art or how did that develop?

When I was in school, I was really into dark scary artwork and literature. Loved creepy drawings and painting, reading horror stories, listening to dark music. I tried my hand at doing some moody paintings in oil about serious subjects. But, my personality is that of a very silly man. And if you looked at my sketchbooks at the same time, it was all goofy drawings to make myself and others laugh. Eventually I realized I should just lean into what came naturally, and that was the funnier whimsical stuff. I’m definitely much more suited to making a weird face, taking a photo of myself, then applying that face to a character than I am at trying to scare someone.

What’s up next for you?

I’m just starting up a new picture book about a guy and his dog. No astronauts this time around.

And I’m also working on the second season of Our Cartoon President.

Thanks, Scott! It’s been so great chatting with you! I wish you all the best with The First Men Who Went to the Moon and all of your work!

You can connect with Scott Brundage on 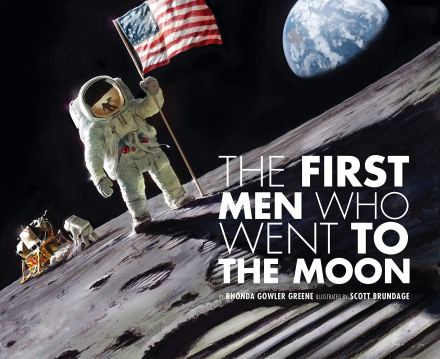 No matter whether you live in a house or an apartment, in a city, in a small town, or on a farm, but you can travel anywhere through books. The magic of reading lies in its ability to transport readers through history, into emotional landscapes, and to far-away places – even into outer space as today’s book shows!

The First Men Who Went to the Moon

The astronauts get a view of Earth as they reach for the blackness of space. The Lunar Module Eagle touches down on the surface of the Moon in “…the Sea of Tranquility / where the astronauts made history….” First Neil Armstrong and then Buzz Aldrin descended onto the Moon carrying an American flag. “This is their mark, a ‘leap for mankind.’ / And this is the flag they left behind / there in the Sea of Tranquility.”

In a spectacular show of human achievement, the Command Module Columbia returned in a “…splashdown that brought them home, / safe and sound from a vast unknown, / where they made their mark, a ‘leap for mankind.’” With ticker tape parades attended by thousands of people, the astronauts were celebrated in New York City and Chicago.

In addition to Rhonda Gowler Green’s poem, many of the double-spread illustration contain facts about the mission, features of the Moon, the astronauts’ work, and splashdown.

Back matter includes information on where the Eagle and Columbia are now; more facts about the mission, the astronauts, and the equipment; resources; and a list of other books for young readers.

Mirroring the circular mission that took the astronauts to the Moon and back, Rhonda Gowler Greene’s lyrical verses build on each other, overlapping to create depth in her storytelling and awe in the scientific achievement of NASA in 1969. As the poem reverses, readers engage in the feeling of pride and relief that Americans and people all around the world experienced as they watched Columbia splash down safely into the Pacific Ocean. Greene peppers the story with beautiful images take readers from “swirls of clouds” to a  “desolate land” to “the dust of lunar ground” and helps them recapture the mystery and amazement of those days 50 years ago.

Scott Brundage’s illustrations are remarkable for their detail and ability to transport readers to the heart of the Apollo 11 mission. Today’s children, familiar with satellite images and feeds from space and who have grown up with the International Space Station, cannot fully appreciate with what wonder and trepidation the world watched the mission on television. Choosing a variety of perspectives, Brundage allows kids to watch the rocket launch from the pad in Florida, look out of the spacecraft’s window as the astronauts leave Earth behind, see the Eagle light up the Moon’s surface as it lands, and view Neil Armstrong take that first step onto the Moon. Space lovers will want to linger over every two-page spread to take in all of the minute details as well as the inspiration that space stirs in the dreams of many.

A lyrical and gorgeous tribute to the Apollo 11 mission for its 50th anniversary, The First Men Who Went to the Moon would make a lovely addition to home, classroom, and public library collections for science and space lovers, STEM lessons, and story time.

Discover more about Rhonda Gowler Greene and her books on her website.

To learn more about Scott Brundage, his books, his art, and more, visit his website.

You can download and print a fun The First Men Who Went to the Moon Activity Sheet!

Rocket to the Moon! Maze

Help the rocket find its way through space and land on the moon in this printable puzzle! 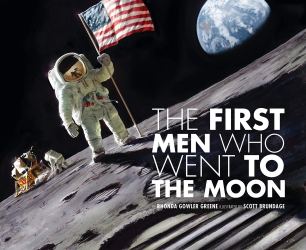