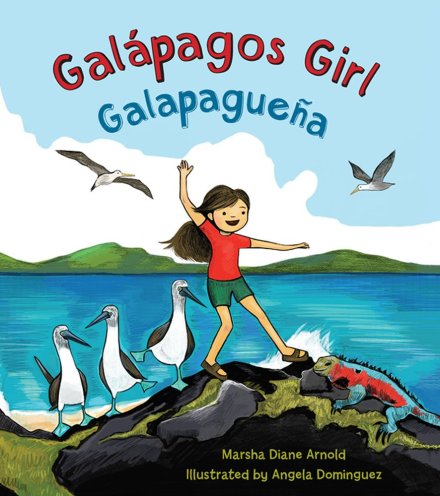 National Wildlife Day was established in 2005 by author and pet lifestyle expert Colleen Paige in memory of conservationist Steve Irwin. The day promotes awareness of the importance of conservation of animals, habitats, and the environment worldwide and offers education on the number of endangered and threatened species across the globe. To honor today’s holiday, visit a local zoo, aquarium, or other nature preserve and take some time to learn about what you can do to help protect the environment.

Lee & Low Books sent me a copy of Galápagos Girl/ Galápagueña to check out. All opinions are my own.

I’m thrilled to have award-winning picture book author Marsha Diane Arnold as a guest blogger today revealing a bit of the backstory of Galápagos Girl / Galápagueña. Her past titles include the Smithsonian Notable Book The Pumpkin Runner and Lost. Found., which received three starred reviews. With more than one million books sold, Marsha’s stories have been called “whimsical,” “wacky,” “heartwarming,” and “uplifting” by captivated young readers. Marsha was inspired to write this story after traveling to the Galápagos Islands, where she met Valentina Cruz and had the opportunity to swim with sea lions and dolphins. She lives with her family in Alva, Florida.

Thank you, Kathryn, for having me visit your site on National Wildlife Day. It’s a perfect day to celebrate my newest book, Galápagos Girl / Galápagueña, along with conservation of wild places and animals!

As a child, would you have enjoyed swimming with sea lions? Feeding plums to giant tortoises by hand? Having warblers fly through your house? That was the life of Valentina Cruz. Galápagos Girl is based on her idyllic life on remote Floreana island in the Galápagos Islands, a volcanic archipelago west of Ecuador.

My photos of actual blue-footed booby and Galápagos marine iguana.

Valentina grew up surrounded by nature, but perhaps more accurately, she grew up in nature. I think when a child grows up seeing wild wonders every day, they grow up respecting and protecting nature and wildlife. Valentina and her siblings certainly did. She grew up to be a biologist and naturalist guide. One brother, Eliecer Cruz, was director of the Galápagos National Park and, later, director of the Galápagos branch of the World Wildlife Fund. Another brother, Felipe, worked on many projects with the Charles Darwin Research Station, including studying the challenges that face the Galápagos petrel. Her sister, Marilyn, is director of Galápagos Biosecurity Agency, which helps control and prevent invasive species in the islands.

In some ways, Valentina’s childhood was similar to mine. She was surrounded by a loving family—her parents and eleven brothers and sisters. I only had one brother, but along with my parents, cousins, aunts, and uncles, we gathered on many Sunday afternoons at my grandmother’s house. Valentina and I both delighted in nature, though hers was a more exotic nature—the distant Galápagos Islands, where Charles Darwin discovered those famous finches and came up with his theory of natural selection. Mine was a small farm on the Kansas plains—I didn’t see the ocean until I was an adult. Valentina had Galápagos tortoises as pets and swam with sea lions. (Of course, keeping tortoises as pets is not allowed today.) I played with my neighbor’s pet raccoon (also, not allowed today) and listened to the meadowlark’s song from the roof of my house.

Valentina loves nature, home, and family, but has the soul of an adventurer. I’m much the same. When I grew up I yearned to see as much of the world as possible. When my long-time traveling buddy, Jean Gallagher, asked me to travel with her to the Galápagos, one of my long-time dreams came true.

The Galápagos Gang – fellow travelers to a far-off land. Jean is 3rd to right in front. I am 4th.

It was on that 2007 trip that I met Valentina, one of our naturalist guides. With her, we visited Floreana and saw the home where she grew up. I was enamored. I thought how wonderful a book about the islands and their unique wildlife, woven together with Valentina’s childhood, would be. Yet it wasn’t until April 2009 that I emailed Valentina and told her of my dream to write a picture book based on her life. Over months and years, Valentina generously shared her stories with me.

Valentina showing us the lay of the land.

Valentina got her sense of adventure and love of nature from her father, Eliecer Cruz Cevallos, who first arrived in the Galápagos in 1939. He was one of only 100 people living in the Galápagos at that time!

Eliecer returned to Ecuador and married Valentina’s mother, Emma Bedon. She made him promise they would never live in the Galápagos. Who can blame her? They’d have almost no human neighbors! But in 1944, she changed her mind. Emma sailed to Floreana with Eliecer to build a life together. Valentina told me that even living in the wild, her mother taught her children “to keep all the rules of a city so we do not grow up wild.”

Valentina and her father on Floreana

Valentina, her mother, and her sister

Two Galápagos tortoises were a big part of Valentina’s childhood, so I had to include them in Galápagos Girl. Floreana tortoise had long been extinct (or so it was thought).  So when Eliecer moved to Floreana, his friend gave him young tortoises from other islands. Eventually, the family released the tortoises to roam free. One of the most exciting things that happened to Valentina as a child was seeing the tortoises return to their farm that first year after their release. The main reason was the tasty plums dropping from the trees. Every year after that, when the plums ripened, the family waited for the tortoises to return. They always did! 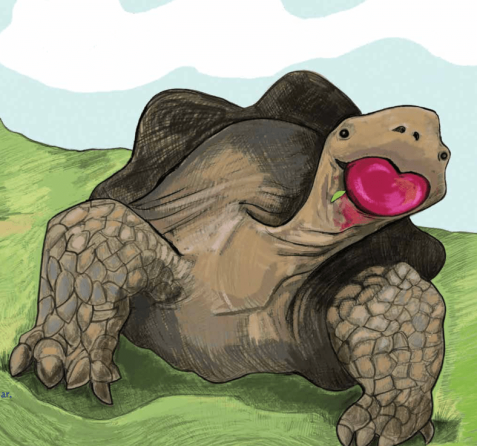 The tortoise story changed several times during the writing of my book due to Valentina’s remembering more over time, checking facts with her family, and a discovery near Wolf Volcano on Isabela, another Galápagos Island. What’s in my book isn’t exactly the way things were, but it’s close to the real story. As Valentina wisely shared: “Each of us remember things in different ways. Our memory is like pictures of what impresses us in that specific moment, so everything can be true and everything can be fiction.” 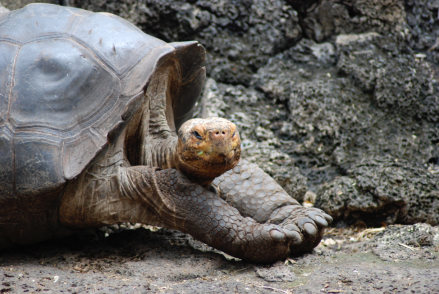 One of eleven species of Galápagos tortoise

Regarding the exciting discovery on Wolf Volcano, scientists recently found tortoises there that carry some of the Floreana tortoise genes! There is a project now to bring these tortoises back to Floreana. Wouldn’t it be wonderful to have partial Floreana tortoises wandering freely, restoring the ecology of Floreana?

You may ask, “How did Floreana tortoises get on Isabela Island?” That’s one more fascinating question about the Galápagos. If I visit your school, you can ask me and I’ll share more.

Thanks so much, Marsha, for sharing the fascinating story behind Galápagos Girl / Galápagueña!

You can connect with Marsha Diane Arnold on

On the day when baby Valentina joined Mamá, Papá, and eleven brothers and sisters, even the sea lions, blue-footed boobies, and iguanas seemed to welcome her to the “island formed by fire.” Valentina loved growing up on the Galápagos Island of Floreana. She explored the lava rocks, where Sally Lightfoot crabs scuttled back and forth. She swam with dolphins and manta rays, and even played with penguins. 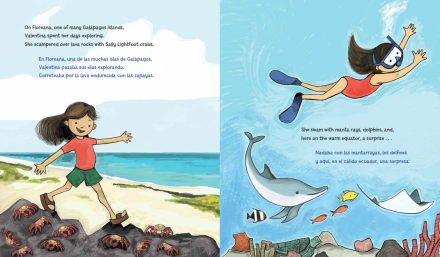 At home, Valentina’s family shared their home with two giant tortoises—Carlitos and Isabella. One day Papá told Valentina their story as they fed the tortoises plums that had fallen from their backyard trees. Papá had gotten Carlitos and Isabella from a friend when he first moved to Floreana. Although it was nearly impossible to imagine now that the tortoises were grown, at the time they were so small that they fit into Papá’s pockets.

There was also a sad note to Papá’s story. He said that while giant tortoises still lived on other Galápagos islands, pirates and whalers had wiped out the population on Floreana. Papá went on to tell Valentina that many Galápagos animals were in danger. They were “threatened by other animals that don’t belong here. Threatened by people who don’t understand how to care for our islands.” Valentina promised that she would always protect them.

When she was older, Valentina left the island to go to school. She didn’t want to leave her beautiful home, but Mamá told her that she was “ready to learn about the world beyond.” And Papá reminded her that “like our islands, you have a heart full of fire.” On school vacations, Valentina always came back to study the wildlife on the Galápagos islands. She had not forgotten her promise to keep them safe.

After she graduated with a degree in biology, Valentina returned to the islands as a nature guide to teach visitors about the beauty and uniqueness of the Galápagos. Some visitors were even lucky enough to meet Carlitos and Isabella when the plums dropped from the trees and the two old tortoises returned from exploring Floreana to eat them. Because of Valentina’s commitment to the Galápagos, her visitors also made a promise to always remember and protect them.

Extensive backmatter includes an Author’s Note about Valentina Cruz, the tortoises Carlitos and Isabella, and the history of tortoises on Floreana. There is also information on the Galápagos as well as fun facts about all of the animals in the story. A bibliography of sources invites readers to learn more.

Each two-page spread presents the text in English and translated into Spanish by Adriana Dominguez.

Marsha Diane Arnold’s lyrical and buoyant passages sing with the carefree joy Valentina felt as a girl exploring her beloved Galápagos and which brought her back home as a biologist to protect them. After seeing Valentina playing and swimming with the native animals and feeding Carlitos and Isabella, readers will also feel Valentina’s sadness at the dangers they face and want to make a positive difference to the environment and the world around them. Arnold’s dialogue-rich storytelling highlights the personal nature of the subject and will draw children into Valentina’s world. 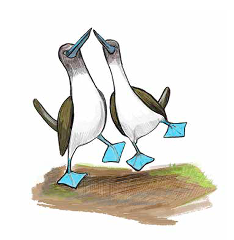 Saturated with glorious color, each of Angela Dominguez’s illustrations is a celebration of the splendor of the Galápagos. Playful sea lions, high-stepping blue-footed boobies, scampering crabs, and even a sneezing iguana will captivate young readers and inspire them to learn more about these creatures and the islands. Images of Valentina camping out to study the animals during school breaks will excite environmentally conscious kids, and pictures of Carlitos and Isabella happily munching on plums will generate smiles and “awwws.”

Galápagos Girl / Galapagueña will excite kids to learn more not only about the Galápagos region but about their own local environment, and the call to action will spark an enthusiasm for protecting the earth’s animals. The book would make an inspiring addition to home bookshelves and an excellent way to begin classroom discussions on environmental issues and science lessons. The engaging Spanish translation will delight Spanish-speaking and bilingual families.

Discover more about Marsha Diane Arnold and her books on her website.

To learn more about Angela Dominguez, her books, and her art, visit her website. 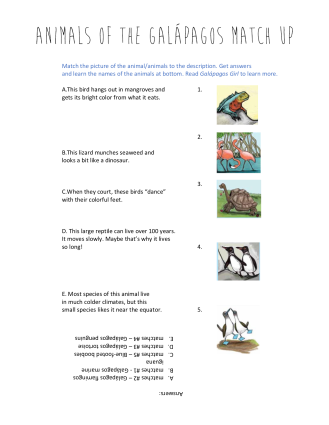 Animals of the Galápagos Match Up Puzzle

There are so many fascinating animals that live in the Galápagos! Can you match the picture of each animal to its description in this printable Animals of the Galápagos Match Up Puzzle? You can find and download the activity sheet from the Lee & Low Books website:

Animals of the Galápagos Match Up Puzzle 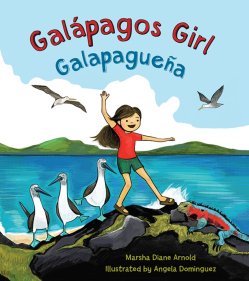 You can find Galápagos Girl / Galapagueña at these booksellers