Ice cream has a long and elite history, dating back to Ancient Greece when a rudimentary version of the confection was made of snow, honey, and fruit. It wasn’t until the 16th century, when Catherine de’ Medici introduced the treat again, that a true ice cream was created. One hundred years later, Charles I of England used his royal clout to proclaim ice cream the prerogative of the crown. He paid to keep the recipe secret and forbid the common people from eating it. He and future royals must have known a thing or two about proprietary information as the first recipes for ice cream were not recorded until the 18th century.

A little boy writes a letter to his grandpa telling him about his summer. “So far it’s been a delicious summer,” he says of his ice cream extravaganza. The boy reports that he’s very busy, but is also paying attention to school work every day. He knows how to read big words like tornado and explosion, and he is even creating his own book. He can solve math problems—even word problems—lickity split on his own or sometimes with his family’s help.

At day camp he and his friends are involved in all sorts of activities, such as sports, cartography, and field trips. The boy tells his grandpa that he’s poring over the encyclopedias his grandpa sent, learning about world history from Ancient China to Europe and America. In fact, he is discovering fabulous inventions and designing some of his own.

He assures his grandpa that he has “been working hard all summer (though I always take a break on sundaes)” and has earned the special trip his grandpa mentioned. When the two meet, it’s obvious that Grandpa understands his grandson very well. They both sport ice cream shaped backpacks, and the trip they are embarking on is a hike to the tip of Ice Cream Peak. 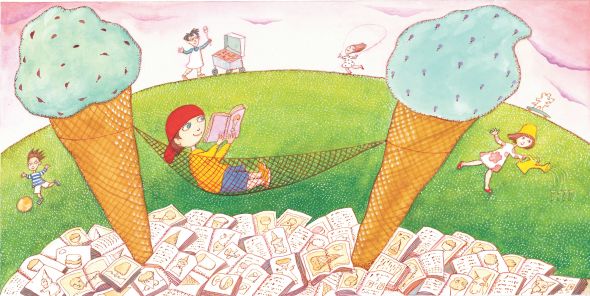 Peter Sís’s celebration of ice cream is a perfect mixture of text and art. While the boy’s letter is kid-like bare bones, the ice-cream hued illustrations humorously and cleverly portray the boy’s delicious obsession. His room, with its scoop-shaped window overlooking an ice cream factory, is filled with a bed, bookshelves, desk, and toys that are all familiarly conical. The boy builds his sandcastle, complete with cone turrets, at the edge of a shore washed by multi-colored scoop waves, and the family’s beach umbrella is a whipped sundae top.

At day camp all roads lead to flavorful sites where skyscrapers, attractions, and transportation are all seen through a sweet ice-cream cone lens. Even the Statue of Liberty holds aloft a vanilla soft serve cone. The boy’s travels through history reveal fascinating facts about the invention of ice cream, discuss how it spread across Europe and came to America, and depict innovations of and improvements to this favorite treat.

The final image of Ice Cream Peak, with its sprinkles-covered tip will delight ice cream aficionados of all ages. Kids and adults will want to linger over each page to scoop up all the visual pleasures. 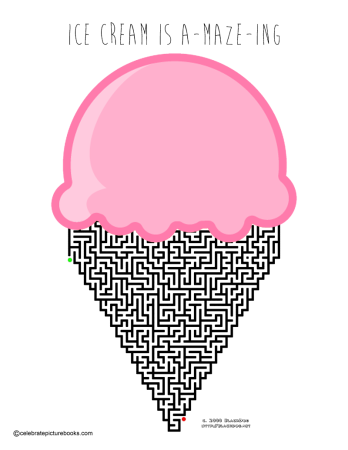 Sometimes you’d walk through any kind of obstacle to get your favorite flavor ice-cream cone. Have fun following the path through this printable Ice Cream is Amaze-ing Puzzle!