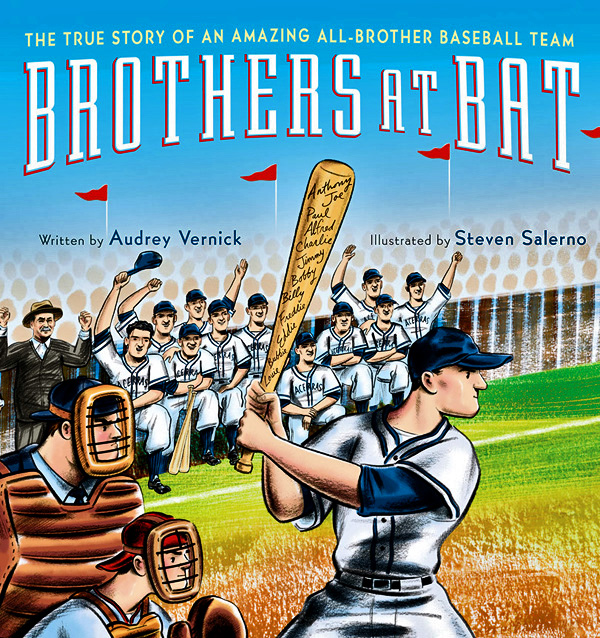 National Family Month was established by KidsPeace and is observed in the weeks between Mother’s Day and Father’s Day to encourage families to spend time together. Now that the school year is coming to a close, it’s the perfect time to plan some fun activities!

Brothers at Bat: The True Story of an Amazing All-Brother Baseball Team

When the weather warms and kids’ thoughts turn to sports, the afternoon air rings with the sounds of slamming doors as players race from home to the baseball diamond. Back in the 1920s and ‘30s, the same door slammed not once or twice, not three or four times, not even eight or nine! The door shut behind 12 brothers! Anthony, Joe, Paul, Alfred, Charlie, Jimmy, Bobby, Billy, Freddie, Eddie, Bubbie, and Louie Acerra. These 12 boys also had 4 sisters—but this is a story about baseball, and back then girls didn’t play ball.

It could be said that “baseball set the rhythm of their lives.” Neighbors couldn’t remember a time when Acerra boys weren’t throwing or hitting a ball or running the bases at the local park. And there was an Acerra on the high school baseball team for 22 years in a row!

In 1938 the nine oldest brothers formed a semi-pro team and competed against other New Jersey teams and teams from New York and Connecticut. Their dad was their coach. The brothers all had different skills—Anthony could hit homeruns, and even hit a couple into the Atlantic Ocean from a seaside park; Charlie was a slow runner; and Jimmy had a knuckleball that was unhittable and uncatchable.

But playing had its dangers too. In one game Alfred was going to bunt, but the ball bounced badly off the bat and hit him in the face. He was rushed to the hospital, but the accident caused him to lose an eye. Everyone thought he would never play again. But after he healed, his brothers helped him recover his skills and his courage.

During World War II six of the brothers joined the war effort and spent years apart. Far from home they dreamed of the days when they played together on warm afternoons. When the war ended all the Acerra boys came home to their very happy mother. The brothers got back to what they loved doing best. Now Anthony was their coach, and from 1946 to 1952 they won the Long Branch City Twilight Baseball League championship four times—much to the pleasure of the crowds that came out to watch the Acerras play.

As time went on the Acerras got jobs, married, and had families of their own. In 1952 the brothers played their last game as a team, having made history as the longest-playing, all-brother baseball team ever. Even though the Acerras played many, years ago, people have not forgotten them. In 1997 they were honored by the Baseball Hall of Fame. The surviving seven brothers made the trip along with one sister and more than a hundred relatives. Now Jimmy Acerra’s uniform and glove are on display alongside exhibits about Babe Ruth, Ty Cobb, and Willie Mays. If you visit the Baseball Hall of Fame, you can see them too!

Interesting and personal author’s and artist’s notes follow the text.

Baseball fans will love Audrey Vernick’s exciting, true story of this most unusual team. Her focus on the close relationship of the Acerra brothers elevates the tale from merely a sports story to one that reveals deep affection and support during difficult times. The different personalities of the brothers shine through in Vernick’s easy, conversational tone, and the inclusion of the Acerra brothers’ induction into the Baseball Hall of Fame shows that this story lives on for all generations.

Steven Salerno’s evocative illustrations will transport readers into a past where neighborhood leagues enjoyed the same level of loyalty as the majors. Capturing the brushed style, colors, and portraiture of pictures of the period, Salerno shows kids not only what it meant to be a baseball player in the 1930s and 40s, but what it meant to be a family. 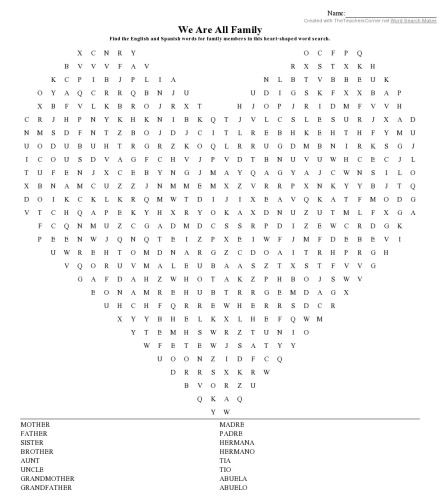 We Are All Family English – Spanish Word Search

This month is all about family! Find the words for special relatives in this English – Spanish dual language word search! Print the We Are All Family word search puzzle here! And here’s the Solution!